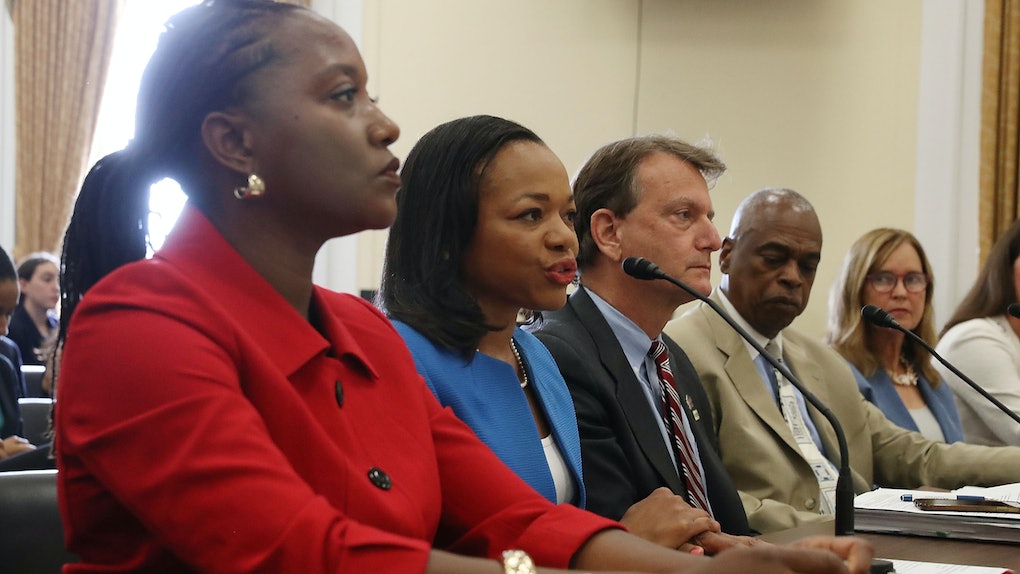 Earlier in May, Georgia gubernatorial candidate Stacey Abrams made history, becoming the first black woman ever to win a major party's nomination for governor of an American state. Abrams' Democratic primary win was a milestone for black women in politics but, weeks later, a new report from Axios reveals a feeling of discontent among her peers who are similarly seeking election in 2018. Black women running for office don't feel supported by the Democratic Party, the report says, and the numbers give a pretty good indication why.

Among the 43 black women running for seats in the House of Representatives, only one has been endorsed by the Democratic Congressional Campaign Committee (DCCC), the body that works to elect Democrats to Congress, the report says.

Axios' report alludes to caveats that are important to the question of who gets endorsed — like a lack of money raised by black candidates and scenarios in which those candidates are seeking to win primaries against Democrats already in office.

Still a report of black female candidates feeling a lack of support is worth noting for two reasons. First, there's recent history. For the past year, major figures within the party have repeated a line, that black women are the "backbone of the Democratic party."

In December, after 98 percent of black women who went to the polls for Alabama's special election voted for Doug Jones, helping him become the first Democrat to win a Senate race in the state in decades, party chairman Tom Perez tweeted, "Let me be clear: We won in Alabama and Virginia because #BlackWomen led us to victory. Black women are the backbone of the Democratic Party, and we can’t take that for granted. Period."

In a statement to Axios, the Democratic National Committee (DNC) made a similar comment.

"While the DNC does not endorse in contested primaries, we work with our state parties to make sure first-time candidates have the tools and information they need," the statement reads. "African-American women are the backbone of the Democratic Party, and we know we can't take them for granted. That's why we've made meaningful investments in our state parties in order to turn out and engage women of color."

Besides the recent history of a renewed Democratic appeal to black women, there's a more distant history that informs how people should look at black candidates' chances of getting elected to office. During May, many outlets have run pieces about black candidates' bid to have success in the 2018 midterm elections — including Axios, Politico, The Washington Post, and Elite Daily.

All of the pieces note a history of those candidates being overlooked.

Dr. Wendy Smooth, a contributor to the Gender Watch 2018 project, told Elite Daily earlier this spring, "Black women have always viewed themselves as political actors. It's just that we have not, as scholars and political pundits, paid as much attention to their activism."

Quentin James, the co-founder of a political action committee (PAC) that focuses on black candidates told Politico pretty much the same.

"There have been historical challenges with candidates of color receiving support from institutions, both the party and progressive groups. The history’s there," James said. "There’s a challenge there of, I’m calling it imagination, but some call it viability. ‘Can the black candidate win?’ ‘Can the Latino candidate win?’"

Now, considering both the more recent history and the distant past, a report about black women running for office, and their discontent with the amount of support coming from the Democratic party, at the very least makes it worth wondering whether those candidates are being overlooked again.