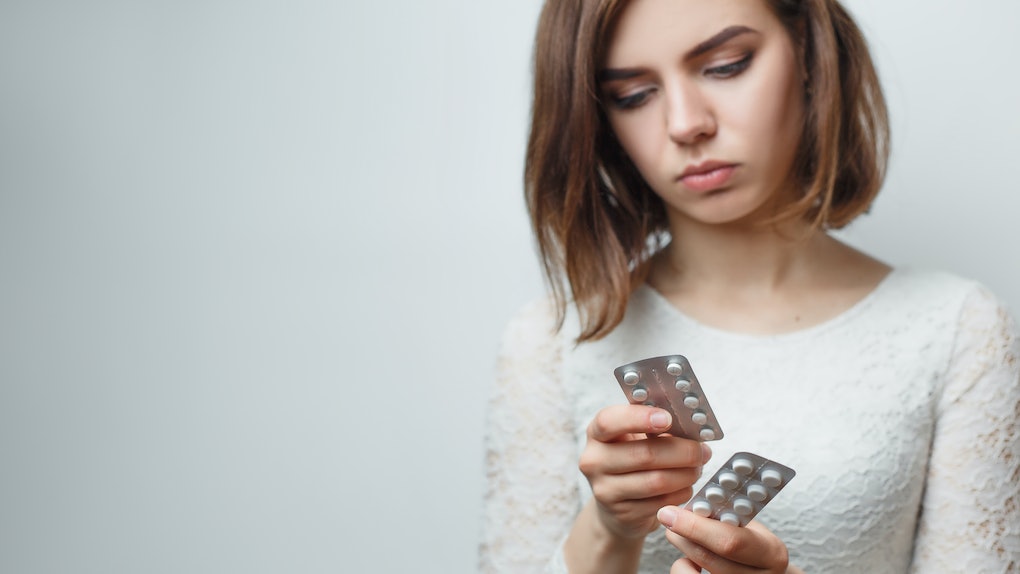 Birth Control & Breast Cancer Have Been Linked In A New Study, But Don't Freak Out

When filling out forms at the doctor’s office and a question asks if you're currently on medication, do you remember to jot down the name of your hormonal birth control? Oftentimes, women don’t consider the pack of birth control pills in their clutch a traditional form of meds, but hormonal contraception is, indeed, a prescription, and with any medication comes possible side effects. Yes, birth control is meant to regulate your period and do the body good, but according to new research, there may be an increased risk factor in the link between some birth control pills and breast cancer.

The ongoing conversation surrounding whether or not women can develop breast cancer from taking hormonal birth control has died down and resurfaced numerous times over the years. In reality, the possibility has always been there, but as formulas improved, the risk factor was, supposedly, lower than it had been in years past. Unfortunately, however, a recent study published in the The New England Journal of Medicine has found that women using certain, modern birth control pills and IUDs might actually be at a higher risk.

A specific type of hormonal birth control could potentially be linked to an increased risk of developing breast cancer.

The New York Times reports that, even though research suggests women who use modern forms of hormonal contraception only face a small risk of developing breast cancer, the newly reported increase in percentage is still pretty significant, and something to be aware of.

The study assessed nearly two million Danish women in an effort to shed new light on the assumptions that modern birth control provides young women with less of a risk of developing breast cancer compared to the high-estrogen options that might have been prescribed to their mothers and grandmothers years ago. Despite lowering the dosage of estrogen in contemporary hormonal contraception like birth control pills and IUDs, however, the study found that for every 100,00 women using these medications, there are 68 cases of breast cancer diagnosed. So, like I said, the chances of developing breast cancer from hormonal birth control are still pretty slim, but these numbers are definitely something to think about when you consider what method of contraception you want to be using.

The thing is, even though the dosage of estrogen has been lowered in the modern hormonal birth control we use today, there's still a significant amount of the hormone progestin used to regulate a woman's menstrual cycle. This combination of hormones, according to the research, could be why we're seeing an increase in breast cancer risk.

If you're feeling concerned, there are some forms of birth control that don't release those hormones into the body.

Although the risk of developing breast cancer by using hormonal birth control is still relatively low, it’s important to do your research and talk to your doctor about the non-hormonal options available to you.

For example, did you know that there's such thing as a non-hormonal IUD? The sister device to the hormonal method is known as the ParaGard, and it's made with copper that's released into the uterus to combat sperm. According to Healthline, this form of birth control is 99 percent effective, and can last up to 10 years.

If you’re on the fence about IUDs and are looking for something a little less permanent, barrier methods are an excellent option. For instance, condoms are probably the most popular and readily available method on the market, so it's not a bad idea to buy a pack and keep one or two in your purse, just in case. Other barrier methods sans hormones, such as the contraceptive sponge, cervical cap, and a diaphragm, can all be inserted into your vagina prior to sex, and taken out afterward.

These forms of birth control are pretty effective when used correctly, but it's important to note that their sole purpose is to prevent pregnancy. Hormonal birth controls like the pill and hormonal IUD are also used to combat medical conditions, such as painful premenstrual symptoms and PCOS, so before taking it upon yourself to make the switch, a discussion needs to be had with your doctor to make sure the change would even be beneficial to your body.

If you're still feeling freaked out about all of this, the best way to put your mind at ease is to talk to your doctor about it.

Personally, I'm that patient who always comes into an appointment with a list of questions at the ready for my gynecologist. Remember, there is no such thing as stupid question, and with researchers coming up with all these new studies and test results, it's important to keep on top of things — especially when it has to do with your body and your health.

So, if you're feeling anxious about the connection between birth control and breast cancer, it may be worth checking in with your doctor to discuss these new findings and whether or not switching to a non-hormonal form of contraception is right for you. Again, the odds that you're at risk are pretty slim, but you're the only one who can decide what's best for your body.