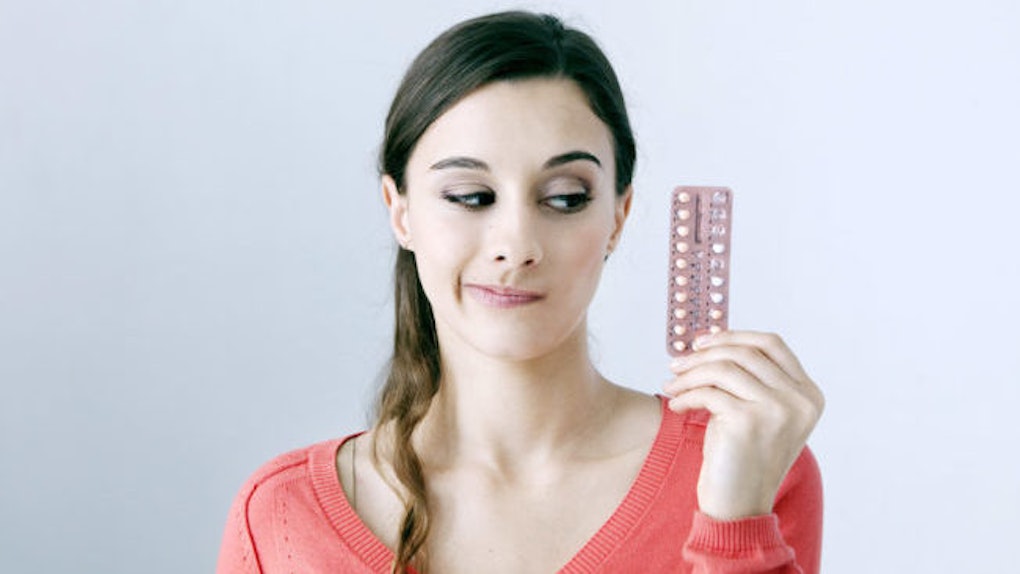 The birth control pill is the contraceptive method of choice for many women.

The pill is generally not too difficult to get, it's relatively easy to use, and it's pretty effective. A lot of women have used it for years and are really happy with it.

Unfortunately, women don't always get the best information they need about the pill. Not only do we get advice from our doctors (of course), but a lot of us have also taken advice or information from our moms or friends. And because of this, there are many myths about the pill that we were told when we were teenagers or in our early adulthood that are just plain wrong.

To correct some of this misinformation, I did some research and spoke to an expert to bust up some of the myths about the pill that some of us still believe.

1. The Pill Makes You Gain Weight

Many women believe that the pill makes you gain a ton of weight. When I first started researching the pill as an option in college, friends who had been on it also told me this.

But OBGYN Dr. Sheila Loanzon says that, in reality, birth control pills probably won't cause weight gain: "When someone is on the lowest dosage pill, along with a balanced diet and exercise, the likelihood of weight gain is very low. The available data suggest that oral contraceptives do not cause weight gain."

The truth is that while women may gain weight on the pill, some will lose it. And of the women who do gain weight, it's probably not due to the pill itself.

Of the two hormones in most birth control pills — estrogen and progestin — estrogen might make you feel bloated, so you could feel like you're carrying around more weight. But this is temporary. It's true that progestin may increase your appetite, but that's not the pill directly causing weight gain.

So it's unlikely that just going on the pill alone will make you gain a bunch of weight.

2. Being On The Pill For A Long Time Makes It Harder To Conceive Later

Many women think that they need to get off the pill several months before they want to get pregnant, or that if they are on the pill for a really long time, it's harder for them to conceive.

Dr. Paul Bumenthal, M.D. told Parenting.com that the truth is, you can get pregnant as soon as you stop taking the pill.

In fact, many studies show that the women who want to get pregnant will get pregnant within three months to a year after stopping the pill. Fertility depends on your specific body and on factors such as your age, but there's no reason that you should take an extended period of time to adjust back to normal fertility after getting off the pill.

Before you get off the pill, make sure you have a backup form of birth control or that you are ready to conceive, because you really can get pregnant right away.

3. Your Body Needs A Break From The Pill

A lot of women believe that a break from the pill is necessary every once in a while. For some reason, it has gone around that the pill might also increase your risk of cancer.

The truth is, there's no medical reason to pause your use of the pill, according to Rewire.com, as long as you're not having any issues on it. In fact, stopping the pill could be a good way to get pregnant!

Not only that, but going on and off the pill will make your body feel like you're constantly dealing with all the side effects that happen when you start it for the first time.

Quoting a study by the Royal College of General Practitioners, who followed nearly 50,000 women over 24 years, Dr. Loanzon says that there's also no overall increased risk of cancer on the pill:

Compared to non-users, the risks were significantly lower with users for colorectal, uterine, and ovarian cancer. Endometrial cancer is also noted to decrease with birth control pills, thought to be related to suppression on the lining of the uterus. The protective effect of prolonged birth control pills can persist for at least 15 to 30 years after stopping use in cases of endometrial and ovarian cancer.

In other words, what Dr. Loanzon is saying is that being on the pill might actually decrease your risk for certain cancers — the exception is breast cancer, which so far is unclear, she says.

Either way, you really don't need a break from the pill.

4. You Have To Stop Taking The Pill Once You Turn 35

The age of 35 is often thrown around as the highest age you can be while you're taking the pill, as though everything that works about the pill and your body will end at that point.

Some women believe that you absolutely have to stop taking the pill when you reach that age, probably because the number 35 is significant, but just not as the only metric for getting off the pill.

In reality, there's no reason why you would need to stop taking the pill at 35, according to Fitness Magazine, unless you have other risk factors that would make blood clots more likely. For example, if you smoke, if you have a family history of blood clots, or if you have high blood pressure, you shouldn't be taking the birth control pill at all, but especially after that age.

The best thing to do is to continue a dialogue with your doctor about whether you're a good candidate to remain on the pill, but otherwise, there's nothing magical about the number 35 that says you have to go off the pill.

5. All Pills Are Created Equally

Many women believe that all pills are basically the same, but this isn't true.

Most of the bigger name-brand pills are combination pills — estrogen and progestin — but there is also something called the "minipill," which only has progestin, according to Dawn Stacey, Ph.D, at Verywell.com.

Additionally, you can either get the traditional type of birth control pill, which has 21 actual active pills and seven "empty pills," or you can get different packs, which have 24 main pills and four empty ones. You can even get a type of pill that has 84 active pills and just seven empty ones, which means that you don't get your period for almost three months.

Clearly, birth control pills vary a lot, and it's important to do your research and talk to your doctor about what option may be right for you.

6. You Need To Take The Pill At The Exact Same Time Every Day

This myth is one I was told when I started the pill. My doctor said I needed to take it at the same time every day, so I took the pill religiously at 6 a.m. without missing a beat.

The truth is, though, that as long as you are taking one of the combination pills — the ones with estrogen and progestin — you should be fine as long as you take it once a day, according to SELF.com.

Most women that are on birth control do end up taking the combination pill, so if that's you, you don't need to worry about setting an alarm clock down to the minute for your pill.

The exception is that if you're taking the progesterone-only pill, though, you do need to take it at the same time every day. The reason is because they work by thickening the mucus in the cervix and making it so that sperm can't really get in, according to what Nikki B. Zite, M.D., ob/gyn professor and program director at the University of Tennessee Graduate School of Medicine, told SELF. The thickening effect doesn't last long, so the mucous can start to thin within three hours if it isn't supported by another dose of progesterone.

If you're taking the progesterone-only pill, you will have to be careful about timing. Otherwise, though, you're good as long as you remember to take it consistently.

7. The Pill Is The Best And Only Birth Control Option

Many women have heard so much about the pill that they think it's the only option for birth control — and they often overestimate the effectiveness of the pill.

Dr. Loanzon says the pill is generally around 92 percent effective, but make sure you don't miss a dose.

If the pill isn't for you, though, don't worry. These days, we have multiple birth control options and Planned Parenthood does a great job of breaking them down. IUDs stay in place for years and come in hormonal or non-hormonal varieties. You also have methods like a patch or a shot.

There are several types of contraception out there, which means, with some advice and conversations with your doctor, you'll likely find the one that's right for you.

Myths about the pill abound, but the truth is, it is a great option for many women, as long as you have all the information you need to use this method correctly.