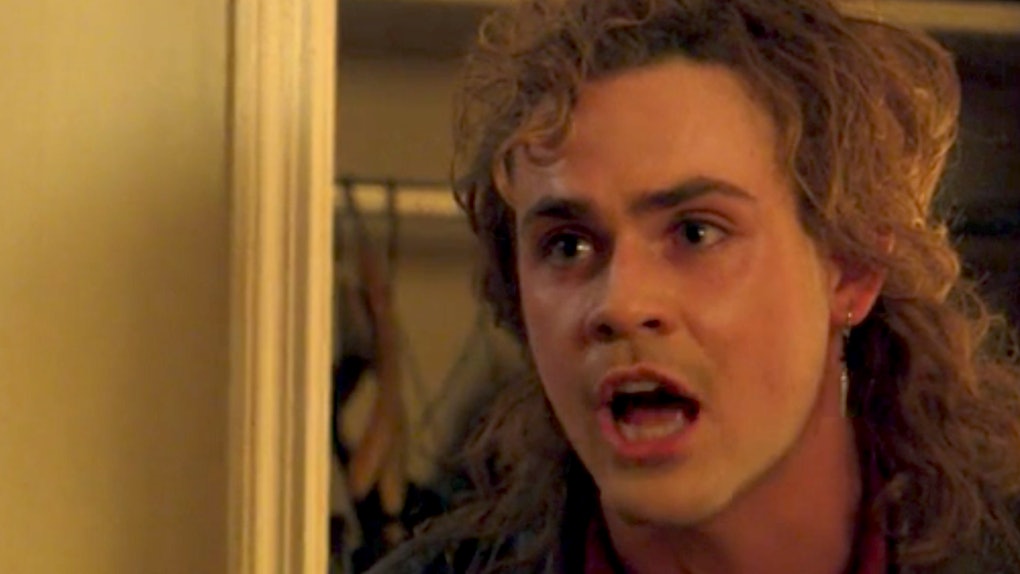 For a show with such a focus on supernatural horrors, Stranger Things is also painfully adept at portraying monsters that aren't slime beasts from another dimension. In the first season, the kids didn't only have to go up against a bloodthirsty Demogorgon, but also a power-mad scientist named Dr. Brenner. Season 2 also features a human villain just as despicable as its Upside Down monster. Spoiler alert: Don't read on until you get to Episode 8 of Stranger Things Season 2. Initially, it looks like new character Billy is going to be the nuisance, but it gets so much worse when we meet Billy's abusive dad in Episode 8 of Stranger Things Season 2.

The first episode of the new season introduces us to Billy and Max, two new kids in Hawkins who have a clearly unstable relationship with one another. It seems as though they are brother and sister, but Billy later seethes that Max isn't actually his sister. Max later reveals to Lucas that Billy is her step-brother, whom she gained after her mom recently remarried.

Throughout the series, we've seen Billy make incredibly scary threats to Max, ominously commanding her to stop hanging out with her new friends, Lucas in particular. While driving her to and from school and the arcade, he continually yells at Max, and even comes close to running over the boys with his car at one point. It's clear that Billy is abusive, and in Episode 8 we find out that the apple doesn't fall far from the tree. As it turns out, Billy learned his abusive behavior from his father.

We meet Max's mom, Susan, and Billy's father, Neil, briefly in a scene at the start of Episode 8. Billy is getting ready for a date when his dad barges into his room and demands to know where Max is. Not that Billy actually knows it, but she's been at Mike's house for a while helping the gang try to save Will from the Upside Down monster's thrall and come up with a plan to destroy it. Anyway, Neil's anger issues become immediately evident — he punches his son in the face and pins him against the wall, holding him by the throat. He commands Billy to cancel his date and go find Max, also forcing him to apologize to Susan, who sadly seems unsurprised by her husband's abusive behavior.

The scene marks the first time in the series we've seen Billy vulnerable at all, and he even bursts into tears after his dad lets go of his throat. Of course, knowing that Billy was abused by his father doesn't excuse his own abusive actions, but it does help to explain them. Social psychologists have pointed to a cycle of abuse for years, part of which puts forward the idea that children who are abused by their parents are more likely to develop abusive tendencies themselves. The scene does work to make viewers a bit more sympathetic toward Billy, but I mean, he's still a total jerk (which we see come out in full force at the start of Episode 9).

Billy and Max's home life is still left mostly unexplored in Season 2 — there was a lot of other stuff to focus on, you know? — but the scene with Billy's dad could be setting up a storyline more focused on the scary, complicated, new family in town for Season 3. It definitely seems like we're going to be seeing more of Max and Billy moving forward with the show, so learning more about their upbringing and abusive home life should be kind of a given.