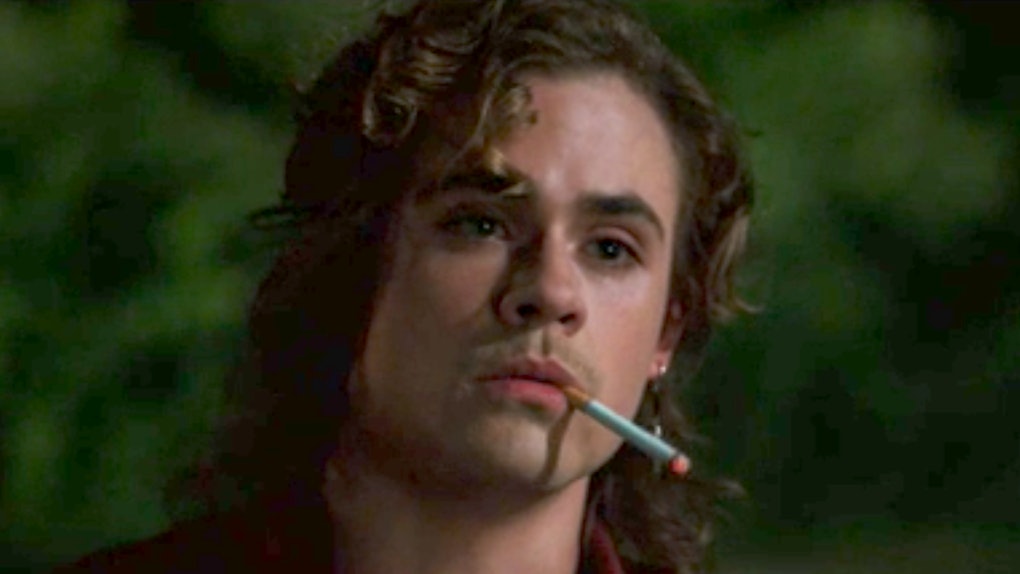 That mysterious, shadowy monster isn't the only terrifying thing to show up in Hawkins in Season 2 of Stranger Things. On the less supernatural side of things, the new villain is actually a cocky, abusive teenage boy named Billy who rolls into town with Max, his step-sister. Warning: This post contains spoilers for Stranger Things Season 2. Throughout the season, Billy's scenes are tense and dripping with an air of potential violence, and in the finale it all finally comes out. The big fight scene between Billy and Steve on Stranger Things had been built up all season, so before the crew could take down the powerful, virus-spreading Upside Down monster in the finale, Steve and the kids had to first teach Billy a lesson.

At the beginning of the ninth and final episode of the new season, Billy tracks his step-sister Max down to Mike's house, where she's been helping Mike, Lucas, Dustin, and Steve clean up the house while Joyce, Jonathan, and Nancy set off to basically exorcise Will and Hopper and Eleven attempt to close the gate to the Upside Down. But of course, Billy doesn't know about all the insane, multi-dimensional danger going on, instead he is angry to find his sister in the same house as Steve, his favorite high school bullying victim, and Lucas, the kid he ominously forbid Max from hanging out with. There really didn't seem to be a reason given for why Billy singled out Lucas so often when yelling at Max, but there definitely seemed to be hints of racism coloring that.

Billy flies into a rage when he finds Max hanging out with Lucas after he forbid their friendship, and threateningly picks him up. Luckily, Steve has evolved into the best babysitter in the world over the past few episodes, and steps in to protect Lucas by throwing a punch at Billy. Then, the fight that's been boiling up the whole season is on. At first, it looks like Steve is actually going to take it, as he lands a few punches to Billy's face and avoids the bully's jabs, but it's all over when Billy hurls a plate at Steve's head and he falls unconscious.

But it's not over yet. Max uses the opportunity to grab the chemical they've been administering to Will to keep him asleep and plunges the syringe into her big brother's neck. As he begins to go under, she picks up Steve's nail-bat and demands that Billy promise to never mess with her or her friends ever again, smashing the bat between his legs. He makes the promise before finally passing out.

Watching Steve and Max take out Billy was a hugely cathartic moment after he terrorized them both throughout the season. Billy and Max's relationship was left unclear for most of the season, but what was clear was that he was incredibly threatening and abusive towards her. Whenever he would drive her home from school or to the arcade, he would scream at her to listen to him or he would get angry. At school, Billy knocked Steve off his popularity pedestal by chugging more beer and being better at sports than the former king of Hawkins High. Steve became a more sympathetic character this season partly because Billy took up the mantle of conceited jock and loved to rub Steve's face in it.

But despite all of his terribleness, we did see a bit of the sad reason why Billy is so angry and violent (not that it excuses his behavior, of course). In the penultimate episode, we meet Billy's dad, and recognize the familiar cycle of abuse. When Billy and Max's parents (Max had earlier explained that her mom married Billy's dad after a prior divorce) come home to find Max missing and Billy getting ready for a dad, his dad grabs him by the throat and threatens him, commanding him to cancel his date and go find his step-sister. Like father, like son, I guess.