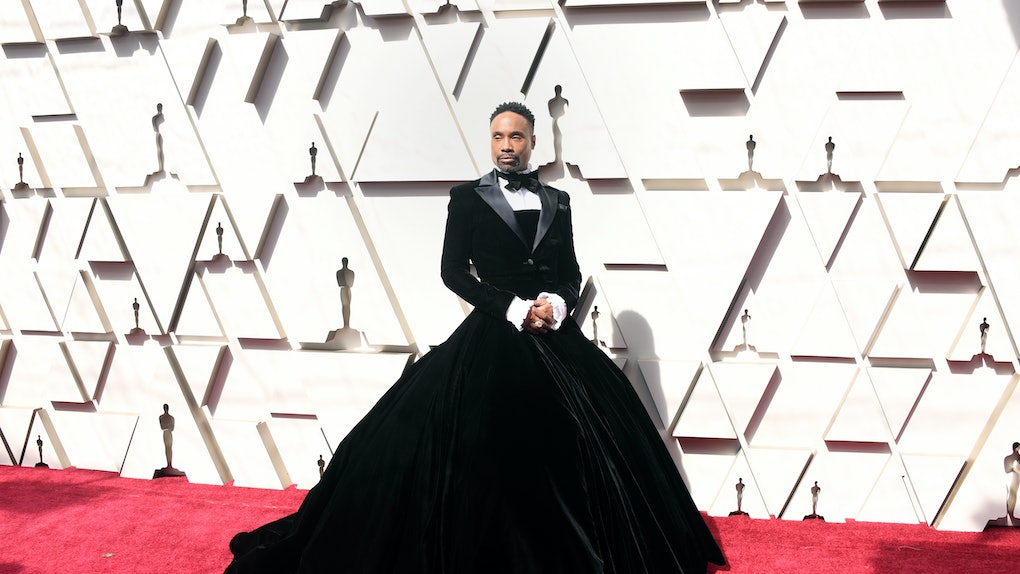 At 10 a.m., certified fashion icon Billy Porter sounds relaxed and happy as he Zooms with me from his Long Island home. He's as poised and affable as you'd expect of someone with an historic, decades-long career, but he’s also incredibly open and quick to share a laugh. Throughout our conversation, it's clear his brain never stops turning, always identifying the deeper meaning behind something. When I ask him a general question about the inspiration behind the crown he crafted as part of his collaboration with LEGO, Porter launches into a discussion about brand identities, art, and gender expectations.

"With the way the world is going, if your business doesn’t have a story, an emotional story, something creative connected to it, it’s not going to work. I’ve always thought, especially in America, it’s very difficult to get people to take you seriously when you’re an artist, because a lot of people view artistry as an extracurricular activity when, in fact, every single person on this planet engages with art every day,” Porter tells me. “Art is necessary. If we didn’t have artists, we would be walking around naked. The clothes you wear are designed by artists ... Everything we come in contact with on this planet is a piece of art."

This mindset was instilled in Porter from a young age. A sharp sense of fashion and a love of experimentation is in his blood — it always came easily to him. "I was the kid who wore a suit, a blazer, a button-up shirt, and a tie to public high school, because I just wanted to look good," Porter says. "That’s just in my DNA. I grew up in the Black church, and that’s a passion show every week ... I'm just happy that I get to play with [fashion] now on this level."

Over the past several years, Porter has ascended into a rightfully earned position as one of the most exciting figures on any red carpet, thanks in part to his fashion prowess. Fans will remember his all-gold bodysuit and wings at the 2019 Met Gala, his silvery cape at the 76th annual Golden Globes in the same year, and a double-breasted red vest with matching trousers and a pink chiffon skirt at the 2019 Tony Awards, to name a few looks. He credits his keen sartorial eye and desire to make an impact to his upbringing. "I’m first generation post-Civil Rights movement. It was ingrained in us early on that first impressions are when decisions are made; therefore, you should always look good," he says. "I know, for certain, that every time I show up somewhere with eyeballs on me, I’m a political piece of walking art. And I plan to continue [doing that], because that’s the whole point."

Many will recall Porter's iconic tuxedo gown that he wore to the 2019 Oscars as one of those indelible, defining fashion moments representative of the zeitgeist at the time. Looking back, Porter says he landed on his explosive fashion choice then because “the world was ready to receive it." "There are a lot of strides that have been made. The fact that my Black ass can show up to the Oscars in an antebellum tuxedo dress gown and not be stoned in the streets is progress,” he says. “There were a lot of detractors, haters, but there were a lot more people ... who were supportive and understanding and encouraging and inspired by it."

The TV star’s fervor goes beyond his love of fashion. In 2013, he won a Tony for playing the fabulous drag queen Lola in Kinky Boots. He previously talked about how that role was a turning point for him, for more reasons than just her style. "Lola had great passion. Our costume designer [Gregg Barnes] was brilliant. But, that part was more emotional for me," Porter opens up. "I've had a lot of trauma surrounding the father figures in my life — my biological father and my stepfather — and this play is about forgiveness ... Lola forgives his/her father’s wrongdoings. So, it was really beautiful to be able to, on Billy Porter's journey in life, at that juncture in my life, practice the act of forgiveness in real-time eight shows a week, every day."

With all the social upheaval of the COVID-19 pandemic, the 2020 George Floyd protests, and the insurrection at The Capitol on Jan. 5, many people are looking for glimpses of light in 2021. While Porter, a harbinger of light at any event, is unsure of his future red carpet plans at the moment, he does know messages of unity, justice, love, "and maybe a little bit of peace thrown in there for good measure" will always be at the center of his fashion choices. Perhaps these ideals will shine through in the possible future fashion collabs Porter hinted at, although he revealed no other details. Rest assured, his exuberance and sartorial genius aren’t going anywhere. "One gets a platform in this business,” he says. “and it’s time to use one’s powers for good, so that’s what I plan to keep doing."