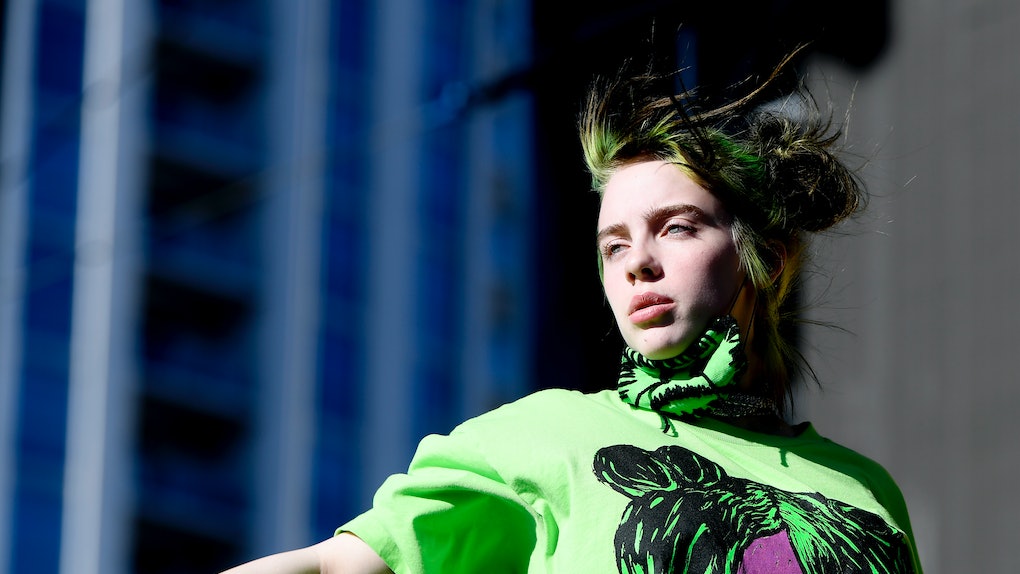 Season 45 of Saturday Night Live kicked off on Sept. 28 with Billie Eilish at its helm, and it's safe to say that the singer brought her A-game to the performance. On Saturday evening, the "All The Good Girls Go To Hell" songstress made her SNL debut a memorable one with one of the most gravity-defying performances to date. Unsurprisingly, the 17-year-old marked the occasion with a live rendition of one of her biggest chart-toppers, and you won't be able to stop watching because Billie Eilish’s SNL performance of “Bad Guy” is so next level.

If you've been following along on the 17-year-old's career trajectory, you know it's been a wild one. Eilish first broke out into the spotlight when she was just 14 years old with her song "Ocean Eyes," and quickly made history by becoming the second youngest artist to claim the number one spot on the Billboard Hot 100 since a then 16-year-old Lorde did so with "Royals" back in 2013. She ended up unseating summer bop "Old Town Road" by Lil Nas X and Billy Ray Cyrus in August with her moody track "Bad Guy," and the rest is history as she went on to create a remix of the song with her former childhood crush Justin Bieber.

Of course, Eilish's Saturday Night Live debut on Sept. 28 was a highly-anticipated kick-off to the rest of the season, and it's safe to say she hit all expectations out of the park. While performing "Bad Guy," the "When The Party's Over" hitmaker decided to play around with the visuals of the performance by adding some gravity-defying elements. The singer could be seen performing in a pint-sized set, which then began rotating to make it appear as thought Eilish was walking on the ceiling.

Eilish's memorable performance comes after she recently announced that she will be kicking off her "Where Do We Go" tour in 2020, opening with a stop in Miami's American Airlines Arena on March 9 and ending with a final performance in London on July 27.

Considering that the songstress likes to play around with the visuals in her music videos, I wouldn't be surprised if concert-goers see a different side — and perhaps, a different aesthetic — of the star once she goes on tour. Eilish recently opened up about feeling stuck about her decision to sport baggy clothing to avoid fans from sexualizing her body. The singer said that while she'd made the choice in the past, she was worried about how her fans would react if she decided to show off more of her body in the future.

"I'm gonna be a woman. I wanna show my body," Eilish previously told told Elle in September. "What if I wanna make a video where I wanna look desirable? I know it would be a huge thing. I know people will say, 'I've lost all respect for her.'"

From the looks of things, Eilish is navigating young adulthood just fine, and I have a feeling that fans can look forward to plenty of memorable performances when her global tour kicks off next March.