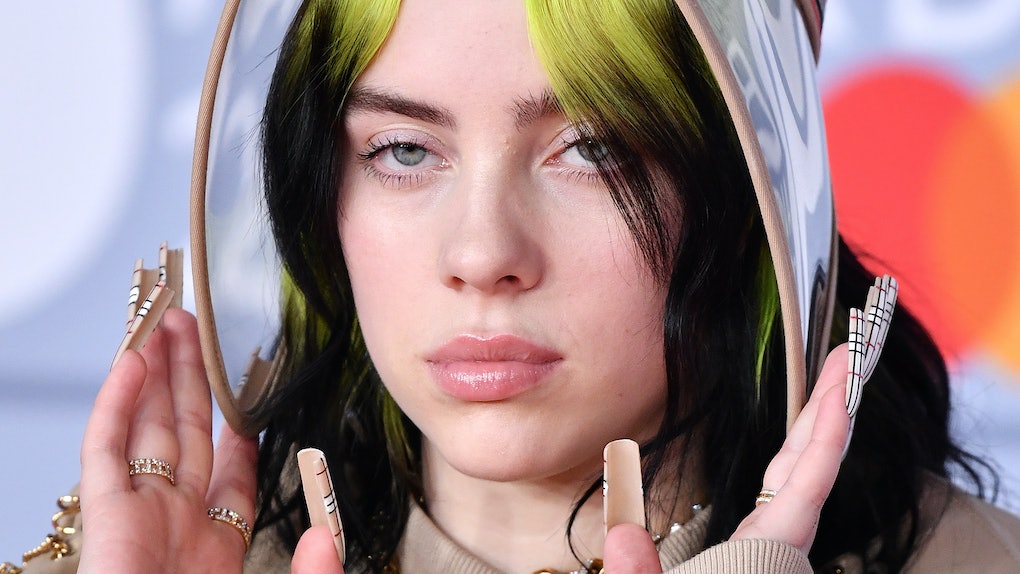 Billie Eilish fired back back at those who have negative things to say about her June 2021 British Vogue cover. The singer unveiled her photoshoot with the publication on Sunday, May 2. In the pictures, Eilish showed off her new blonde hair in vintage-inspired waves reminiscent of Marilyn Monroe's. To go along with her "old-timey pin-up" style, which was the star's idea, Eilish wore a variety of designer body suits and corsets. Her intimate look shocked fans because it was much different than the usual baggy clothing she wears, and Eilish anticipated her haters would have a lot to say about it. Billie Eilish's response to critics of her sexy British Vogue cover was everything.

One of the most shocking things about Eilish's latest photoshoot was revealing her large, black tattoo on her right upper thigh and hip. The star first mentioned her mysterious ink in a November 2020 Vogue interview, but she told fans not to expect her to show it off any time soon. "I did get a tattoo, but you won’t ever see it," Eilish said at the time.

It seems Eilish changed her mind since then because fans can finally see a glimpse of her tattoo in her newest photos. You can see the singer's tat behind her skirt below.

Fans were surprised to see her ink was so big. Although it's unclear what the image is of exactly, fans think it looks like a serpent or dragon.

As it turns out, even before her cover came out, Eilish predicted her photos would spark controversy. In her May 2 British Vogue interview, she said she expected critics to say, "'If you’re about body positivity, why would you wear a corset? Why wouldn’t you show your actual body?'"

Eilish made it clear she didn't care about criticism, however. "My thing is that I can do whatever I want," she said, adding other people should do what makes them "feel good," too. "If you want to get surgery, go get surgery. If you want to wear a dress that somebody thinks that you look too big wearing, f*ck it. If you feel like you look good, you look good."

Eilish's mindset these days reflects the title of her new album, Happier Than Ever, which will drop on July 30.