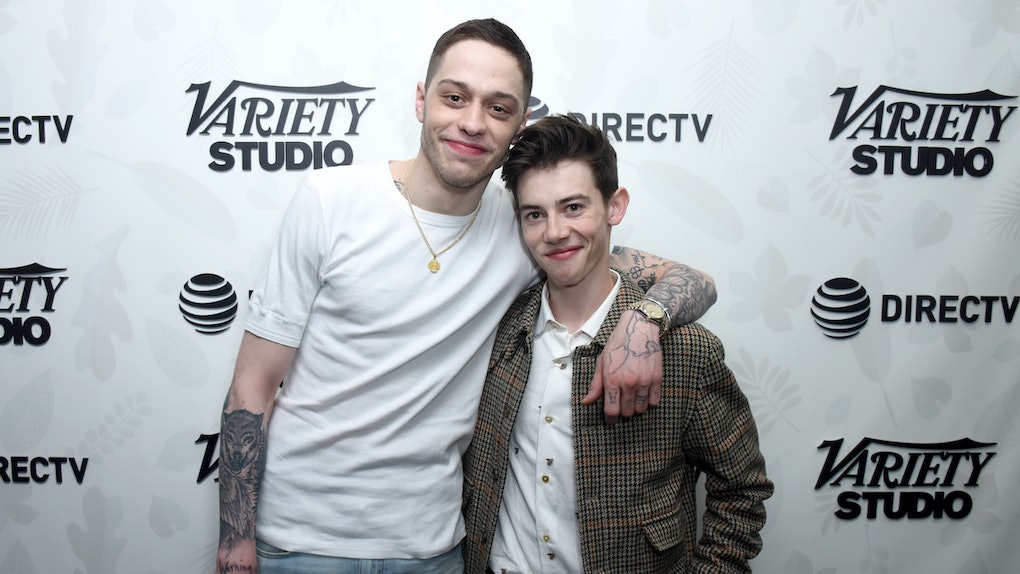 Pete Davidson's self-deprecating, directionless, stoner-boy humor is coupled with Griffin Gluck's quiet sophomore-in-your-math-class innocence in Jason Orley's Big Time Adolescence. The film stars Davidson as Zeke, a 23-year-old high school hero who's still clinging to his glory days, and Gluck as the 16-year-old Moe who idolizes him. As his protégé, Moe blindly follows Zeke's alcohol and weed-infused lead, landing him in obvious trouble. On-screen, Zeke and Moe's relationship is ultimately toxic, but, according to Gluck, he and Davidson's Big Time Adolescence relationship carried off-screen in a "fantastic" way.

Speaking with Elite Daily at the movie's Sundance Film Festival premiere, Gluck details his real-life friendship with Davidson, saying "Pete and I got along fantastically. I think from the second we met, the script starting becoming a reality. I mean, filming was crazy. We filmed in Syracuse for a month and a half, and when we weren’t filming we were just trying to kill time and kill boredom. We got into like crazy antics together and kind of the script became real."

Along with Gluck and Davidson, Machine Gun Kelly stars as one of Davidson's cronies and Thomas Barbusca (The Mick) plays a fellow high schooler alongside Gluck. Davidson and MGK's real-life friendship plays into film's narrative and, for two men who aren't known as "actors," their chemistry shines through the drug-filled haze.

Gluck goes on to detail the "crazy antics" he mentioned, specifically with a very on-brand road trip to Cleveland he, Davidson, and Barbusco took while filming. "Well, we filmed until like 5 in the morning, through the entire night, until it got bright out, and then we drove back to the hotel, showered, got ready, and then at about 6:30 am, with no sleep, we drove 8 hours to Cleveland, Ohio. We got to Machine Gun Kelly’s festival, spent the day there with him and then at night drove right back," he says.

Davidson did not take his role as a tattooed, platinum blonde big brother lightly — across both realities. In the film, Davidson shines as Zeke, although the amount of times the character says the word "sick" brings audiences out of the movie and into the comedian's real-world persona. His blasé one-liners kept fans laughing and the depth of Gluck's Moe kept fans interested.

Off-camera, the chemistry is evident, and not only felt between the actors. Big Time Adolescence writer and first-time director Jason Orley tells Elite Daily, "When you’re making an independent film, there’s really not a lot of time time to rehearse, so you usually have to hope that the chemistry is just there. I got very lucky cause Griffin and Pete had so much instant, natural chemistry that I just got to let them play and have fun and I just tried to not get in their way."

Big Time Adolescence will likely put Gluck on the map as a complex actor, growing from his notable role in Netflix's American Vandal, and shift the public perception of Davidson from gossip headlines to a bona fide actor.