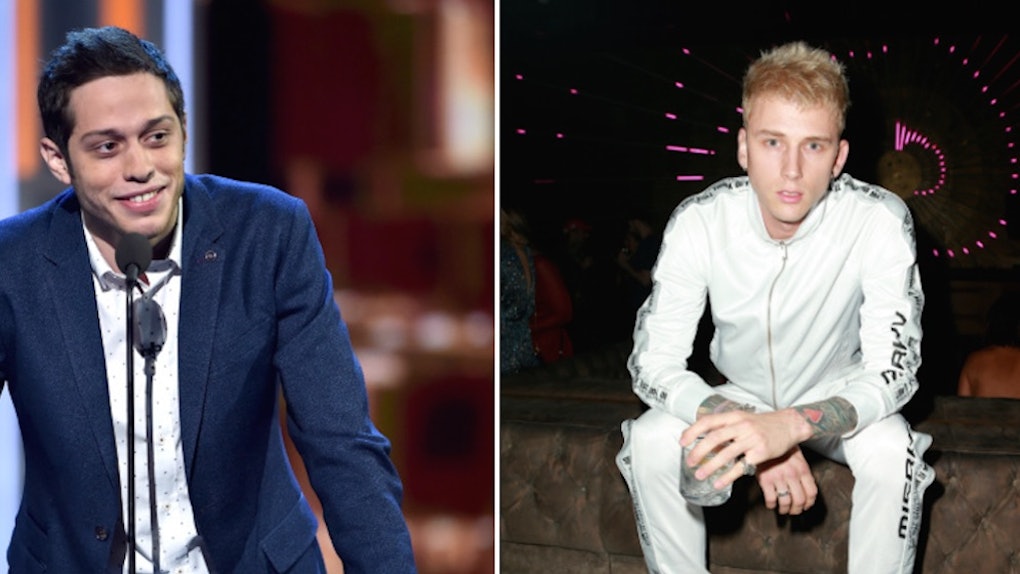 Pete Davidson is making headlines again and this time it's because he's set to star in a new exciting project alongside a world-renowned rapper. The Saturday Night Live cast member has been dominating the pop culture news cycle of late due to his whirlwind-relationship-turned-engagement to megastar Ariana Grande, but he also has a professional development to celebrate. Big Time Adolescence stars Pete Davidson and Machine Gun Kelly and the film is "a story of a teenage boy coming of age in his dull suburban town under the destructive guidance of his best friend, a charismatic college dropout," according to Deadline.

Davidson stars as said college dropout in the movie, which also features The Handmaid's Tale Sydney Sweeney, Red Band Society's Griffin Gluck, and Grown-ish's Emily Arlook. Rapper Machine Gun Kelly (real name Colson Baker) is also a member of the cast. The musician has acting cred already — he had a recurring role on Showtime's Roadies and appeared in 2016's Nerve. MGK is also slated to appear in upcoming films Bird Box, Captive State, and The Dirt.

“This is a story I’ve wanted to tell for a very long time, and I am so unbelievably grateful to the team at American High for giving me the chance to bring it to life,” Big Time Adolescence writer and director Jason Orley stated. “I also couldn’t think of a better partner than Pete Davidson to lead our incredible cast.”

The film is reportedly planning to begin filming next month.

At this point, Pete Davidson will likely return to his Saturday Night Live roots when the long-running sketch comedy comes back in the fall. SNL is known for somewhat suprising lineup shake-ups, but nothing about Season 44 has been announced yet. Pete's been a part of the SNL family since 2014 when he became one of the youngest cast members ever at the age of 20. The young comedian was cast thanks to vet Bill Hader, who noticed him on the set of Amy Schumer's Trainwreck.

"He called me a week later and said 'Hey, I recommended you to [SNL executive producer] Lorne Michaels.' And I was like, 'Why?' I was just so surprised. I didn’t even know that I couldaudition. And the fact that I got it, I just couldn’t believe it," Davidson revealed to People in 2015.

Since then, the Staten Island native's career has been on the rise — he stole the show at Comedy Central's Justin Bieber roast and recently had a memorable role in Netflix's rom-com hit, Set It Up.

Of course, Davidson's personal life has been in the blinding spotlight over the past few months. He and pop superstar Ariana Grande were initially spotted hanging out in May, sparking rumors of a romance. Since then they've gotten matching tattoos, shared tons of PDA-filled social media snaps, and even confirmed their engagement. In an interview with Jimmy Fallon on The Tonight Show June 20, Pete wasted no time in gushing about his talented fiance.

"Yeah, I feel like I won a contest," Davidson commented, adding that guys all across NYC have been tipping their hat to him since news of his engagement broke.

Grande turned the big 2-5 on June 26 and her new hubby-to-be took to Instagram to share a sweet pic with a caption sure to make your heart melt.

"happy birthday to the most precious angel on earth! you’re my favorite person that ever existed :) i love you sm," Pete wrote.

Pete fans will hopefully get a chance to see him back on SNL in a few months (more Chad, please!) as they wait for Big Time Adolescence to hit the big screen. In the meantime, there are always his Instagram gems to keep them satisfied.

More like this
Will Sharon Carter Be The Villain In 'Captain America 4'? This Theory Makes Sense
By Ani Bundel
TikTok's #NotTheMainCharacter Trend Shows The Supporting Role You Connect With Most
By Marisa Casciano
'Enola Holmes 2': Netflix Release Date, Cast, Trailer, Plot, & More
By Ani Bundel
Stay up to date