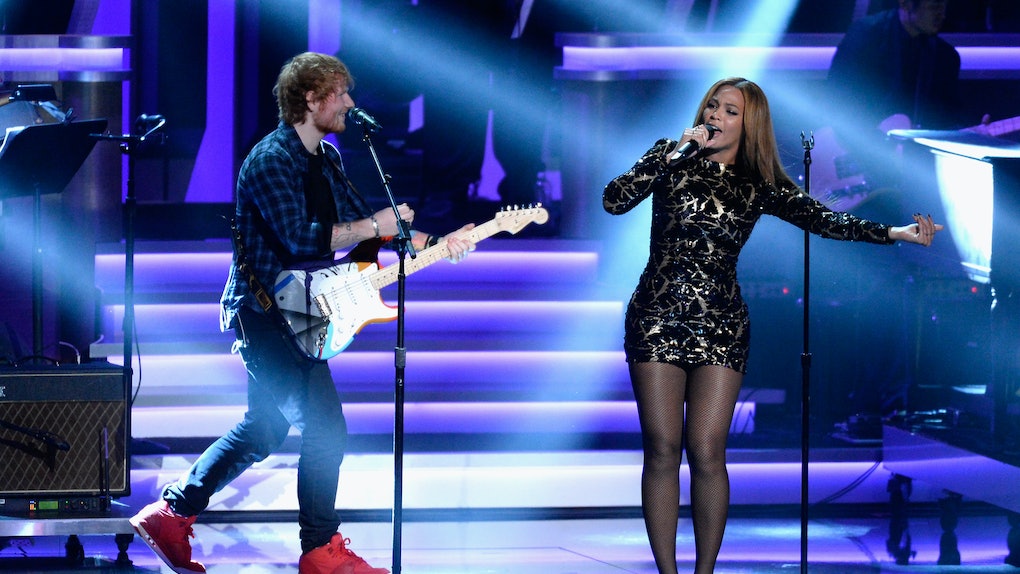 What makes everything and anything better? More Beyoncé. I know it, you know it, and apparently even Ed Sheeran knows it. The two have come together for a collaboration of the song "Perfect," and it's... perfect. The lyrics to the heartfelt song could make anyone emotional, but Beyoncé and Ed Sheeran's "Perfect" duet will literally make you sob happy tears.

The duet was released into the world at exactly 7 p.m. EST on Nov. 30. The new version of the fifth track off Sheeran's Divide album came as a pleasant surprise to fans. It's honestly the gift that keeps on giving. Beyoncé and Sheeran are such an interesting match-up, in my opinion. I definitely wasn't sure what to expect before the duet of "Perfect" was released, but it turns out it was everything I needed in my life. They're both extremely soulful, and it really brings the lyrics to life.

The lyrics to "Perfect" begin with a story about falling in love.

I found a love for me / Oh darling, just dive right in and follow my lead / Well, I found a girl, beautiful and sweet / Oh, I never knew you were the someone waiting for me / 'Cause we were just kids when we fell in love / Not knowing what it was / I will not give you up this time / But darling, just kiss me slow, your heart is all I own / And in your eyes, you're holding mine

The chorus paints a gorgeous picture of being in the arms of someone you love. The chorus to "Perfect" reads,

Baby, I'm dancing in the dark with you between my arms / Barefoot on the grass, listening to our favorite song / When you said you looked a mess, I whispered underneath my breath / But you heard it, darling, you look perfect tonight

The second verse is basically what I wish my future husband or delivery person (whoever comes first LOL obviously the second one) would say to me. In the remix, this is where Beyoncé jumps in.

Well I found a woman, stronger than anyone I know / She shares my dreams, I hope that someday I'll share her home / I found a love, to carry more than just my secrets / To carry love, to carry children of our own / We are still kids, but we're so in love / Fighting against all odds / I know we'll be alright this time / Darling, just hold my hand / Be my girl, I'll be your man / I see my future in your eyes

Honestly, this song is the most beautiful thing I've ever heard. The fact that Ed Sheeran and Beyoncé are singing the vocals makes it even more amazing.

The last time Sheeran and Beyoncé sang a powerhouse duet was all the way back in 2015 during a tribute to Stevie Wonder. To give you an idea of just how long ago that was — Ariana Grande is seen in the video with Big Sean. REMEMBER WHEN THAT WAS A THING?

Apparently, 2015 was a big year for Sheeran and Bey collaborations because they also performed an acoustic version of "Drunk In Love" at the Global Citizens Festival. The song is originally a Beyoncé and Jay-Z combo, but I think Sheeran did it justice.

I'm not sure who's idea it was for Sheeran and Beyoncé to collaborate, but they deserve every musical award in the world.

So, what have we learned tonight? I want a delivery person to serenade me and Ed Sheeran and Beyoncé make amazing collaborations. Now, I'm going to listen to this song on repeat for the rest of my life.

More like this
10 Justin Bieber's "Lifetime" Lyrics For Romantic Captions & Pics With Your Darling
By Kelly Pau
Taylor Swift's 'Fearless (Taylor's Version)' Lyric Changes Are Small, But Meaningful
By Michele Mendez
The 'Glee' Cast's Tribute To Naya Rivera At The 2021 GLAAD Media Awards Was So Moving
By Abby Monteil
Stay up to date