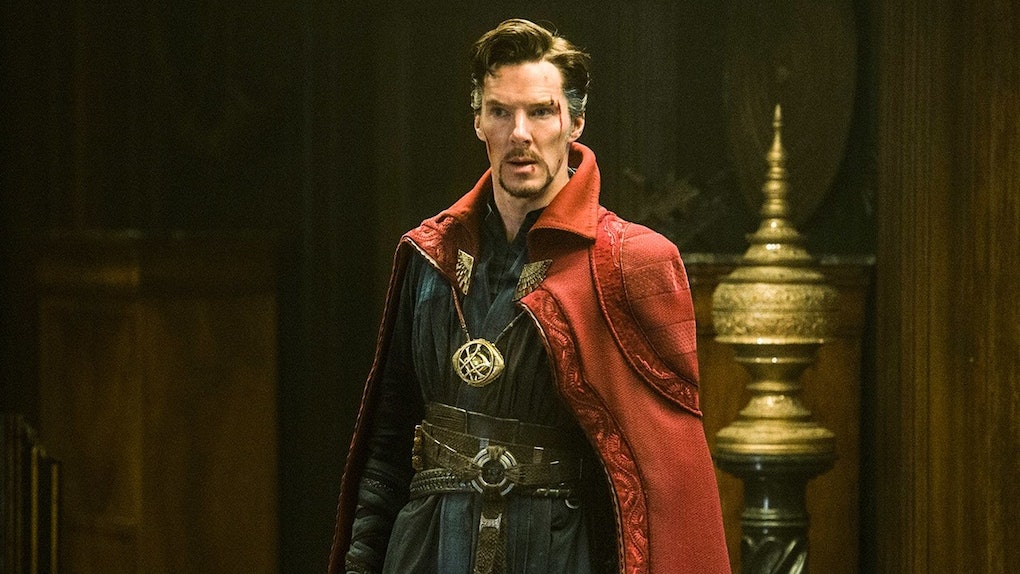 Warning: Spoilers for Avengers: Infinity War ahead. Of all the Avengers: Infinity War characters, Benedict Cumberbatch's Doctor Strange is definitely not at the top of my list right now. He definitely did the right thing to save Tony Stark, but he also helped Thanos collect all six Infinity Stones, so I'm not quite sure how to feel about him. But I do know that I want to see him have a chance to redeem himself in Avengers 4, the still-untitled Infinity War sequel. Marvel has yet to announce whether Doctor Strange will appear in the next film, but Benedict Cumberbatch's Marvel contract may be a major clue about how long he'll be sticking around the multiverse.

According to Den of Geek, Cumberbatch likely signed Marvel's standard six-movie contract. Avengers: Infinity War is his third film for the franchise (after Doctor Strange and Thor: Ragnarok), so it seems very, very likely that he'll be sticking around for Avengers 4, plus some films that take place in the post-Avengers MCU. Marvel tends to squeeze every last bit out of their high-profile actors, so it would be a major shock if Cumberbatch's Doctor Strange suddenly went missing after appearing in only three films.

Strange's fate is a little unclear at the end of Avengers: Infinity War. After Strange exchanges the Time Stone for Tony Stark's life, Thanos is easily able to travel to Wakanda and remove the Mind Stone from the revived Vision's head. Doctor Strange then evaporates into dust, telling Tony Stark, "It was the only way" — presumably indicating that he has some kind of plan up his sleeve that will be further explained in Avengers 4.

Whether Doctor Strange actually gets to be part of his plan remains to be seen, but at the very least, we can assume that he'll appear in the film in one way or another. One current theory suggests that Strange and his fellow Avengers will appear in flashbacks in Avengers 4. In late 2017, behind-the-scenes set photos surfaced of Chris Evans and Tony Stark in their former Captain America and Iron Man uniforms, so it's a fair bet to say that at least some part of Avengers 4 will take place in the distant past. Get ready for more timelines, people!

And what about Cumberbatch's Marvel commitment post-Avengers 4? Marvel has yet to announce a sequel to the 2016 hit Doctor Strange, but if it ever happens, don't expect it to be soon. Marvel Studios head Kevin Feige told Vulture in April that he's hesitant to announce future projects amid the huge success of their current ones. Said Feige:

I feel like we’re still trying to fulfill the promise of [our current slate]. That’s what Infinity War is, that’s what Captain Marvel is and Ant-Man and the Wasp, and that’s what Avengers 4 will be. That’s what we have to do first, before we start saying, 'And wait until you see this next thing!' I don’t want to talk about what I’m having for dinner when I’m about to have lunch.

Fair point, I suppose. But at the same time, don't fans deserve to continue Doctor Strange's story, especially now that he's such a huge part of Avengers: Infinity War?

Fans may be concerned that Strange's evaporation will impact his story going forward, but Feige insists that Marvel has always been about making ground-breaking decisions and taking the story from there:

Breaking eggs and then figuring out how to make an omelette from it is inherent in the entire history of our studio and the nature of the MCU. So we will break eggs, and then go from there.

I guess we're going from there, Marvel fans.