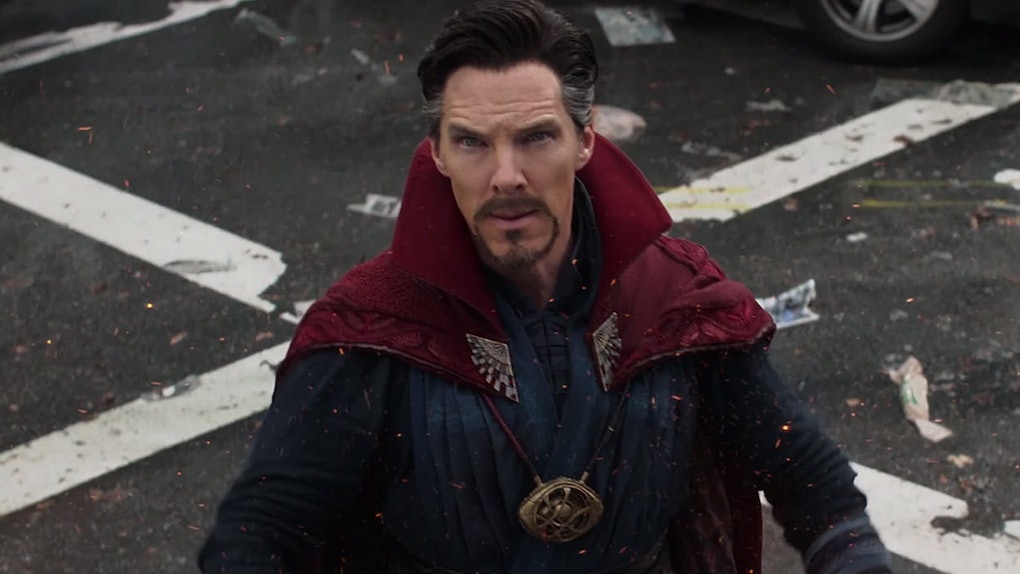 Spoiler Alert: Spoilers for Avengers: Infinity War follow. Benedict Cumberbatch sent Avengers fans into a frenzy when he confirmed during the Infinity War press tour that he was one of, if not the only cast member to read the film's entire script. Because his character Doctor Strange had the Time Stone leading into Infinity War, fans figured that he would use that power to save other superheroes in danger. However, when Strange joined the ranks of those who vanished after Thanos attained all six Infinity Stones, fans were left scrambling for answers as to why Cumberbatch had special access to the storyline. So, with Cumberbatch's claim in mind, is Doctor Strange in Avengers 4?

Particularly angry fans could blame Infinity War's bleak ending on Doctor Strange, as he offered to give Thanos the Time Stone in exchange for Tony Stark's life. Attaining the Time Stone allowed for Thanos to easily enter Wakanda and use its power to bring Vision back to life and remove the Mind Stone from his head. Either Doctor Strange had really bonded with Tony or he had a greater scheme up his sleeve, suggesting that he had an inkling of how the Avengers could save the world if Strange willingly gave Thanos his Stone.

Whether or not letting the Avengers "lose" was his plan all along, Strange will likely have to answer for his questionable actions in Avengers 4. Confirmation of Cumberbatch's involvement in Avengers 4 is shifty, but seeing as behind-the-scenes photos of the sequel set show Chris Evans in his old-school Captain America suit, it's safe to assume that time travel will be involved in Avengers 4. The promise of potential flashbacks or time jumps within the Marvel Cinematic Universe could mean that any franchise characters, including those who vanished at the end of Infinity War, could show up in the next film.

In a pre-Infinity War interview with Good Morning America, Cumberbatch offered as much explanation as he could about why he was allowed to read the entire script, saying:

I had to sort of understand what the context was. Strange has this wonderful role in it and I'm trying to kind of hold the multiverse together, so I kind of needed to know what goes on in between those brackets.

Apart from holding tight onto the Time Stone until Iron Man was in mortal danger, Strange didn't seem to do that much in Infinity War, suggesting that his true time to shine will come in Avengers 4. I've come to accept that none of the vanished characters are truly gone and that we'll still see glimpses of them in the next movie, but the likelihood of Doctor Strange reappearing definitely seems most likely.

While his GMA interview suggested that he was granted permission to read the whole script, an interview with Entertainment Weekly suggested otherwise, with Cumberbatch admitting:

I’m not supposed to have read the script. But I have...Well, it’s not Marvel’s practice to hand around the whole script of any particular one of their enterprises, especially a film as big as this, and as secret as this. I kind of had to have a bit of an overview to understand what I was doing in it. Maybe I’m just a bit more stupid than the other actors involved. I just need a little bit of special care. And they were very sweet, and chained me to something immovable whilst I read it, and unchained me after I finished reading it.

The EW reporter also commented that he wasn't sure if Cumberbatch was joking or not so, essentially, we can only fall back on the belief that Marvel secrets are ridiculously protected and impossible to crack. Cumberbatch also insisted that he didn't know of any plans for a Doctor Strange 2, but I have a feeling the character will get his moment in the spotlight in Avengers 4.

More like this
This Video Of Disneyland's Marvel's Avengers Campus Is Super
By Cianna Garrison
Why Did Addison Rae Deactivate Her Twitter? Fans Think This Is The Reason
By Brandy Robidoux
We Finally Know Who 'Becky With The Good Hair' Is In Beyoncé's Song
By Anna Menta and Brandy Robidoux
Stay up to date