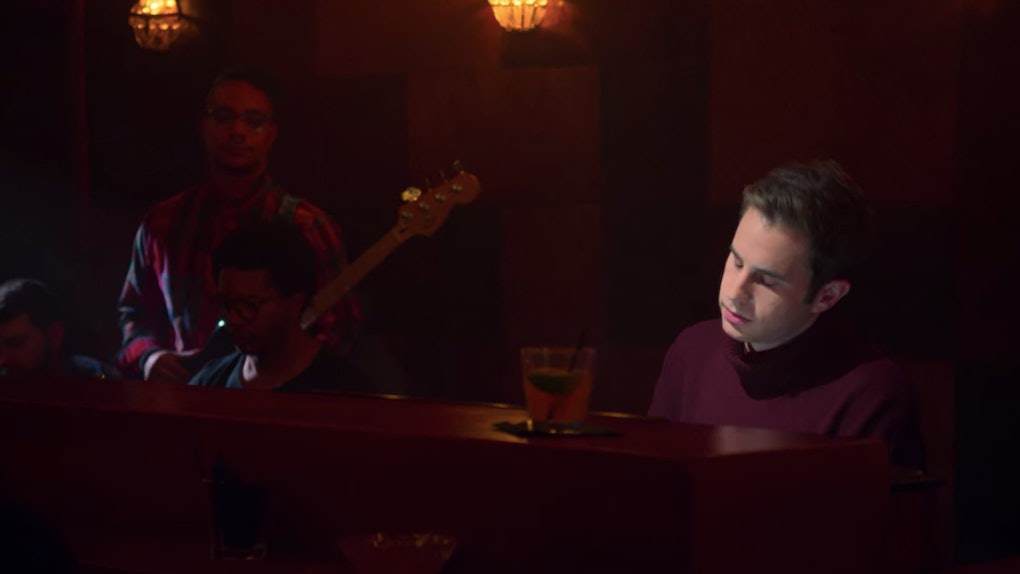 If you're like me and you watched all eight episodes of The Politician in rapid succession, then you can understand my desperate need to fill the gaping hole left in my heart by the political dramedy. While campy and at times downright outlandish in its plot points, the Netflix hit also had me way up in my feelings, thanks in large part to the incredible musical moments woven into the episodes. Particularly, Ben Platt's cover of "Vienna" in The Politician straight-up wrecked me, yet somehow made me whole again at the same time. If you've experienced it for yourself, you know what I mean.

Warning: Spoilers for The Politician Season 1 follow. The scene takes place early on in the eighth and final episode of the first season. Three years after the main events of the show, it was revealed that Payton Hobart (Platt), once an ambitious high school class president with dreams of a Harvard degree and U.S. presidency, instead was kicked out of office and was attending New York University. By then, he had given up his political ambitions, instead singing and playing piano in a dive bar.

In this particular musical session, Payton sang a cover of the Billy Joel ballad "Vienna." The song is already powerful on its own, but when you add in Payton's troubled past with Platt's otherworldly vocals and emotional delivery, it's basically the perfect storm to bring on a waterfall of tears.

While his high school friends were alarmed at Payton's change in lifestyle after high school, to be totally honest, I would not be opposed to him living out the rest of his life as a well-respected, emotionally competent musician. However, by the end of the season, Payton got back in the political game, thanks to some scheming by McAfee, Alice, and fellow St. Sebastian High School alums. Plus, The Politician has already been renewed for a second season, so it wouldn't make sense to keep Payton at the piano for too long.

Hopefully, even though Payton will be busy running a political campaign for New York state Senate against incumbent Dede Standish (Judith Light), there will be more opportunity for him to sing in Season 2. Fans were blessed with three songs sung by Platt in the first season, so there's a good chance there will be more to come in the future.

For now, fans who can't get enough of Platt's singing can also enjoy his other covers from Season 1. First, there's his rendition of Joni Mitchell's "River," which he sang at the memorial for his friend, political rival, and sometimes-lover River. Then, there's Payton's Episode 6 duet with Infinity Jackson (Zoey Deutch), "Unworthy of Your Love," from the musical Assassins.

With the colorful costumes, the laugh-out-loud satirical moments, and pretty much every line uttered by Jessica Lange, it's hard to say that any one thing is the best part of The Politician. However, Platt's musical moments are definitely up there, and if you really want to get up in your feelings, all you need to do is give his songs another listen.

The Politician Season 1 is on Netflix now.