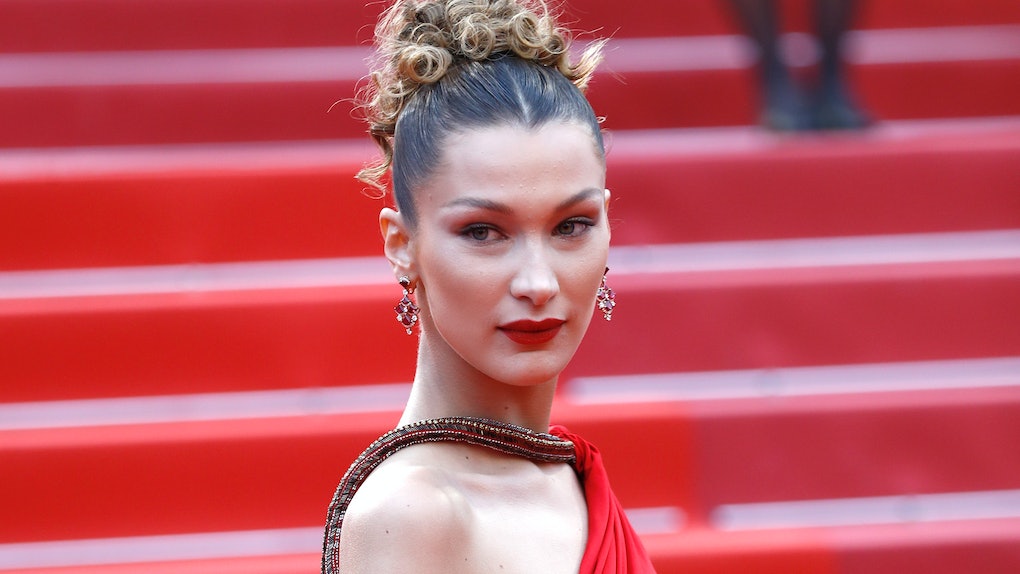 Once models find their signature looks they'll often stick with them throughout their careers as a means of personal branding. But as of late, a certain supermodel has been toying with her iconic brown locks, throwing her entire fanbase into an excited tizzy. Bella Hadid's light blonde hair, which first debuted in early August, has just gotten even blonder, and I must admit it's weird (yet welcome!) to see the beauty rocking an entirely different look. Only time will tell if Hadid will be ditching her chocolate brown hue for good, but if one thing's certain it's that she can rock literally any hue and still look like a grade A goddess.

Hadid has revealed in previous interviews that her natural hair color is actually blonde, meaning her recent color exploration is really her going back to her roots. As if to foreshadow her new change, Hadid told Glamour in a 2016 interview, "I didn’t really dye my hair to separate myself from Gigi. I started dyeing my hair when I was 14. I dyed it black and blue, I wore eyeliner — I was a punk kid. I might want to go blond eventually." Three years later and eventually has officially arrived.

Hadid showed off her extra light blonde hue in kissy face selfie on Instagram. The color, a warm golden blonde, is undeniably similar to Gigi's, while the cut, which features short layers around the face and longer layers in the back, screams bombshell. Hadid's celeb friends came out in droves to comment on the snap, with Hailey Bieber writing, "A blonde girl!!!? and Jesse Jo Stark writing, "it’s cool i’m super busy." Halsey also chimed in, commenting, "Blonde bel is my new fav," with Kim Kardashian, Anward Hadid, Kylie Jenner, and more expressing similar sentiments.

Earlier in the month, Hadid posted two other selfies rocking blonde locks, though they don't appear to be quite as bright and light as her newest hair color.

"My vibration is only love and light ✨," Hadid captioned the first photo, which shows the model holding a sprig of daisies next to her face. Love, light, and jaw-dropping gorgeousness, indeed.

The second photo, which was clearly taken moments after the first, was captioned with, "But also i ’m not angry it’s just the sun😊." The daisies also make an appearance in this snap, while the direct sunlight illuminates Hadid's green eyes and makes her look even more gorgeous than usual. (I honestly didn't even know that was possible.)

What do you think? Which of Hadid's hair colors do you prefer? It's very possible that her recent transition to blonde could just be for a campaign or editorial that she is currently shooting, so I'm not getting too used to it yet. I will say it would be fun to see her rock the honey hue for awhile longer (maybe in a snap alongside Gigi), but it's very possible her signature dark brown color could be returning any day now.