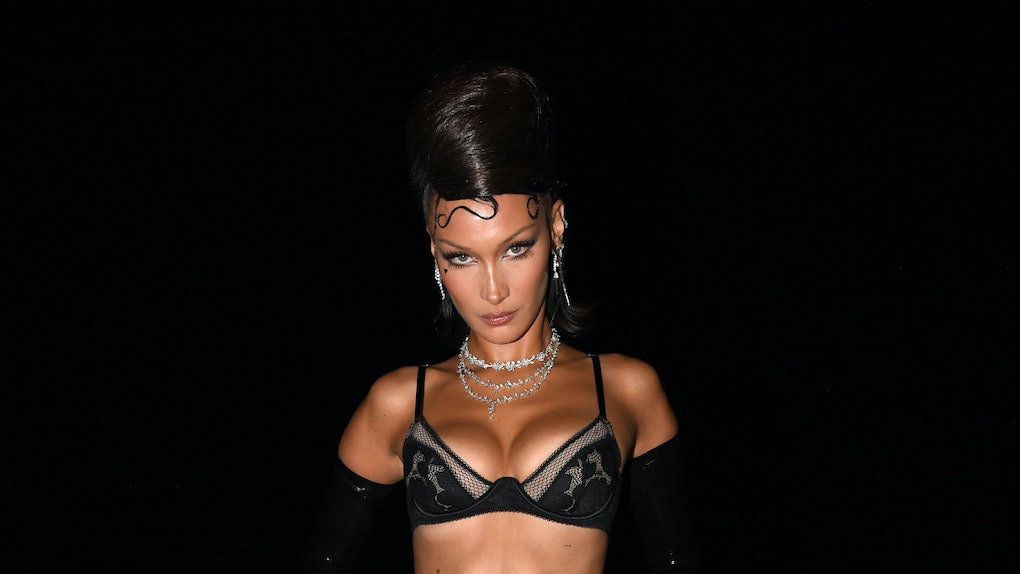 On Election Day 2020, Bella Hadid — a vocal supporter of Joe Biden's campaign for President of the United States — is taking no prisoners in her quest to help the former Vice President beat out Donald Trump. With so much at stake this year, no Trump supporter is safe from her stories this year, even if that supporter happens to be a fellow celeb. Bella Hadid called out rapper Lil Pump for supporting Trump on IG and she certainly didn't hold back.

The post on Hadid's Instagram story comes after Lil Pump spoke at the Nov. 3 rally in Grand Rapids, Michigan, for Donald Trump's campaign for reelection. Upon introducing the 20-year-old rapper from Miami, Florida, Trump mispronounced his stage name as "Little Pimp," causing quite the stir on social media. Despite all the memes and jokes about the flubbed introduction, Lil Pump's support of the Republican candidate angered many fans and fellow celebrities, including supermodel Bella Hadid.

"This is so irresponsible" and "This kid is a loser" she wrote on her Instagram story featuring a picture of Pump and a MAGA flag. "I'm going to Mars," she also wrote underneath the photo that Pump had captioned "MAGA 2020." Trump's last-ditch attempt to gain some Gen Z clout by engaging with the rapper at his final rally before Election Day is clearly not winning many over, with countless Twitter users chiming in to support Hadid's clapback on IG. "She ended him," several stan accounts wrote in response.

The Harverd Dropout rapper seems unfazed by the disapproval, however, and reposted a screenshot of his name trending on Twitter in the early morning of Election Day 2020. He also encouraged his followers to vote and "Make America Great Again" in a short video clip filmed aboard a private aircraft. He seems fairly confident in his public support of the Republican candidate, but the final results of the 2020 election aren't decided on Lil Pump's fans' votes alone — so we'll just have to wait and see.