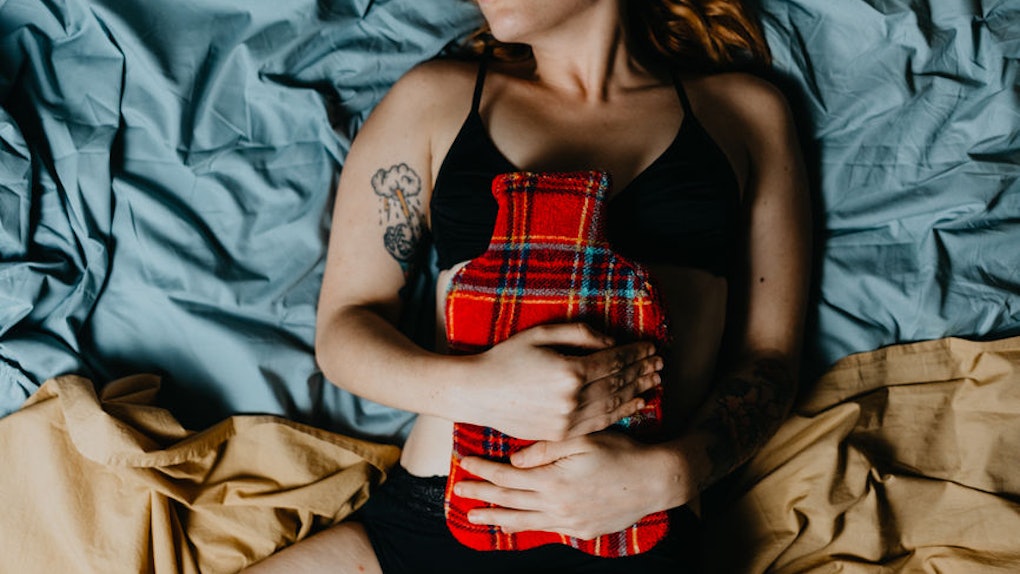 Being Prepared For Your Period Is More Complicated Than It Should Be, According To New Research

The very first time I got my period, I was decked out in head-to-toe red. It was the second week of seventh grade, and I thought I was too cool for school in that cherry-colored jumpsuit. Coming home to change, though, I noticed an even deeper red stain trickling along my panty line. Initially I was just horrified that my ~lewk~ had been compromised, but then I realized what was actually going on. I was lucky to be home with the right feminine products and people to talk to, but according to new research, being prepared for your period the first time around is hardly the norm.

I’m sure for most of you, getting your period for the first time was nothing like those super cheesy mother-daughter moments depicted in coming-of-age movies, where the girl gets her period and sits down at the edge of her bed to discuss the experience with her mother who, conveniently, has tampons and pads at the ready to celebrate her baby becoming a young woman. Rather, My Girl’s Vada Sultenfuss illustrates a more realistic reaction when she comes screaming down the stairs, practically hyperventilating as she exclaims she must be "hemorrhaging." And even if you’ve been menstruating for years and years, you still might not be prepared for your period every time Mother Nature makes her entrance — which is fine, but you have to at least be comfortable enough to ask a friend for a tampon, you feel me?

According to a recent survey, women were not only surprised by their first period, they didn't know how, or have the resources, to handle it.

OnePoll and Diva International Inc. teamed up to create a questionnaire exploring how 2,000 American women reacted to and felt during their first period. The results were a bit heartbreaking, to say the least, as it turns out one-third of those surveyed felt “confused” the first time they got their periods, the New York Post reports. What’s more, the news outlet says, one in four women admitted to feeling unprepared for the experience, while 43 percent felt "scared" by the whole thing.

To me, what’s most upsetting about these statistics is that a woman should never feel uncomfortable about or scared by her period, whether it’s the first or 50th time she's bled. Period stigma isn’t exclusive to American women, either. In honor of Menstrual Hygiene Day on May 28, 2018, Teen Vogue published an article that explored period stigma around the world, noting people in countries from China to India, England to Nepal, are not being educated properly about menstrual cycles, do not have access to the proper feminine products, and/or are limited in what they can do or where they can go during their period.

It’s troubling that women are made to feel like their menstrual cycle is a kind of taboo, when in reality, it couldn’t be a more natural, beautiful part of the female anatomy. Fortunately, however, even though the New York Post reports 48 percent of those surveyed said they had never discussed their period with anyone before their first time, while 53 percent revealed they weren’t properly educated on the subject, further research showed times are changing, and for the better.

Women are slowly but surely becoming more comfortable talking about their periods with other women, and some are even opening about it with the men in their lives, too.

I know myself, and I wasn’t super open about discussing my period with other people until I started writing about them for a living. These days, one of my favorite topics of conversation is the female body, and I love swapping period stories with my friends. That being said, I promise I'm not preachy by any means, but I am proud of what my body is capable of. Still, I know a lot of women who prefer to keep their period private, and that’s totally OK, too, but it is a comfort to know women are starting to warm up to and contribute their own two cents to such an important conversation.

Obviously a lot of disappointing statistics came from the OnePoll and Diva International questionnaire, but it did bring some good news to the forefront of period stigma: Of the women ages 55 and older who were surveyed, about 50 percent admitted to never having had any kind of conversation about their period and what to expect the first time Mother Nature showed up. But — and here's the good news — women in the 18- to 24-year-old demographic said they have had these conversations about what to expect from their first period. And if that isn’t enough reason to celebrate, one in 10 young women in the survey said they even felt comfortable talking to their dads about it. That certainly sounds like an improvement to me.

Even though there's still a long way to go before period stigma is put to rest once and for all, these statistics show conversations are being had, and women of all ages are beginning to see their cycles as less of a taboo, and more of what they really are: a beautiful part of the female body that should be celebrated, not scorned.