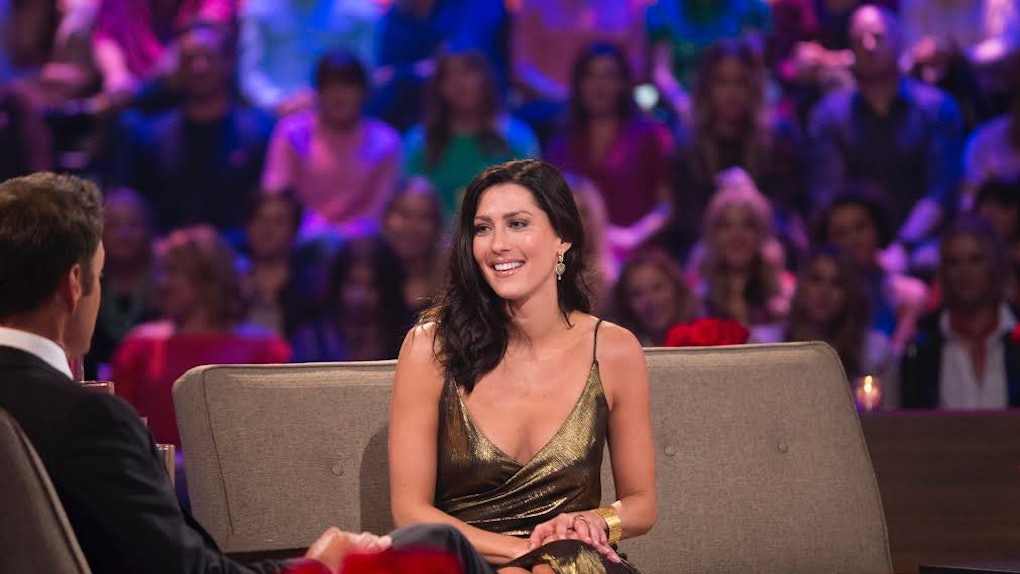 What's that saying? The best way to get over someone is to become the star of your own television show and find some hot new men to give a rose too? Yeah I think that's it. Well, your girl Becca Kufrin has got it all figured out. Becca's first Bachelorette promo is here, and she is ready to "do the damn thing."

Years from now fans of The Bachelor will be talking about where they were when Arie Luyendyk Jr. broke Becca's heart by proposing to her and then calling it off to be with runner-up Lauren Burnham. Publicly. In front of a whole damn nation. But, no worries, that's all in the past now and Becca is well on her way to forgetting all about what's his name, and this new Bachelorette promo proves it.

Entertainment Tonight dropped a brand new promo on April 29, and it's bound to get you excited for the new season. It starts off with a flashback to that infamous proposal (yuck) and then cuts right to Becca holding up a giant red heart and tearing it apart. Of course Kesha's empowerment anthem "Woman" plays in the back, because bye bye boy. How do we know Becca is truly ready? Because she ends the promo with, "Let's do the damn thing." So game on.

Not that you need reminding but, Arie proposed to Becca in Peru during The Bachelor finale, but then two months later, he broke it off to be with a contestant he sent home. Did I mention that his breakup with Becca was filmed? I can't even.

Arie went on Good Morning America on March 7, and basically said that he kept the cameras rolling in order to protect Becca. If someone can explain that logic to me, I'd greatly appreciate it. Arie said,

I really wanted everyone to know that this was on me. This was my fault, and I felt like filming that would let people know that, that if there were any questions on the breakup, that those would be squashed if they saw the breakup.

So what did you think, Arie, that if it broke off everyone would automatically assume it was Becca's fault because you're so amazing and perfect?

Worse than that? Arie then went on to tell host Michael Strahan that he filmed the ordeal because he wanted to give Becca the opportunity to become the next Bachelorette. Are you kidding me RN?

It was first announced that Becca would be the newest Bachelorette the night before Arie's appearance on Good Morning America, on March 6 during the "After The Final Rose" special.

But let's not give Arie credit for any of that. Thankfully, though, Becca will have another opportunity to find love, and this time she's in the pilot's seat. During "After The Final Rose," Becca said she's ready for it and ready to find love. She said.

At the end of the day, the show is about finding love. I have a lot of love to give. I want to be the best damn Bachelorette I can be. I’m so excited. I want to find love. I’m just so excited, I just want to do this.

Good for you, Becca. Hopefully you find someone you love who won't publicly humiliate you and break your heart. Judging by the promo, I am positive that Becca will not let anyone step all over her ever again. Now don't forget to tune in and watch her "do the damn thing."