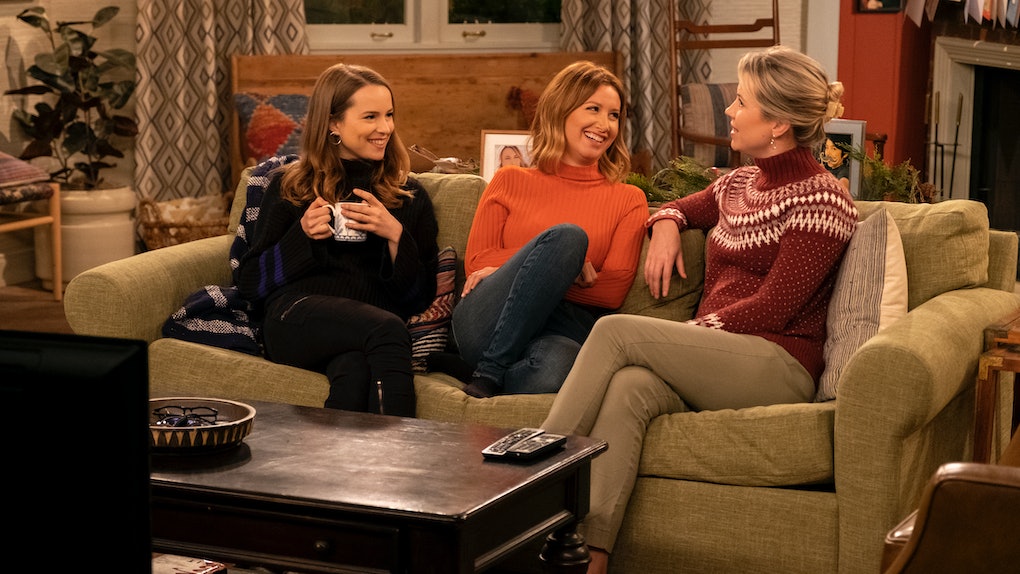 Ashley Tisdale has been waiting for a role like the one she has on Merry Happy Whatever for a long time. The Disney Channel vet became famous for portraying Sharpay in the High School Musical movies, and ever since then, she's been hoping to play a character just as meaningful to her. Now, it seems that time has finally come: Ashley Tisdale says her Merry Happy Whatever character is like Sharpay , but not in the way you might expect.

Warning: Spoilers for Season 1 of Merry Happy Whatever follow. Netflix's Merry Happy Whatever follows the Quinns, a quirky family with tons of emotional baggage, during the week of Christmas. The super-condensed storyline allows fans to quickly get to know all the Quinns, including Tisdale's character Kayla. Kayla is the middle sister of the family and, just like Sharpay, she knows how to bring the drama. But she also has vulnerable side that Tisdale was excited to explore on the show.

"She’s got a lot of layers to her," Tisdale tells Elite Daily. "You think she’s one character, but then you realize she’s got so many layers to her and you don’t even really know her until the end of the show."

In the very first episode of the show, Kayla's husband asks for a divorce, which sends her down a path of major self-discovery — it even leads to her recognizing new aspects of her sexuality. Tisdale says she can't directly relate to Kayla's specific experience in this case, but she jumped at the opportunity to create a character with such a different journey from her own,

"I respected her and I felt for her," Tisdale explains. "Even though it’s a comedy, I took it seriously. I took what she was going through seriously."

For Tisdale, being a part of such a heartfelt, emotional show like Merry Happy Whatever fulfills one of her biggest dreams.

"I’ve always dreamt of doing a comedy that had drama in it, some emotional depth in it," Tisdale says. "I got to do some fun and cool, different things for myself that I’ve never really done before."

Part of Tisdale's on-set experience was working with the rest of the cast to create a familial vibe. "The whole cast was like such a big family, so it was like we were naturally so excited to be there, all of us," Tisdale says as she describes how the cast worked to become a believable family celebrating the holidays. "It’s really rare, but we didn’t even have to try hard, to be honest."

A Season 2 of Merry Happy Whatever hasn't yet been announced, but if there is one, Tisdale is definitely on board to return. In fact, Tisdale admits she's gotten pretty attached to Kayla, which has only happened for her with one other character before.

"I just hope to play Kayla again," Tisdale says. "I don’t get like that about characters. The only other character [I felt this way about] was Sharpay. But I really love Kayla. I think she’s really awesome and I love playing her and I would just be excited to do that again."

Season 1 of Merry Happy Whatever is available on Netflix now.