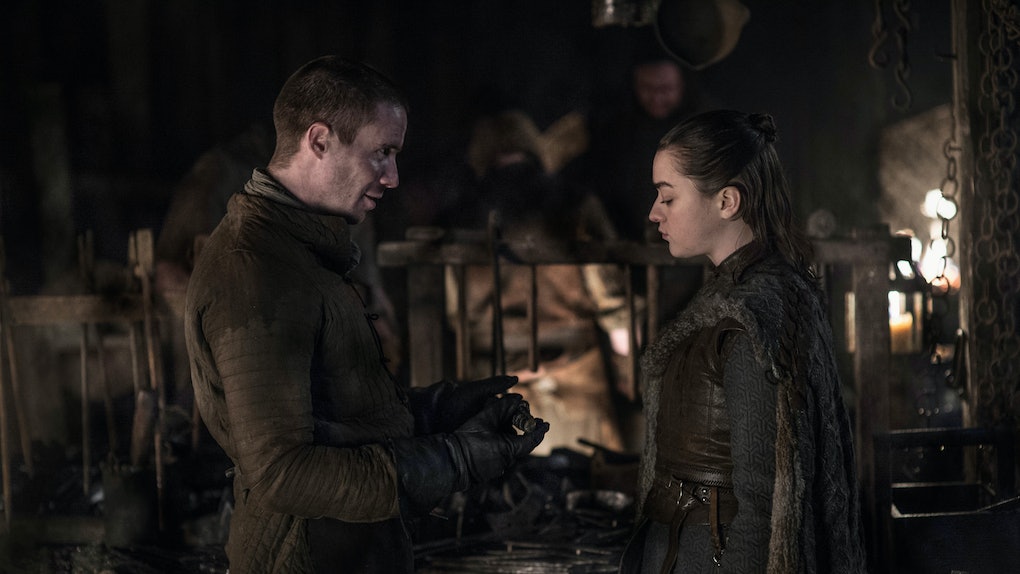 Game of Thrones Season 8 has never promised anyone a happy ending. That's partially why some of the plot points in the last few episodes have felt so shocking. But there's some joy in Winterfell! Gendry and Arya finally get together, which fans have hoped would come to pass! Not only that, but it seems like they really like each other. Even better, both survive the Battle of Winterfell, with Arya as the hero who kills the Night King. Surely there must be more good things to come. But this week's scene where Arya denied Gendry's proposal suggests happily ever after isn't going to come swiftly. Warning: Spoilers for Game of Thrones Season 8 follow.

Arya and Gendry's relationship has always been an uneasy mix of class and family. Born in Flea Bottom, Gendry was horrified when he realized "Arry" was a girl, and high born at that — he began "my lady"-ing her left and right. By the time they met again as adults, he was a little less nervous — after all, he had royal blood in him too, even if he was a bastard — but no less aware of the gulf that sat between them.

But then, a miracle occurred. Daenerys made that gulf disappear like magic. It was like something out of, well, a fantasy story, as she, in her position as Queen of the Realm, made Gendry a naturalized Baratheon, and Lord of Storm's End to boot.

For Daenerys, this was merely good politics. Giving Gendry Storm's End and recognition of his family line helped make him loyal, especially since they are only good if she wins the battle for the Iron Throne over Cersei Lannister. (And as Sansa's side-eye suggests, it's also a way to have Gendry on her side and not the side of the Starks.)

But for Gendry, this promotion was something else. His new status made it so he didn't have to sleep with Arya in a barn, in hiding, away from others. He could "do the right and proper thing" by her. (After all, that's what girls want, right?) He could be a husband worthy of Arya of House Stark, a high-born lady. As Lord of Storm End, he could offer her a hand in marriage, a castle, and a home.

In just about any other fantasy story, this is where Arya and Gendry fall into each other's arms, declare undying love, and after kicking some Lannister butt, live happily ever after.

But Game of Thrones isn't just any other fantasy story. And Arya isn't your stereotypical girl who wants a husband, a castle, and children. For heaven's sake, this is the hero of the Battle of Winterfell who just added the night King to her CV of deaths and has Cersei's name written in large, friendly letters one line down. To the surprise of no one, except maybe Gendry, Arya turned down his offer.

It was heartbreaking really. Gendry has no idea how to be a lord, and Arya wouldn't have had a problem with that. But she's not a lady, and we all know it. Sorry, Gendry.

More like this
This 2021 'Game Of Thrones' Season 8 Trailer Is So Confusing... & So Good
By Ani Bundel
'Never Have I Ever' Season 2: Release Date, Cast, Trailer, Photos, & More
By Ani Bundel
The 'This Is Us' Season 5, Episode 14 Promo Teases Another Beth Story
By Ani Bundel
Stay up to date