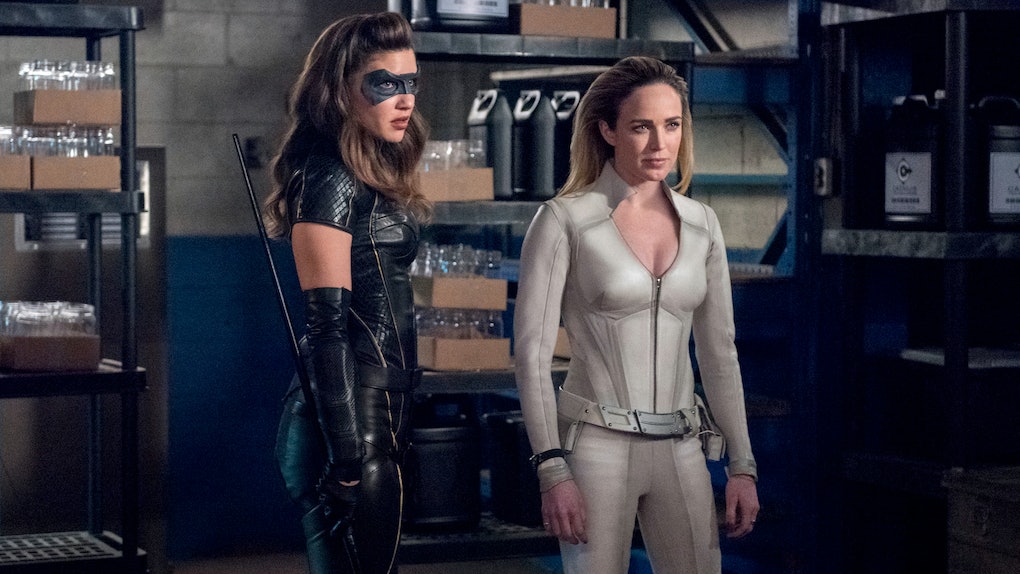 After eight seasons, Arrow is coming to an end, but fans may not have to say goodbye to all of their favorite characters just yet. The massive success of the CW superhero series has spawned an entire universe of interconnected shows, and now the network is developing an Arrow spinoff series about the Canaries, according to The Hollywood Reporter. The potential spinoff will inject an extra dose of girl power into the next phase of the CW's Arrow-verse, as it will be helmed by characters Mia Smoak (aka Blackstar), Dinah Drake (aka Black Canary), and Laurel Lance (who is now the Black Canary from Earth-2).

The backdoor pilot for this Canaries spinoff will air as a part of Arrow's eighth and final season, which is about to kick off on Oct. 15. The CW still has yet to officially order the show to series, and the network will likely gauge viewership and fan interest after the pilot airs to decide whether to make the spinoff official or not.

The potential series would center on a group of Arrow characters introduced in the series in recent seasons. First up, there's Mia Smoak (Katherine McNamara), who is the daughter of the Green Arrow himself Oliver Queen (Stephen Amell) and Felicity Smoak (Emily Bett Rickards). Her adult self was introduced through flash-forwards in Season 7, which revealed she grew up to become a cage fighter and is a vigilante named Blackstar in the year 2040. Given Mia's timeline, there is a potential for this new Canaries series to actually be set about 20 years ahead of the other Arrow-verse shows. Then again, given the abundance of time-traveling and dimension-hopping that goes on in Arrow, the series could be on any timeline, really.

The other two leads of the possible Canaries series will, of course, be the Canaries themselves. Laurel Lance (Katie Cassidy) served as the original Black Canary at the beginning of Arrow before her death at the end of Season 4, but thanks to all the parallel-universe stuff going on in the Arrow-verse, the Laurel Lance from Earth-2 has been able to travel to Earth-1 as her own world's Black Canary to continue fighting crime. However, Earth-1's actual Black Canary, who took up the mantle when that world's Laurel Lance died, is Dinah Drake (Juliana Harkavy), who actually founded the Canary Network in order to prevent what happened to Laurel to happen to anyone else.

If the Canaries series gets picked up, it will join the ever-expanding Arrow-verse, which currently consists of Arrow, The Flash, Supergirl, Legends of Tomorrow, Black Lightning, and the soon-to-premiere Batwoman. All of these shows are set in the same universe (or, more specifically, in multiple universes with very permeable borders), and they tend to cross over with one another a bunch, so fans could expect to see a lot of these characters in the future.

Nothing is official yet, though. Backdoor pilots are historically very hit-or-miss when it comes to actually getting a network to pick up a full season of a new series, so fans will just have to wait and see how the Canaries episode in Arrow Season 8 performs.

More like this
Is Netflix Making A 'To All The Boys' Spinoff Series About Kitty? Here's The Tea
By Rachel Varina
Disney+'s 'Loki' Trailer Reveals Key Info About Marvel Fans' Favorite Villain
By Ani Bundel
This TikTok Theory About Eric From 'Boy Meets World' Will Blow Your Mind
By Rachel Varina
Stay up to date