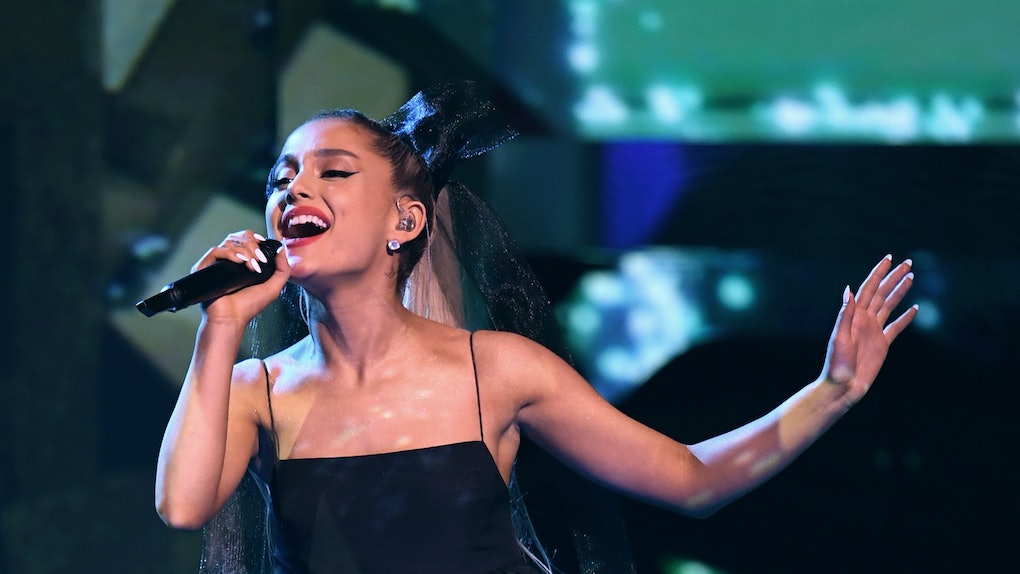 Ariana Grande's Sweetener is coming out sometime this summer, and fans are anxiously waiting for the arrival of the singer's long-anticipated follow up to Dangerous Woman. What Grande has revealed about the album so far is a few of the song titles, the personal meaning behind some of them, and, of course, she has already released "No Tears Left To Cry." Many fans, myself included, thought the name Sweetener was inspired by Grande's experiences following the terrorist attack at her concert in 2017, but Ariana Grande's new album name was revealed a year and a half ago and we all missed it.

Grande revealed in a May 1 interview with Jimmy Fallon that fans could expect an album to drop this summer. She said, "Yes, my album is coming this summer ... I worked with Pharrell, and Max, and ILYA, and Savan, and it was a really awesome experience." That's when she revealed the title, Sweetener. She said, "It's kind of about bringing light to a situation or to someone's life, or somebody else who brings light to your life, or sweetening the situation."

Given that, it's not hard to see how fans could think the inspiration for the name came from the hurt, healing, and introspection Grande went through following the terrorist attack at her concert in Manchester in 2017 that killed 22 people. But Grande confirmed via Twitter on Tuesday, May 29, that she already had the title picked out before the attack happened on May 22, 2017.

She literally posted the album title as an Instagram caption in November of 2016, and we all missed it.

She posted the above photo on Nov. 4, 2016, and captioned it "sweetener." It was right there the whole time, guys! Quite literally in front of our noses!

Grande went on a bit of a Twitter spree on May 29 responding to a boatload of questions from fans. One fan asked about the Instagram post from 2016 saying, "did you actually plan to call the album sweetener when you posted that pic on ig in 2016?" It's a fair question. Maybe that wasn't the intended album title at the time, but after time and circumstances passed, she realized that was actually an ideal album name.

But Grande responded to the tweet confirming that the Instagram was basically her announcing her album title, but ~secretly~.

She said, "yes ! i always knew . i know some people don’t understand it yet but the body of work feels like sweetener . like warm yummy agave . and clouds . w a little big of crying and sex on the side ? i gtg."

One of the songs on Sweetener is reportedly called "Get Well Soon." A fan asked the singer to elaborate on what it's about.

Grande responded, "isss ab my anxiety. i felt like i was floating for like 3 months last year & not in a nice way. like i outside my body? was v scary and i couldn’t breathe well. so it’s ab that. & lots of voices in my head singin. i hope it comforts ppl who hear it pls."

She also confirmed during this Twitter Q&A that she'll be going on tour next year!

Some other things this Twitter spree revealed: Sweetener is Grande's favorite album she's ever made, she loves every track on the album equally, and there are 15 songs total.

Grande also spent a lot of this Q&A emotionally connecting with her fans and telling them how much she loves them. One fan in particular asked for advice about getting through hard times in life. Grande responded, "be patient and trust the universe pls. everything happens for a reason and you will be okay. i promise. on everything. w every challenge comes growth. painful periods prepare you to appreciate the beautiful ones awaiting, protect you & force u to look at things differently ♡." Prepare yourselves for Sweetener, people. I have a feeling this upcoming Ariana Grande era is going to be hella uplifting.