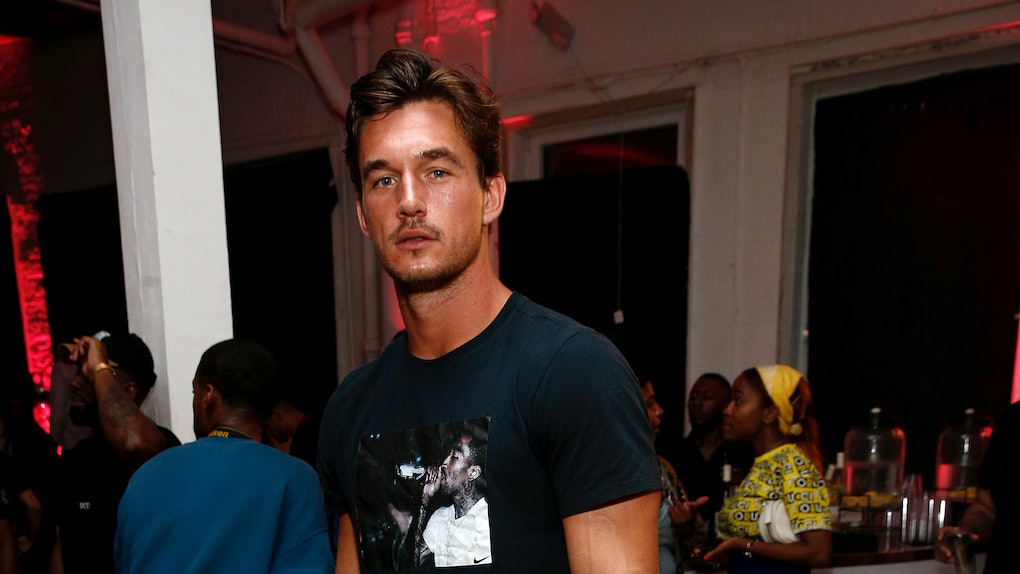 Calling all Tyler Cameron fans (aka, everyone with an appreciation for a perfectly sculpted jawline)! It seems like Tyler and Gigi Hadid's reported fling may have fizzled out, at least if something cryptic he said on Watch What Happens Live means what I think it means. When asked by fellow guest Jenny McCarthy about his relationship status, his super vague answer has me wondering: Are Tyler Cameron and Gigi Hadid still hanging out, or is the fan fave free to give his rose to someone new?

Here's how it all went down. During his appearance on WWHL on Oct. 1, McCarthy asked Tyler the question on everyone's mind: "Are you single right now?" If you've been keeping up with Tyler post-Bachelorette, you might assume he would reply with something like, "It's complicated," or, you know, just "No," considering he and Hadid have been spotted hanging out together several times and are rumored to be dating. But Tyler played it coy, simply saying "I may be single." Eeeep!

To be fair, Tyler has played it pretty cool any time the subject of his reported romance with the supermodel comes up in conversation. In an interview with Entertainment Tonight on Sept. 24, Tyler described himself and Hadid as "just friends." He added, "I mean... that's just where we're at. Our relationship doesn't need to be public. She's good people, she's an amazing person and we're just keeping it friendly." But he went on to explain that he intends to keep his private life a little more private moving forward. "I'm at the point where I don't really want to talk about my relationships. I've dated publicly, so... I'm trying to date privately and I'm not in love with anybody right now. I'm in love with myself," he said.

However, in that same interview, Tyler seemed to accidentally let it slip that Hadid was his girlfriend. The question was about why he had passed on being the next Bachelor, despite having been approached about it. Tyler explained it was in part because his father was ill at the time (he's now recovered), but he also said (and here's the interesting part), “Yeah, you shouldn’t go on the show if you have a girlfriend."

Excuse me? Luckily, Tyler went on to clarify that he wasn't saying he actually had a girlfriend. “My heart wasn’t 100% there and that’s something you have to be fully invested in. I was on the other side of it as a contestant and it was a much easier role,” Tyler explained to Enertainment Tonight. Hmm, the plot thickens.

However, that interview wasn't the only time he dropped a “just friends” bomb in regards to Hadid. In an interview with E! News on Sept. 27, Tyler described his connection to her as platonic. "That's my friend," he explained. "We hung out a few times. She's doing her thing now in Paris and killin' it so..." So? So, what? Finish that thought, sir.

That brings us back to the present, where things remain frustratingly unclear. Are the rumors they're dating true, and Tyler's just playing it really cool for the press? Does saying he might be single now mean they were dating and it's over? Only time will tell, but if I were betting on the situation, I'd guess we haven't seen the last of this ridiculously gorgeous maybe-duo.