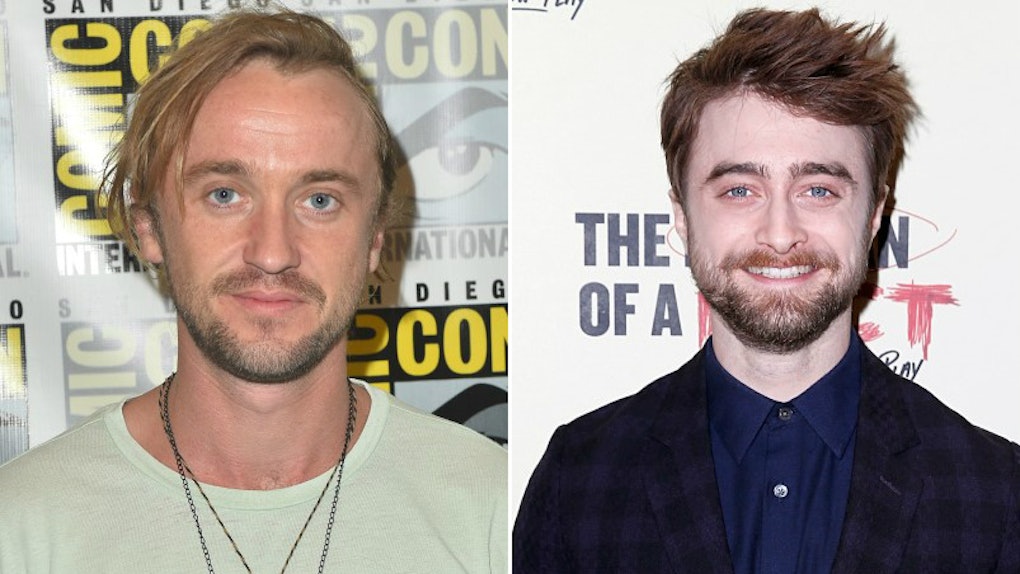 It’s been over seven years since the world last saw Daniel Radcliffe as Harry Potter, but that hasn’t stopped Radcliffe from thinking about a potential reunion with his Harry Potter co-stars. While it’s well-known that Radcliffe and his co-stars Emma Watson and Rupert Grint still hang out every now and again, lots of fans have wondered whether he’s still friendly with other former castmates. For example, are Tom Felton and Daniel Radcliffe still friends? The answer to that is pretty simple!

“We do want to work together on some things or another,” Felton told Us Weekly in a recent interview. “Daniel and I talk about one day I’ll get to be the good guy and he gets to play the villain. So yeah, you never know. They’ll bring us all back for a proper reunion one day.”

Felton is obviously referencing the good versus evil dynamic the two had in the Harry Potter franchise. Felton played villain Draco Malfoy, while Radcliffe was obviously the protagonist of the films. It’s nice to see that they still have enough love and respect for each other to want to work together again. And it doesn’t seem like they’re shunning their Harry Potter histories at all, which can happen with child stars. So, that’s good news!

In fact, Felton shared his respect for Radcliffe back in October 2018 when Radcliffe was appearing on Broadway in The Lifespan of A Fact. He shared a photo of himself with Radcliffe on Instagram and urged fans to go see the play.

As far as Harry Potter reunions go, Felton is also frequently seen with Emma Watson who, of course, played Hermione Granger in the franchise. Back in November 2018, the 31-year-old star told Us Weekly that he and Watson spend quite a lot of time together.

His comments were seemingly in reference to a photo Watson shared on Instagram at the time that showed her and Felton having fun on a beach. You can check out her post down below:

On top of all that, Felton seems pretty proud of his run in the Harry Potter films. He even posed below a billboard for Harry Potter on Broadway and posted the photo to his Instagram page. Have a look:

It looks to me like Felton and the rest of the Harry Potter crew are definitely still friendly and possibly down for a reunion in the future. Now, if only they could get Rupert Grint, Ralph Fiennes, Helena Bonham Carter, and everyone else on board, that would truly be epic. I’d love to see them all play new takes on their characters as Felton suggested. That would definitely be an interesting twist on characters everyone knows and loves!

More like this
Who Will Play The Fantastic Four For Marvel? Twitter Has So Many Ideas
By Dylan Kickham
Will Sandra Oh Return To 'Grey's Anatomy'? Here's What She Said
By Dylan Kickham
Juliette Porter Teases 'Siesta Key' Season 4 Drama — EXCLUSIVE
By Rachel Varina
Stay up to date