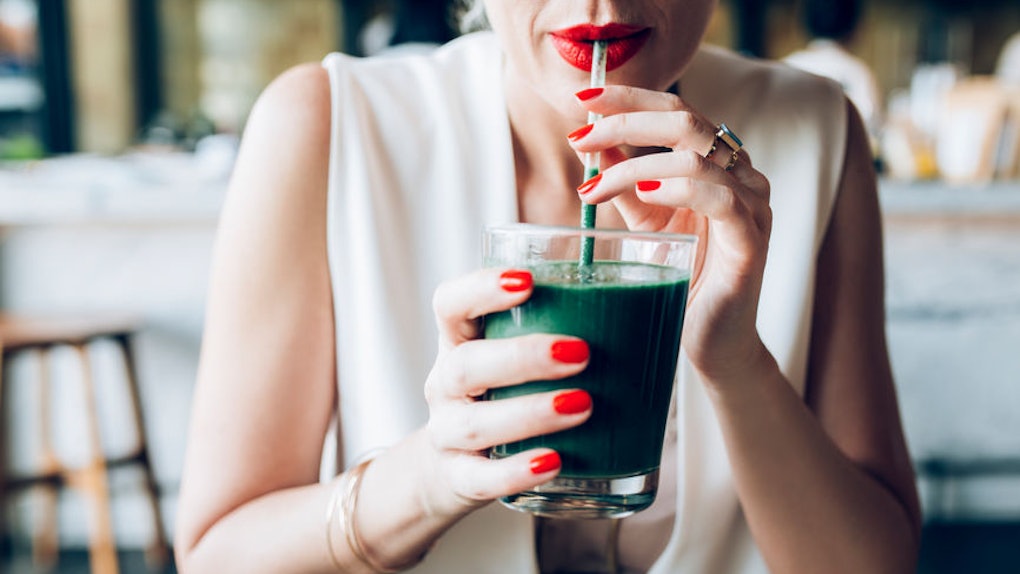 Are Plastic Straws Bad For You? Here's Why Experts Want You To Steer Clear

How many times have you heard that sing-song phrase “reduce, reuse, recycle” and associated the jingle with doing good by the environment? You probably have a recycling can in your kitchen right now, and every time you finish a plastic water bottle, you toss it in thinking you’ve done good. Recycling plastic is absolutely a step in the right direction, but I’m sure you’ve noticed a lot of people are making conscious efforts to limit or stop using plastic altogether. It may seem a little excessive initially, but things like plastic straws are bad for you — just as, if not more than, they are for the environment. So even if it feels a little ~extra~ to pass on plastic produce bags for canvas totes, or bring your own reusable straw to cafes and bars, these sorts of efforts could be essential for your health, and there’s nothing extra about that.

I recognize it’s very naive to think, if plastic is bad for you, big companies and restaurants would be forgoing things like straws to look out for their customers, but unfortunately, that's just not the world we live in. So although scientists, and even wellness influencers, have been warning against plastic for years, it took a powerhouse like Starbucks to announce all of its stores will no longer offer plastic straws to customers by the year 2020, for people to really start listening.

The news probably has you wondering how bad plastic is for your health, especially if it's so bad for the environment that a huge company like Starbucks is trying to wean you off the stuff.

According to its official announcement, the reason behind Starbucks’ decision to eliminate plastic straws from its stores is 100 percent environmentally friendly, with the company's goal being to help reduce the amount of plastic in the ocean. “Starbucks is finally drawing a line in the sand and creating a mold for other large brands to follow,” Chris Milne, director of packaging sourcing for Starbucks, stated, explaining that now, instead of straws, the company will be using recyclable lids.

So by now, you’re probably thinking: What’s the difference between lids and straws? You throw all forms of plastic into the recycling bin anyway, right? Well, not exactly. See, here’s what’s problematic about plastic: It’s actually not recyclable at all. It doesn’t matter what form it takes. Whether it's a straw, cup, or bag, according to the Plastic Pollution Coalition, plastic isn’t biodegradable. Instead, it’s literally a material made to last forever, so it just “breaks down into smaller and smaller pieces,” the organization explained — which wouldn’t be so horrible, if not for the fact that plastic is also a toxic substance.

If you think about it, it makes sense: Why would your body be immune to something that’s such a huge threat to the environment?

Back in 2011, NPR reported the results of a study that examined upwards of 450 plastic items that typically come into contact with food, such as baby bottles, plastic deli packaging, and grocery bags. The results of that research showed that products with plastic in them, even those claiming to be BPA-free, release chemicals in the body that act like estrogen hormones. Basically, anything made from or with plastic can release harmful chemicals, like BPA, into the beverages you drink, the foods you eat, and the products you use daily — think skincare, serums, creams, etc. — and this can cause a number of long-term health issues, according to NPR, such as cancer, heart disease, and diabetes.

Anders Jacobson, president of the global water purification brand Bluewater, says the greatest impact plastic has on the human body has to do with your cells, and the effects are nothing good: “Plastic contains many chemical additives that have negative human health effects like carcinogens, and diethylhexyl phthalate (DEHP),” he tells Elite Daily, adding that, because of these chemicals, drinking from and/or using plastic in general can "impair immune function, increase chances for cancer, early onset of puberty, obesity, diabetes, and hyperactivity, among other problems to be confirmed.”

And if the idea of plastic contaminating your food and drinks wasn't enough, the sneaky substance can also leak out into your cosmetic products, too. In an interview with Elite Daily, Debbi Burnes, natural skincare expert and founder of Sumbody Skincare, points out that while you and I might be familiar with how harmful BPA in water bottles can be, most of us probably don't even realize BPA is an issue in the beauty industry, too.

"BPA plastic is in your beauty product containers," Burnes tells Elite Daily. "Just like with water, the BPAs leach into your products and then you apply those to your skin." What's more, Burnes explains that, because your skin is your largest organ, you actually absorb more through your skin than you do through ingestion when you eat or drink something. Therefore, your beauty products can actually put you at risk for even more harmful effects than the BPAs in plastic water bottles. What a mess, right?

This isn't all to scare you, BTW, but it is important to make yourself aware of the facts. I'm not telling you to give up plastic altogether, because I totally understand that, sometimes, it really is hard to avoid in places like takeout restaurants, and apparently even in beauty products. Still, the least you can do is reduce your plastic use by going that extra mile to buy stainless steel reusable straws and cups, bringing your own reusable produce bags to grocery stores, and package your food in glass containers.

I know plastic can be convenient, but it's clearly not healthy for your body, so make the necessary swaps wherever you can, if not for the environment, for your health.