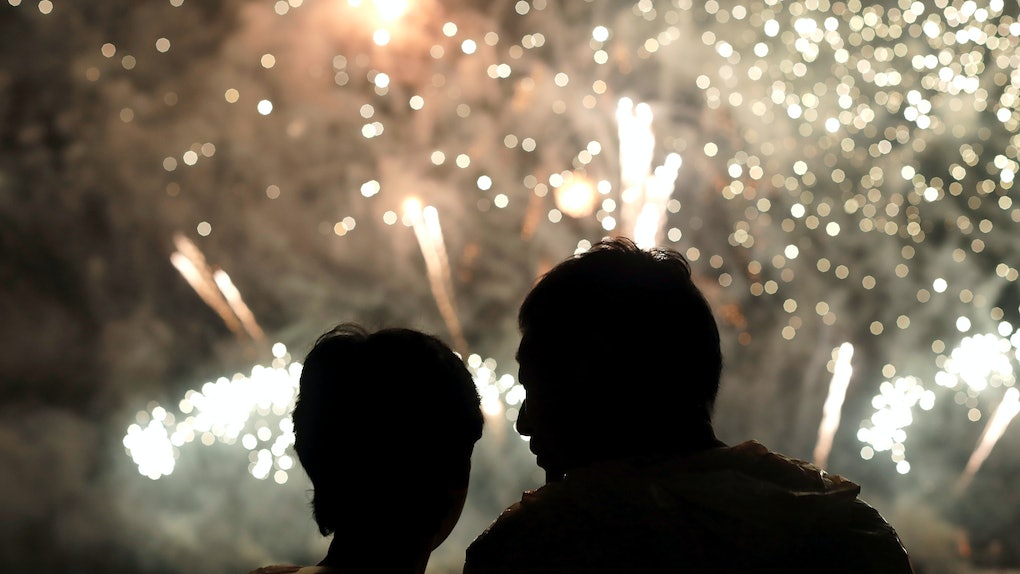 Are Fireworks Legal? Here's What You Should Know Before Setting Them Off On New Year's Eve

Aside from the Independence Day, New Year's Eve is one of the most popular times of year to set off fireworks. Between everyone getting cozy and that highly-anticipated New Year's Eve kiss, fireworks are a romantic and exciting way to kick off the new year. But, as you're probably aware, different U.S. states have varying rules and regulations for buying and setting off fireworks. So, before making any explosive decisions for your NYE, find out if fireworks are legal where you'll be celebrating. For all of you firework fiends out there, here's what you should know before setting them off this holiday season.

First, it's essential to figure out what types of fireworks you're planning on using at your big celebration. Handheld sparklers fun, easy-to-use, and are allowed in most states, according to USA Today. However, other fireworks that shoot into the sky are banned and are considered potentially dangerous. Varying types of fireworks are allowed in different states, however, so it's very important to do some research beforehand.

While U.S. Federal law allows many states to sell, distribute, and use consumer fireworks, each state law is actually completely different. So make sure to specifically research your state's fireworks rules before buying anything.

The states that win the award for the absolute strictest fireworks laws include Delaware and Massachusetts. Both states prohibit consumers from buying or using any types of fireworks, even including sparklers and poppers. So don't even think about sneaking that sweet pack of aerial rockets or those innocent packs of poppers into either of these states without a license or permit, because they are totally and utterly illegal.

For consumer use, ground-based sparklers, hand held sparkling devices, party poppers, and snappers are otherwise widely accepted. New York and Connecticut allows the use and distribution of these relatively low-key firework variations. However, displaying aerial consumer fireworks — as well as firecrackers, chasers, and skyrockets — is not allowed in such states, but is permitted elsewhere.

Some states, such as as Pennsylvania and Ohio, permit buying large fireworks, but don't allow consumer usage. States like these usually require fireworks to leave state lines within 48 hours of being purchased. So, if you're a resident in states with lenient buying and strict usage laws, just make sure you set them off wherever you do decide to set them off.

If you're looking to buy and use larger fireworks, Missouri has quite relaxed rules. Yahoo Lifestyle actually considers Missouri to be one of few ideal states to travel to for purchasing fireworks, because they sell a wide variety and they allow people to set them off in-state. Using a large portion of what they sell elsewhere, however, might be illegal.

So again, just double-check what your local rules are. Other prime states for buying and using fireworks include South Carolina, Indiana and Texas. But, if you're in Texas, keep in mind that buying and setting off fireworks is absolutely illegal 100 miles from the border of Mexico. Also remember that many of these states have different size regulations for each permitted type of firework, which is definitely another factor to consider during your big fireworks purchase this holiday season.

After purchasing your permitted firework of choice, just keep in mind that while fireworks are a ton of fun, they are explosives and can actually harm you. Don't forget to take a look at The National Council on Fireworks Safety for tips on how to use them safely and efficiently, because it is possible to sustain lifelong injuries from carelessness, or faulty fireworks. So be safe and sensible, and have a totally explosive New Years Eve.

More like this
What Is Boo Bash At Disney World? The Halloween Event Has Rides, Music, & Themed Treats
By Cianna Garrison
Here's How To Go Live On TikTok To Switch Up Your Videos
By Daffany Chan
What Does Pepsi Blue Taste Like? It Has Familiar Fruity Flavors
By Cianna Garrison
Stay up to date