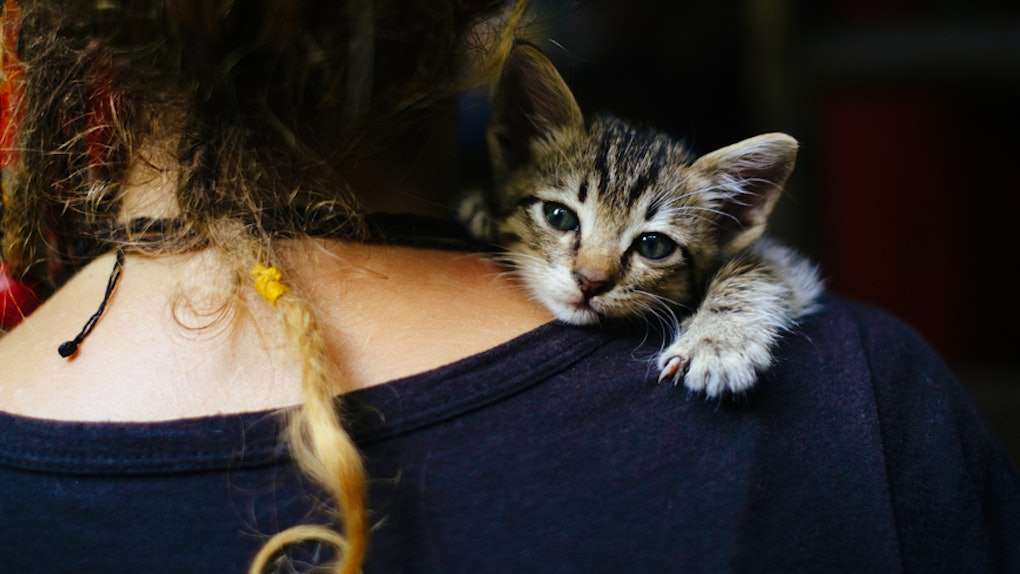 Are Essential Oils Safe For Pets? Some Oils May Be Poisonous For Your Furry Friends

Essential oils have been used as a holistic treatment for thousands of years, and they're having a particularly vibrant cultural moment right now. Whether you want better sleep or improved focus, it seems there’s an oil for anything. But as positive a practice as aromatherapy can be, if you have a little fur baby at home with you, you may be wondering if essential oils are safe for pets. Before you go ahead and diffuse that nice lavender and clary sage blend next to your cat's litter box, there's something you should know.

The possibility of the dangers of essential oils in relation to our furry friends is a debate that's now raging online after a controversial Facebook post went up earlier this week. The social media post — which has since been taken down — was written by a mother named Sue Murray, who claimed she inadvertently poisoned her daughter's 16-year-old cat Ernie after using some eucalyptus oil in a diffuser she purchased on Amazon. She was using the oil as a potential decongestant, as she was struggling with a head cold at the time, and eucalyptus is often used as a holistic remedy for such colds.

According to BuzzFeed, Murray noticed that, after four days of using the essential oil diffuser, Ernie was acting lethargic, unstable, and was even drooling.

Murray began to suspect that the eucalyptus oil had something to do with his symptoms. Sure enough, when Murray's husband did some online research, he learned that eucalyptus oil could indeed be toxic to their feline friend. Murray was surprised to find this out, as there was no warning about such a hazard on the products she used, and she previously had no knowledge that pets could be in danger as a result of diffusing the oils in her home.

Murray's Facebook post has since been removed, but BuzzFeed News reports that when it was still online, it was shared more than 700,000 times and caused a pretty massive uproar across the social network.

The vet gave him a shot of antibiotics and another shot of vitamins to boost him and instructions to watch him over the weekend.

Ernie hasn't been himself. He is eating and drinking a little, walking a little better, has some diarrhea, but is still not out of the woods.

And indeed, the symptoms Murray described are all signs of cat poisoning. Symptoms of poisoning include, but aren't limited to, drooling, lethargy, depression, loss of appetite, and hyperactivity.

Part of the reason why cats are so sensitive to these oils has to do with their acute sense of smell, and the fact that their skin is super thin (literally speaking, that is). Both of these factors make it easier for the oils to be absorbed into the animal's bloodstream, so basically, the product is much more potent to them than it is to humans.

And apparently, eucalyptus oil is not the only essential oil that can be toxic to cats.

Others include popular oils like lavender, peppermint, and tea tree, to name a few. As Michael San Filippo, a spokesman for the American Veterinary Medical Association told BuzzFeed,

It appears that these products are potentially toxic to pets (cats in particular) and we'd advise pet owners to be cautious in using them around the house.

So, why is the potential danger to your pets not listed as a warning on most essential oils?

I know this isn't a satisfying answer, but basically, it's unclear. Perhaps it's because these things rarely happen, or at least, we rarely hear of such stories, but overall, we don't really know why these potential dangers aren't discussed more often.

In response to a request for comment on this story, a representative from dōTERRA, a wellness marketing company and major seller of essential oils, tells Elite Daily that using these oils on or around animals may have a variety of effects and reactions. They "recommend consulting a veterinarian for additional information on essential oils and pets when incorporating essential oils into animal care."

I suppose the lesson here is to paws (see what I did there?) and do your research before bringing anything into your home, especially if you have fuzzy little pals sharing your space with you. And, of course, checking in with your vet certainly can't hurt.