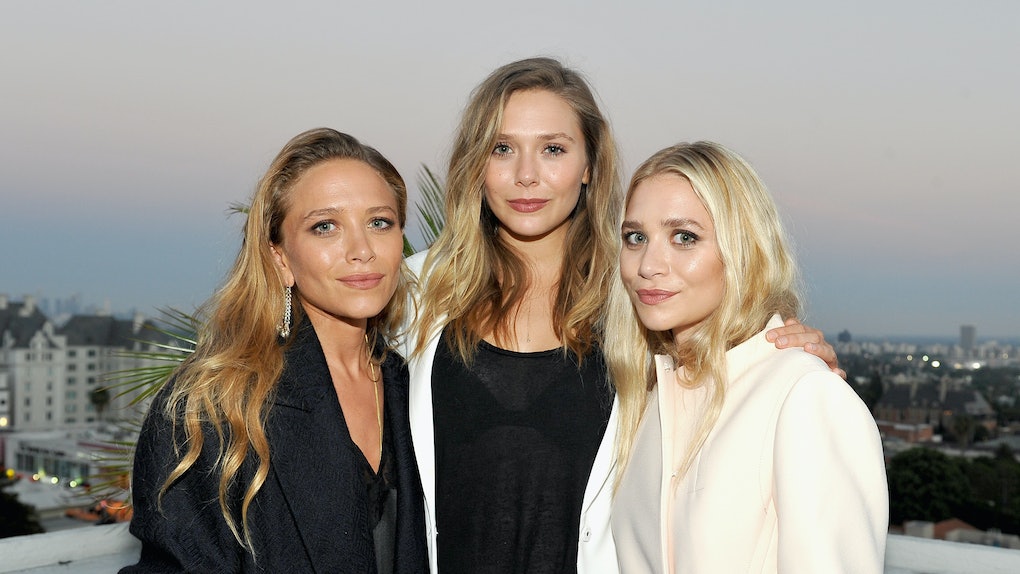 One of the most recognizable sibling crews in pop culture also happens to be one of the most mysterious ones, too. The Olsen sisters all have their own extremely successful careers in Hollywood. While Elizabeth Olsen made a name for herself portraying Wanda Maximoff, the Scarlet Witch, in the Marvel Cinematic Universe, twins Mary-Kate and Ashley Olsen starred in the iconic '90s sitcom Full House and now run their own high fashion label, The Row. The trio are often spotted separately, though, with the twins socializing in luxury fashion circles, and Elizabeth hanging out alongside movie stars and big-time directors. The notoriously-private family's dynamics are kept out of the public eye for the most part, which begs the question, are Elizabeth Olsen and Mary-Kate and Ashley close? Let's break it down.

Elizabeth has taken over headlines this month amid the hype leading up to the Jan. 15 premiere of her new superhero sitcom WandaVision on Disney+. In her Jan. 6 interview with Jimmy Kimmel, the Marvel actress responded to a fan theory her twin sisters would appear in the show. She cracked up at the notion her sisters would re-enter the sitcom business after all these years, but did say, "That would be incredible. It is very meta, the whole thing.” Even though the theory isn't true, it would be pretty interesting to see all of the sisters' careers intersect, since they rarely do.

In 2014, Elizabeth addressed her relationship with her sisters on Watch What Happens Live!, and even chose her favorite twin. "Ashley remembered my birthday," she stated when pressed on her choice. "But I don't hold grudges against Mary-Kate for forgetting mine!" She quickly laughed off the situation, but joked Mary-Kate was "literally going to come home from her vacation" and scold her for revealing their birthday snafu.

Although all three might not interact all that much in public, they're actually pretty supportive of each other. The twins have an entire clothing line named after their siblings: Elizabeth and James. The brand is available mostly at Kohl's and offers more affordable alternatives to their high end The Row pieces.

Elizabeth even showed up to the 2016 CFDA Awards after her twin sisters swept the awards the previous year for their luxury clothing line. The trio arrived on the red carpet together in matching black outfits, making headlines everywhere for the rare joint appearance. It was a sweet moment for fans of the siblings, since their private life as a family is mostly kept away from the flashes of paparazzi cameras.

In 2017, Elizabeth revealed Mary-Kate and Ashley also show up to support her career ventures, too. During a press junket for her film Ingrid Goes West, Elizabeth said the twins gave her "a lot" of acting advice over the years, down to all the right "people to work with." The trio didn't run lines together, but that doesn't mean they're any less close. “They live in New York. I don’t even run lines with my roommates!” Elizabeth stated.

Like with non-famous family relationships, distance often limits the amount of time someone can spend with their favorite siblings. But, clearly, the sisters remain close behind the scenes, even if they aren't starting a fashion line together, appearing in WandaVision together, or walking red carpets all the time.