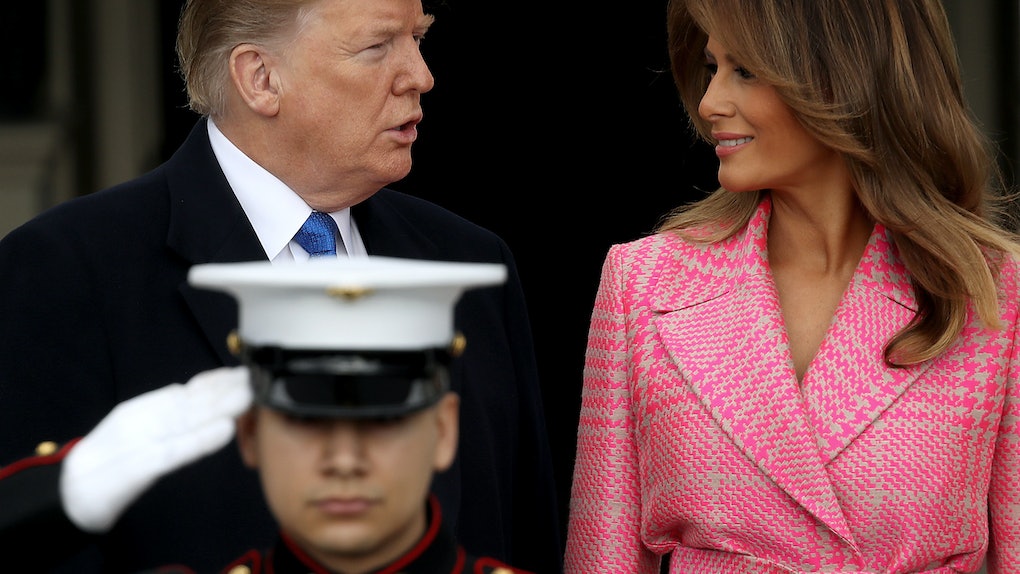 Are Donald & Melania Trump Spending Valentine's Day Together? She Has Other Plans

Today is the day: Crushes, couples, and lovebirds of all stripes are donning their reds and pinks and looking forward to romantic plans for the evening. But are Donald and Melania Trump spending Valentine's Day together? It's not clear whether the president and his wife will be celebrating, or when, but the first lady, for one, has other plans for the day. For the second year in a row, Melania is visiting sick children in nearby Bethesda, Maryland on Feb. 14.

"First Lady Melania Trump will return to the Children’s Inn at the National Institutes of Health (NIH) on Thursday for an afternoon of Valentine's Day festivities with some of their young patients," said the White House Office of the First Lady in a press release to Elite Daily on Wednesday, Feb. 13. "Mrs. Trump will spend time making candygrams, heart snow globes, and participating in various other arts and crafts with the kids." Trump will also hand out White House valentines to the little ones, and meet with caregivers and children's families during her visit.

It's not clear if the couple will be doing anything together later in the evening, or plan to celebrate at another time. But by the looks of it, the president and his wife will be going their separate ways during the day today as usual. Elite Daily reached out to the White House for further comment on the Trumps' plans for the occasion, but did not hear back as of publication.

Festive photos of the president and first lady circulated on Wednesday, however, as Melania appeared to be celebrating early, donning a pink Fendi coat with a $3,000 price tag as they hosted their Colombian counterparts at the White House.

Melania Trump spent her Valentine's Day in 2018 doing the same, visiting children at the NIH Children's Inn. Making time to spend with little ones has always been a hallmark of her legacy as first lady, and is in line with her Be Best campaign, launched in May 2018, that promotes childhood wellbeing.

For his part, Donald Trump has been tweeting — but not, as of yet, about Valentine's Day. Rather, the president has sent out a pair of tweets focused on former FBI Acting Director Andrew McCabe and 2016 Democratic candidate Hillary Clinton.

As for the other members of the Trump family, like father, like son, apparently: Donald Trump Jr. and Kimberly Guilfoyle are likewise keeping things low-key for the holiday, The New York Post's Page Six reports. The two are spending the evening doing a run-of-the-mill table-for-two at a restaurant.

Of course, it presumably wouldn't be too difficult for the senior Trump to get himself a table at any of the restaurants in his signature Trump Organization-owned properties — that is, any of them that haven't closed down due to decreased business since the 2016 election. And in contrast with his predecessor President Barack Obama, who was known to regularly enjoy the city's cuisine, Trump has only made one known visit to a restaurant in Washington D.C. since moving there, and it was to his own steakhouse at the Trump International Hotel, The New York Times reported in December.

As to whether they end up there, or say, hosting a candlelit dinner at home, it's anyone's guess at the moment. But let's hope, at least, that they won't be serving Wendy's and Burger King this time.