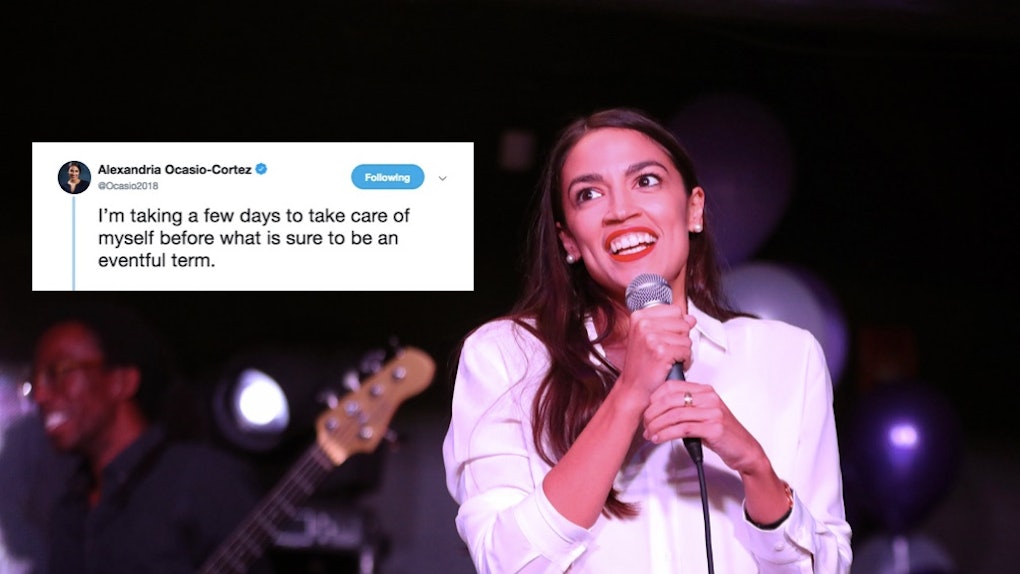 Alexandria Ocasio-Cortez is a remarkable, inspiring person for many reasons. At 29 years old, the Bronx-born progressive politician is the youngest woman to be elected to Congress, and she's passionate about working on issues like climate change, Medicare for all, gun control, and tuition-free college while she's in office, to name just a few. As you might imagine, the Democratic-Socialist Congresswoman-elect has a pretty busy and demanding schedule, but Alexandria Ocasio-Cortez's recent tweets about self-care really highlight how important it is to consider just what taking care of yourself really means for you. It can be more (or much less) than just fancy spas and hot yoga, my friends.

Earlier this week, Ocasio-Cortez took to social media to start this conversation about self-care for both herself and for others, describing that she is about to take some much-needed time to herself to simply relax and "take care of myself" before her term as a Congresswoman officially starts in January 2019.

In a series of Instagram Stories, the 29-year-old politician got super real with her followers about the impact that a demanding, nonstop work life can have on one's well-being, and how she personally plans to deal with the potential burnout she might experience in the coming weeks and months.

I went from doing yoga and making wild rice and salmon dinners to eating fast food for dinner and falling asleep in my jeans and makeup.

We live in a culture where that kind of lifestyle is subtly celebrated as "working hard," but I will be the first to tell you it’s NOT CUTE and makes your life harder on the other end.

She also explained on her Instagram Story that her reason for keeping things "raw and honest" on social media is because she believes "public servants do a disservice to our communities by pretending to be perfect." For the Congresswoman-elect, she said on social media, it's more important for her to be real with her constituents, and part of that includes recognizing that self-care can be political, and that the overall topic of self-care deserves a more nuanced conversation.

I'm taking a few days to take care of myself before what is sure to be an eventful term.

For working people, immigrants, & the poor, self-care is political - not because we want it to be, but bc of the inevitable shaming of someone doing a face mask while financially stressed./1

IMO, it's easy to see where Ocasio-Cortez is coming from. Self-care has become such a buzz-word that it really can be hard to know what the heck you're supposed to do for yourself that doesn't cost an arm and a leg and a vacation to a remote tropical island in order to simply take care of yourself.

In her Instagram Stories, Ocasio-Cortez made a variety of important points in all of this as part of a larger effort to encourage more honest conversations about what people genuinely need in terms of self-care, and what realistically works on a day-to-day basis for all people, not just those who can afford expensive face masks and bath bombs.

The Congresswoman-elect offered an alternative to these trendy forms of self-care by sharing an article from Amnesty International, which talked about how activists can recognize signs of burnout, since feeling totally stressed, tired, and emotionally spent can, understandably, make it pretty hard to continue engaging in your work, even when you genuinely love what you do.

Bottom line: There are so many other ways to consider your own unique needs and your methods for tending to them, none of which have to involve things like retail therapy and spa appointments. All I can say is that I hope Ocasio-Cortez gets some quality R&R before the new year. She deserves it.