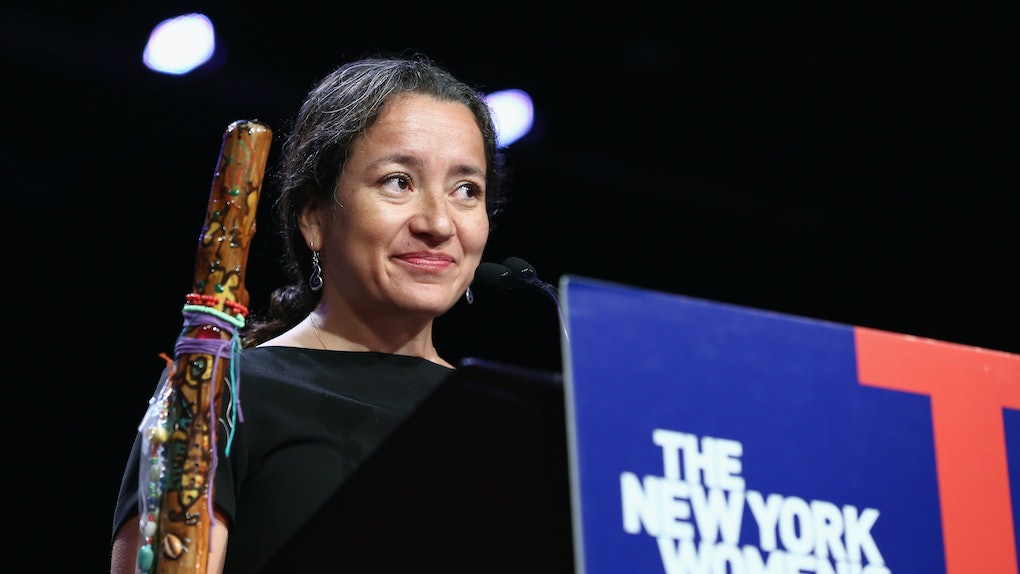 President Donald Trump's second State of the Union address will take place on Tuesday, Jan 5, 2019. Though there's been substantial controversy around this State of the Union due to the recent government shut down, it looks like some good might come out of the event after all — specifically because of one special guest. Representative Alexandria Ocasio-Cortez's State of the Union guest Ana Maria Archila spoke truth to power, and specifically to Arizona Sen. Jeff Flake, during the Brett Kavanaugh confirmation hearings. Now, she'll return to D.C. on Feb. 5 for the State of the Union.

Ana Maria Archila, a community organizer and co-executive director of the Center for Popular Democracy Action, went viral back in September when she and another survivor, Maria Gallagher, confronted Flake in an elevator after he announced he would support Brett Kavanaugh's confirmation to the Supreme Court. Kavanaugh was accused of allegedly sexually assaulting Christine Blasey Ford when they were both in high school in the 1980s, as well as two other women around the same time. He has denied all the allegations. Representatives for Kavanaugh did not respond to Elite Daily's request for comment at the time.

In the powerful encounter captured on video, Archila and Gallagher held the door of Flake's elevator open, forcing him to listen as they talked about their own sexual assaults and asked him why he would support someone accused of assault to the nation's highest court. "I recognized in Dr. Ford’s story that she is telling the truth," Archila said on the video. "What you are doing is allowing someone who actually violated a woman to sit on the Supreme Court. This is not tolerable. You have children in your family. Think about them."

After she spoke, Gallagher said, "you’re telling all women that they don’t matter."

In the hearing mere hours later, Flake surprised many by saying he wouldn't support Kavanaugh's confirmation until after the FBI had conducted an investigation. Though some questioned the thoroughness of the investigation, many credited Archila and Gallagher with causing Flake to reconsider.

In a tweet on Feb 4., Ocasio-Cortez said she was "proud" to announce her guest. She wrote:

Ana Maria is the NY14-er who famously jumped into the elevator with Sen. Flake to elevate the stories of survivors everywhere. She‘s living proof that the courage within all of us can change the

Ocasio-Cortez also shared a tweet earlier in the week, showing a sweet gift she picked up for Archila ahead of her arrival to D.C.

I’m filled with hope by @AOC’s fierce spirit & her relentless belief that we all deserve to live with dignity & share in the abundance of our country. Thank you for holding the doors open for so many, so that our voices can be heard at #SOTU & beyond!

Though it's tradition for members of Congress to bring plus-ones whose work, activism, or actions align with their own beliefs and platforms, many Democrats are skipping the State of the Union altogether this year, including reps from Georgia, Tennessee, and Oregon. In a statement, Oregon Rep. Earl Blumenauer said:

The thought of spending Tuesday night in the House Chamber listening to the reckless, self-centered man who occupies the White House holds no interest for me. Just like in past years, I plan to skip a speech that will be filled with lies, deception and divisiveness.

According to USA Today, Trump is expected to address a variety of topics including crime prevention, job numbers, economic successes and, of course, immigration and border security. Trump has also indicated that he might use the event to declare a national emergency at the Southern border to procure funding for his $5 billion border wall. Stacey Abrams, a Democrat who lost in Georgia's controversial gubernatorial battle during the 2018 midterms, will be delivering the Democratic response to Trump's speech.

So, drama? You bet. Make sure to set your reminders. You don't want to miss this speech.