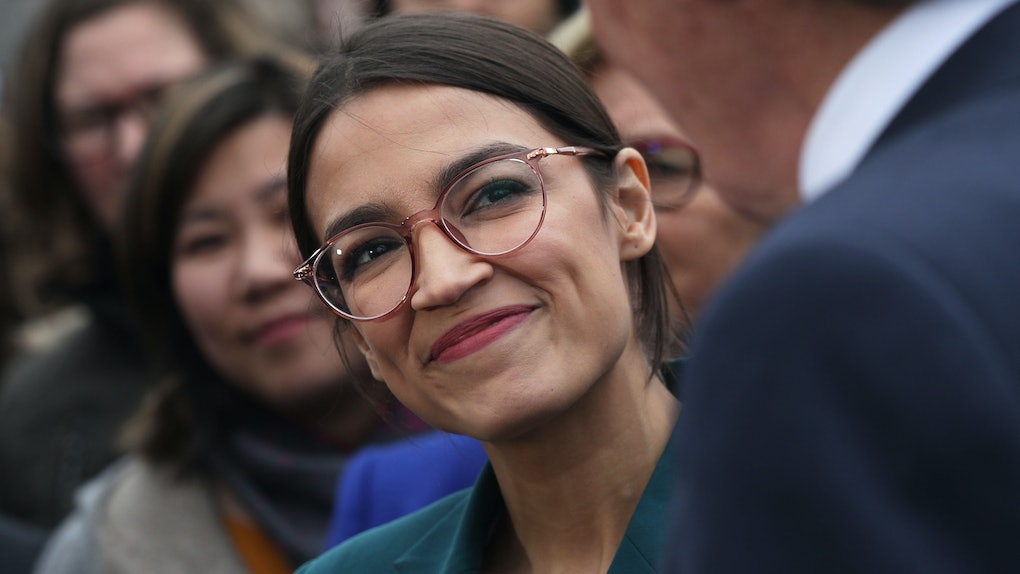 Alexandria Ocasio-Cortez is telling critics to check their facts after yet another right-wing conspiracy theory about the congresswoman has gone viral. On Friday, Feb. 15, a Republican political consultant revealed via Twitter that Ocasio-Cortez's longtime boyfriend Riley Roberts apparently has an official House email account, which he claimed was due to the congresswoman giving her partner a job as a congressional staffer. The 29-year-old, who has touted an anti-corruption policy since the day she took office, wasn't about to let this theory fly, and Alexandria Ocasio-Cortez's response to Riley Roberts' congressional email controversy clapped back at her critics by pointing to precedent. Elite Daily reached out to Ocasio-Cortez's office for further comment on her response to the claims and whether Roberts is employed as a member of her staff, but did not hear back by the time of publication.

Ocasio-Cortez is no stranger to fielding near-constant criticism and speculation since being sworn into the House of Representatives, and on Friday, Feb. 15, she was forced to defend herself once again. Republican strategist Luke Thompson claimed that American taxpayers were unknowingly paying a staffer salary for Roberts, who has reportedly been dating Ocasio-Cortez since college, per Marie Claire. Elite Daily reached out to Ocasio-Cortez's representation for comment how long the congresswoman and Roberts have been in a relationship, but did not hear back at the time of publication. His reasoning? The fact that the web developer apparently has an official House email account, which Thompson shared in a screenshot on Twitter.

He captioned the since-deleted photo:

While you were having a nice Valentine's Day, @AOC decided to put her boyfriend on staff - drawing a salary on the taxpayer's dime. Nice to see her adapting to the swamp so quickly.

Soon after, the tweet was reportedly taken down by Twitter because it included Roberts' email and phone number, which is in violation of the social media platform's rules.

If true, this would have raised questions about the ethics behind such a move, but Ocasio-Cortez quickly took to Twitter to discredit the theory by revealing the real reason Roberts had an official email account.

"Actually this cal designation is a permission so he can have access to my Google Cal," she wrote on Feb. 15. "Congressional spouses get Gcal access all the time. Next time check your facts before you tweet nonsense."

Despite the fact that Ocasio-Cortez said that Roberts was not an employee and his access was granted to allow him to view her Google Calendar, following established precedent regarding calendar access for spouses and longtime partners, Thompson pressed on with his theory that the congresswoman's SO was still doing government work.

"He’s not your spouse. Is he being paid? At what level? It says 'staff' not spouse or boyfriend," he wrote. "Furthermore he doesn’t appear to be in any groups and the House doesn’t use Google. Are you giving him access to your official calendar? Why does he have his own email address?"

I’d also like to know, if he’s not a government employee, in what capacity he’s doing government work. Are you having campaign volunteers handle duties in your official office?

Ocasio-Cortez's chief of staff Saikat Chakrabarti responded, letting Thompson know once again that no, Roberts was not an employee on payroll, and no, he was not doing any government work.

"He's not paid. We have no volunteers in the office. He's not doing any government work," he wrote. "He can see her calendar just like spouses/partners/family members in other congressional office. Check your damn facts before you report bullsh*t. Lazy journos need to learn to do their jobs."

Obviously, Roberts would not need to be a part of any "groups" or communicate with members of the House if his access was granted just so he could see Ocasio-Cortez's calendar, and while only those who are "U.S. House of Representative Members, Officers, Employees, Fellows, Interns and Contractors" are officially allowed access to the system, the move is apparently pretty standard among members of the House.

David O'Boyle, the spokesperson for the Office of the Chief Administrative Officer, reportedly told Fox News and The New York Post that the rules are sometimes bent when it comes to spouses and longtime partners.

From time to time, at the request of members, spouses and partners are provided House email accounts for the purposes of viewing the member’s calendar.

Elite Daily reached out to Dan Weiser, Communications Director for the Office of the Chief Administrative Officer of the House, to inquire about O'Boyle's comment, if he could confirm if Roberts is officially listed as a member of Ocasio-Cortez's staff, and if spouses and partners with calendar access would wind up on a congressional staff list, but did not hear back by the time of publication.

The Washington Post reporter Jeff Stein shared in a Feb. 15 tweet that an apparent House database Thompson shared with Roberts' email on it was not evidence he was a staffer, and he reportedly found GOP spouses who were in the same database. Chakrabarti's also tweeted that this calendar access is common practice.

The Office of the Chief Administrative Officer of the House did not reply to Elite Daily's inquiry regarding Stein's and Chakrabarti's remarks concerning the database and congressional emails.

While Roberts isn't technically married to Ocasio-Cortez, the pair have been together since college and reportedly live together, per Vogue, which would make it more understandable that he'd want to be able to access her Google Calendar. As to the claim that Ocasio-Cortez is unethically putting her boyfriend on payroll, it was pointed out by Refinery29 that quarterly disbursement statements are released for public viewing in the spring and would include all employees paid from her office. According to the official House website, those reports are released by the Chief Administrative Officer of the House, and they include "all receipts and expenditures for U.S. House of Representatives Members, Committees, Leadership, Officers and Offices," so payments to Roberts as a possible staffer would be listed in the "Salaries, Officers and Employees" section at that time. Again, Ocasio-Cortez's representation has denied that Roberts is on her staff, so I wouldn't expect to his name pop up in the spring report.

Whether or not you agree with Ocasio-Cortez's political stances, it seems like it's time to get back to debating her policies, not creating conspiracy theories about her personal life.