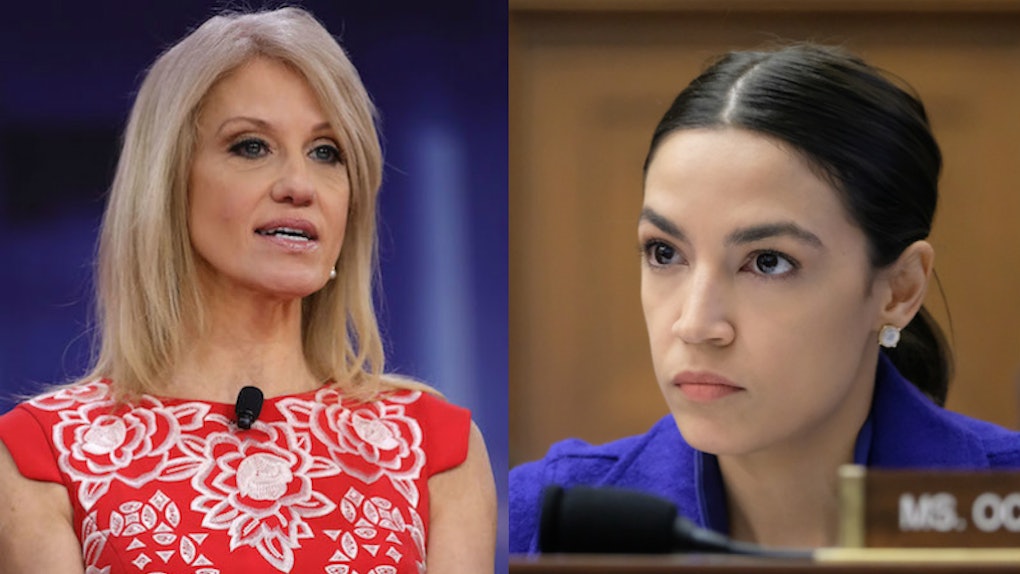 On the morning of April 28, Conway quote-tweeted a now-deleted tweet with commentary on Rep. Alexandria Ocasio-Cortez's (D-New York) "silence" on the recent bombings of churches and hotels in Sri Lanka that killed over 200 people on the island country on Easter Sunday on April 21. The tweet was apparently used to clarify an earlier statement made during Conway's appearance on Jake Tapper's State of the Union on CNN Sunday morning. During the episode, she said Ocasio-Cortez tweeted "many times" about the New Zealand mosque shootings in March 2019, but that she "never once" tweeted about the Sri Lanka bombings, per CNN.

I was referring to @AOC silence about the Sri Lanka massacre of Christians (not 'Easter Worshippers' as Obama and Hillary oddly said).

Shortly after Conway posted the tweet, Ocasio-Cortez hit back with several tweets of her own, revealing what she was in Puerto Rico with her grandmother on Easter day and why she thinks Conway's analysis is misguided. She wrote:

...On Easter I was away from tech visiting my grandmother in Puerto Rico, which continues to suffer from the White House’s incompetent disaster response. Are you trying to imply that I am less Christian? What was the point of you bringing this up on national TV?

AOC continued, noting that the phrase "Easter Worshippers," which Conway criticized as being used by both President Obama and Hillary Clinton in their responses, was important because Easter is the holiest day of the year for Christians. She tweeted:

The terrorist attack in Sri Lanka was horrifying. Saying 'Easter worshippers' matters bc Easter is the holiest day of the year for Christians, & to be targeted on Easter highlights how heinous the attack was - just as saying yesterday’s #SanDiego shooting was on Passover.

In a final tweet, AOC said Conway was using this as an excuse to create suspicion around her Christianity and faith. She continued,

The Sri Lanka massacre was horrifying. No one should be targeted for their religion. If you’re so moved, let’s do more to welcome immigrants fleeing religious persecution.

Ocasio-Cortez also took swipes at the White House's response to Puerto Rico following Hurricane Maria in 2017, which led to an estimate of almost 3,000 deaths. As of March 2019, the Trump Administration reportedly announced no more aid beyond funding for food stamps would be approved for the U.S. territory. White House spokesperson Judd Deere provided an Elite Daily with official statement at the time, saying:

The Trump Administration is committed to the complete recovery of Puerto Rico. The island has received unprecedented support and is on pace to receive tens of billions of dollars from taxpayers. However, the Trump Administration will not put taxpayers on the hook to correct a decades old spending crisis that has left the island with deep-rooted economic problems.

San Juan Mayor Carmen Yulin Cruz responded on March 26, calling the president's behavior "vindictive," and she asked, "How many deaths of Puerto Ricans will be enough?" The White House did not reply to Elite Daily's request for a comment on Cruz's remarks at the time.

On Sunday, following AOC's series of tweets, Conway replied in two parts. First, she wished her best to Ocasio-Cortez's grandmother and then wrote, "Good that you now condemn Sri Lanka massacre. Some found it odd a prolific tweeter was silent. Following day you tweeted about your movie."

In the second tweet, however, Conway closed out the conversation about Sri Lanka and faith and pivoted to new topics like the Green New Deal. She wrote,

@AOC you and I agree. I said on @CNN today & elsewhere that people of all faiths should be free from harm. I judge no one’s faith, incl. yours. Extreme Ideas like Green New Deal & Socialized Medicine DO scare me tho! Areas for bipartisanship? Call me. Much work to do.

Ocasio-Cortez has yet to respond to Conway's latest tweets at the time of publication.

Conway and Ocasio-Cortez are on opposite sides of the political spectrum in terms of ideology and policy and have engaged in public political and ideological debates before. For now, it seems like there won't be much agreement between the two on how to handle tragedy, health care, or climate change (just to name a few issues), but you never know. Stay tuned.