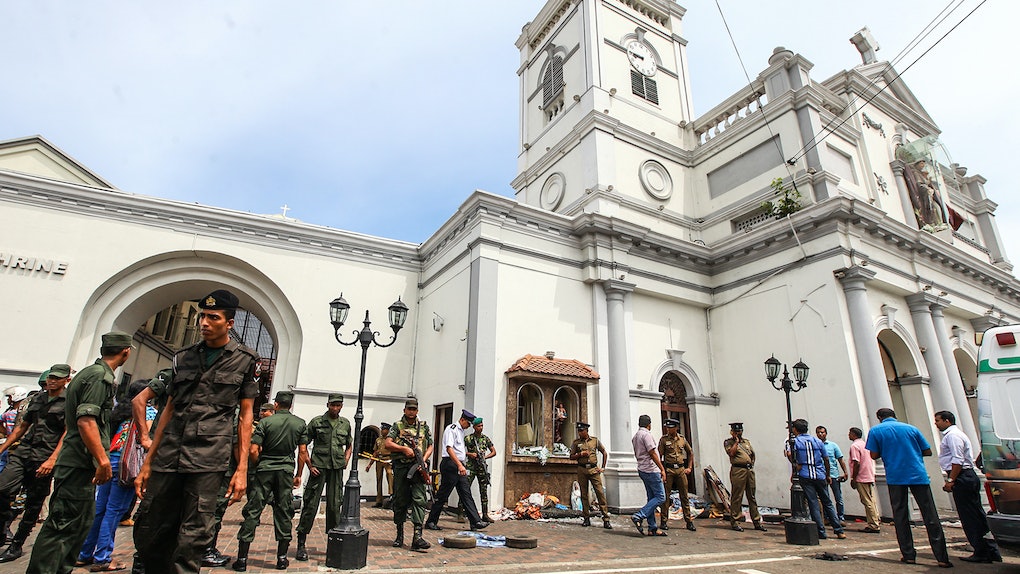 On the morning of Sunday, April 21, a series of fatal explosions went off in Sri Lanka. While the investigation is still ongoing, it's known the coordinated attacks targeted churches that were holding Easter services as well as upscale hotels, per reporting from The New York Times. As of publication, at least 207 people are reported dead and 450 more are listed as injured. If you're currently seeking ways to contribute to the disaster relief, here's how to help Sri Lanka bombing attack victims and assist the rebuild efforts.

The Sri Lanka police have attributed what they're calling "coordinated attacks" to a single group, per NYT. Easter services were disrupted in an unimaginable way when bombs began going off in the morning hours of Sunday, April 21. As of publication, a combined total of eight "blast sites" that include churches and hotels in the cities of Colombo, Batticaloa, and Negombo have been reported, per CNN. As night nears in Sri Lanka, a nationwide curfew is set and there is a social media block across the nation to halt the spread of false reports during the investigation, per the official government website. It is a harrowing situation that will require as much help as possible to aid in the recovery.

There are so many different ways you can help out during this international tragedy. If you have the means to do so, you can donate money to the victims' families, or you can send money to rebuild the structures that were damaged. However, if you don't have the means to donate money, there are so many other things you can do to help. For example, you can donate blood to victims that were injured. There are so many different ways you can help the cause, so if you can take a moment today to do so, definitely take a look at how you can make a change.

When it comes to helping in times of need, every cent definitely counts, so if you have the means, make sure to check out the GoFundMe website. The "Relief for Sri Lanka Bombing Victims" page states the money will go directly to victims of the bombing to go toward medical expenses, and it's looking to raise $500,000 to assist the victims. As of publication, this appears to be the most legitimate fundraising effort, but keep your eyes peeled on the site and on GoFundMe's twitter account for news of new fundraising efforts.

Donating blood to the victims is also necessary. About 450 people are currently suffering from explosion-related injuries, and there is currently a major blood deficit in local hospitals on the South Asian island. If you are living in Sri Lanka, the Sri Lanka National Blood Transfusion has released an alert that they're seeking blood donations for hospitals, according to The India Times, and there's been a major turnout so far. You can go here to see where your nearest blood donation location is located if you are in Sri Lanka.

Not much additional information has been released in relation to donating blood from the U.S., but you can always donate blood and funds to the American National Red Cross. The organization tweeted out that local Asia Pacific Red Cross members and Sri Lanka Red Cross members are assisting during the crisis.

You can also volunteer to go to Sri Lanka in person, to help those in need. Organizations like Volunteer Sri Lanka send international volunteers to help teach at local schools, to care for the elderly, work at the teaching hospital, at the Nurses Training School, and to help rebuilding efforts, according to the charity's website. If you can afford to take a little time off, going with charity organizations is a useful way to help.

What happened in Sri Lanka on Easter morning is absolutely devastating. However, helping out the families and victims affected and the rebuilding efforts is an easy small step. There are so many different ways you can contribute to global support, even if you aren't currently based on the island in South Asia. So stay informed, and remember to keep a look out for more ways to assist those who need it most.

More like this
These Memes About "Putting Back" The Ever Given In The Suez Canal Are Everything You're Feeling
By Rhyma Castillo
Universal Studios Hollywood's Ticket Restrictions For April 2021 Include Major Limits
By Cianna Garrison
The More Contagious B-117 COVID Variant Is Now The Most Common Strain In The U.S.
By Rhyma Castillo
Stay up to date