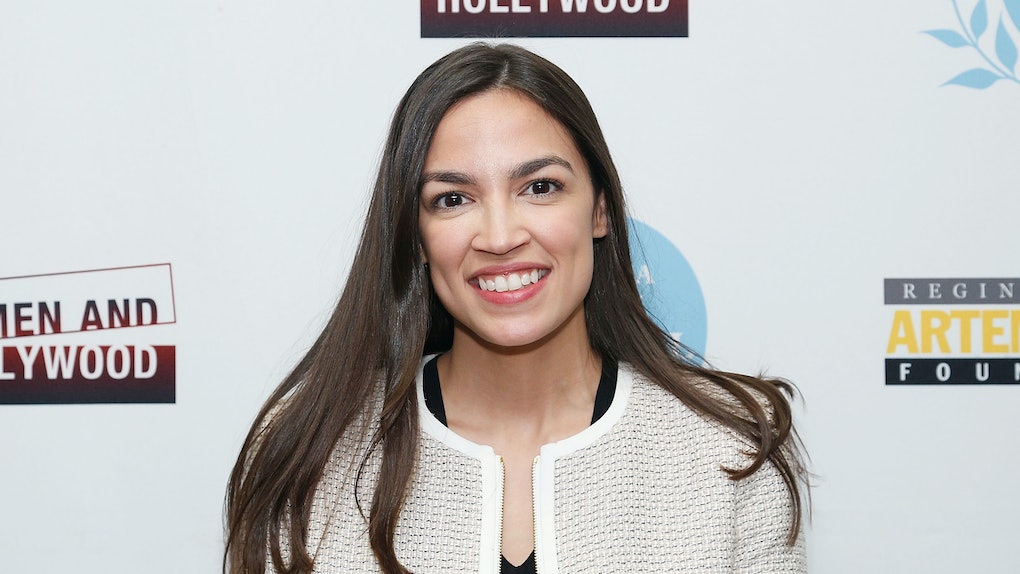 Everyone knows Rep. Alexandria Ocasio-Cortez (D-New York) is making a name for herself in Congress. But did you know the congresswoman is also supremely relatable? In a recent series of Instagram stories documenting a new experience with a certain kitchen appliance, AOC showed followers a side of herself that politicians don't usually show. Alexandria Ocasio-Cortez's Instagrams about her garbage disposal are super relatable and honest, and are totally making me feel sympathetic toward the congresswoman's struggle.

AOC had a moment that'll be familiar to anyone who's upgraded apartments or moved to a new area and found that household setups are a little... different. On Monday, May 6, AOC posted a series of stories documenting her struggles with the garbage disposal in the kitchen of her new apartment in Washington, D.C. In AOC's hometown of New York City, a garbage disposal, which grinds up food scraps in the drain of a sink, is a rarity, so apparently the congresswoman was just not prepared for the weird sounds that came from her sink. In the first few stories, the camera is pointed at the garbage disposal as AOC describes flipping the switch near her sink only to hear the rumbling of this appliance, which she mentioned she's never had before. "OK everyone, I need your help because I just moved into this apartment a few months ago and I flipped this switch and it made that noise and it scared the daylights out of me," she says.

She then continues, "I am told this is a garbage disposal. I've never seen a garbage disposal, I never had one in any place I've ever lived. It is terrifying. I don't know what to use it for or what its purpose is."

If you grew up without a garbage disposal, you can definitely relate to the struggle of encountering one for the first time — not to mention the fear you feel when the contraption gurgles and the confusion about its purpose. AOC had the same confusion and captioned one of her stories, "Like what is the garbage disposal really for? Is it better or worse than throwing something in the garbage?" She goes on to ask even more questions in her Insta story, like whether the garbage disposal is used for food scraps and whether it's environmentally sound.

In one of the stories near the end, AOC asks another question that makes a pretty good point about wealth and privilege. She says, "is this what social mobility is? Using kitchen appliances you never saw growing up?" She accompanied the message with a cry-laughing emoji, which, TBH, about sums it up. Anyone who's ever struggled to figure out someone else's microwave can relate.

Of course, it wouldn't be a true AOC moment without her slightly playfully jabbing at Republicans.

In the next Insta story after the one about social mobility, AOC writes, "All you people telling me to reach in and grab whatever's there are just Republicans trying to test my health insurance. I'M ONTO YOU."

She closes the garbage disposal Insta series with yet another shot of her sink where she suggests that she simply may never turn her garbage disposal on ever again because there may be some mysterious glass lodged in there, and TBH I don't blame her.

Although according to a story she posted the next day on May 7, the mystery of why she'd never heard of a garbage disposal was solved: they used to be illegal in New York City.

Of course, you can't blame her for not being 100% up to date on how other cities and states deal with table scraps. She's already too busy drafting up climate justice proposals, taking aim at organizations like ICE, and starring in a moving new Netflix documentary. The garbage disposal should probably be the least of her concerns, especially because it's so new and scary.