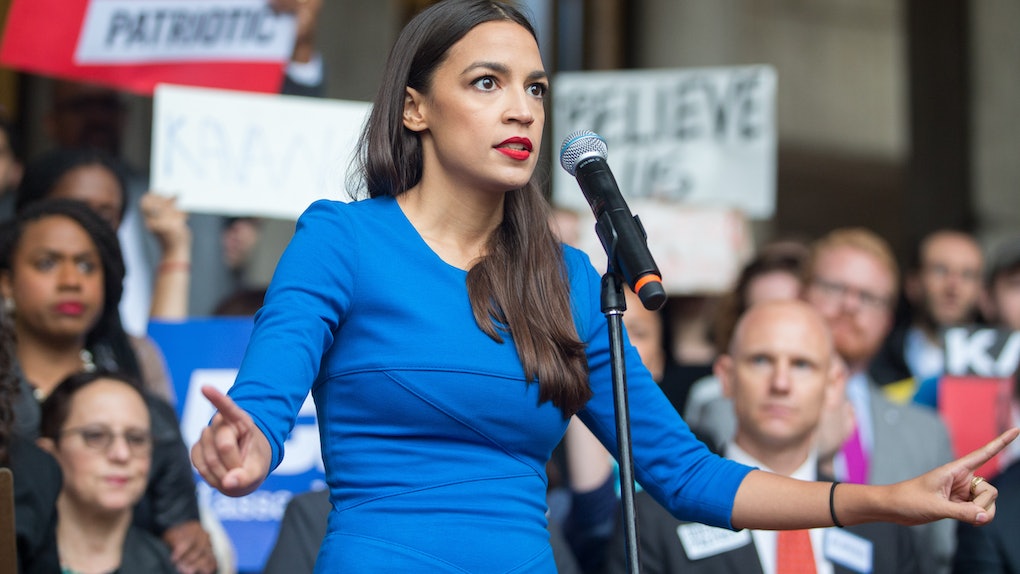 As protesters gathered at New York City's Foley Square in honor of the third annual Women's March on Saturday, Jan. 19, one rising star in the Democratic Party made an appearance to urge her fellow women to "shake the table" in the name of justice. Alexandria Ocasio-Cortez’s 2019 Women’s March speech was a fiery call to action that touched on racial, economic, and social equality as well as environmental justice. The politician's message reiterates the shifting focus of this year's Women's March away from protest and toward implementing tangible change in Washington D.C. — and it is a breath of fresh air for the movement.

As Ocasio-Cortez addressed a crowd gathered at the New York landmark, she reminded her audience of the true meaning of justice and why people continue to march at the annual protest.

Justice is about making sure that being polite is not the same thing as being quiet. In fact, often times, the most righteous thing you can do is shake the table.

After touching on the symbolic timing of this year's march, which happened right before Martin Luther King Jr. Day, Ocasio-Cortez reiterated that the American people are here to "carry the torch forward" by continuing to work towards measures that guarantee equality and justice for the country's constituents.

Briefly touching on the historic results of the 2018 midterm elections, which saw more women and people of color elected to Congress than ever before, the Bronx native said:

"Last year we brought the power to the polls and this year we need to make sure that we translate that power into policy," she told the crowd before turning the speech towards the future and the role that everyone has in the fight for progress.

The youngest woman ever elected to Congress continued, "This is not just about identity, this is about justice, and this is about the America that we’re going to bring into this world."

Ocasio-Cortez has made her mark in Washington D.C. ever since she was sworn in as a member of the House of Representatives earlier this month. She even made sure to send a message of gratitude to the women who paved the way for her to be member of Congress by wearing a white suit to her swearing-in ceremony on Jan. 3. So, it's no surprise that Ocasio-Cortez took to the stage for the Women's March.

Saturday's march in New York City was just one of 350 Women's March protests around the country that occurred as the United States' longest government shutdown in history continues to wage on, and constituents will be looking toward the people in power in Washington D.C. in the coming days to see if both parties are able to come together and find common ground. In the meantime, something tells me that Ocasio-Cortez will be taking her own words of advice and continue to "shake the table."