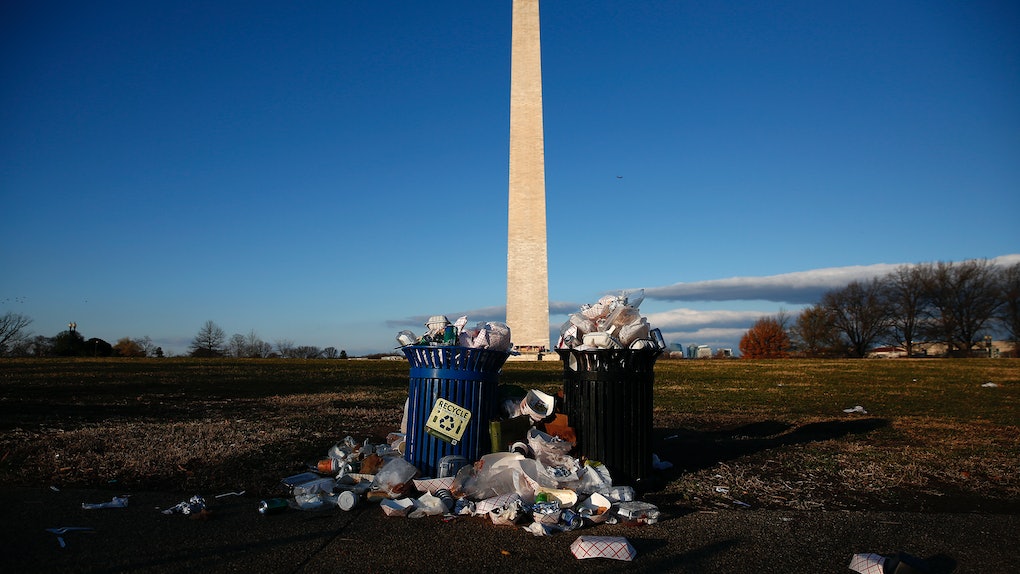 Will The Women's March Be Affected By The Government Shutdown? Don't Cancel Plans Yet

The government shutdown is now in its 25th day, and it may feel as though the effects are becoming more and more noticeable by the hour. Everything from trash collection to national park service to paychecks have been put on hold, so it's understandable, then, if you're wondering how the longest shutdown in U.S. history might affect your weekend plans — specifically, whether one of the nation's largest now-annual marches will still be taking place. So will the Women's March be affected by the government shutdown? Here's what to know.

The Women's March, now in its third year, will be taking place in cities across the country (and world) on Saturday, Jan. 19. And apparently, they mean business. But marchers in the United States might be a little concerned about logistics, given that the country is, you know, in the middle of the longest government shutdown in history. But organizers don't seem to be worried. A statement shared on the official Women's March website says that shutdown or no, the march is on. The statement reads:

They can shut down the government but they can't shut down the #WomensWave! This is a First Amendment protected activity — shutdown or no shutdown, we are marching.

Elite Daily reached out to organizers for additional comment regarding the status of the march, but did not immediately hear back.

Note, however, that this only applies to the official march happening in Washington D.C. — those attending sister marches in other cities would be wise to check an event page to be sure that the local event is still a go.

It appears that at least some local sister marches are not only still holding their events, they're also using it to foster support for folks affected by the shutdown, with the official Wisconsin march encouraging participants to bring food and supplies to offset federal workers' burdens.

The government shutdown went into effect on Dec. 22 after Congress and President Donald Trump failed to pass legislation that would fund parts of the government for the 2019 fiscal year which began back in October. Lawmakers and the president have locked horns over funding for a border wall with Mexico, and both sides appear to be at an impasse. As the shutdown stretches on with no apparent end in sight, the effects are being felt far and wide — including by the 800,000 federal workers who are furloughed or working without pay and who missed their first paycheck on Jan. 11.

While the official Washington march is apparently still happening, it might not be a pretty sight. While federal funding is at a standstill, the D.C. government has dispatched workers to help clean up the city's federal properties, but it appears an imperfect solution as it only empties out bins and doesn't collect trash from the ground. Elite Daily reached out to the National Park Service to confirm the status of the official march's permit but didn't hear back as of publication.

On the National Mall, some restrooms will remain open and trash collection will continue, per NBC, and metro and bus service will continue city-wide. Several museums, kiosks, restrooms, and other amenities that require service in the area may be closed, however. If you're planning to be there, here's a quick guide to all you should know about the shutdown's effect on D.C., including what's open and what's closed. The National Parks Service says:

Open air sites of the National Mall are accessible. All other areas and facilities are closed, and personal services are not available.

More broadly, visitors to D.C. this weekend might be advised to plan accordingly and anticipate closures, lines, and a bit of a mess.