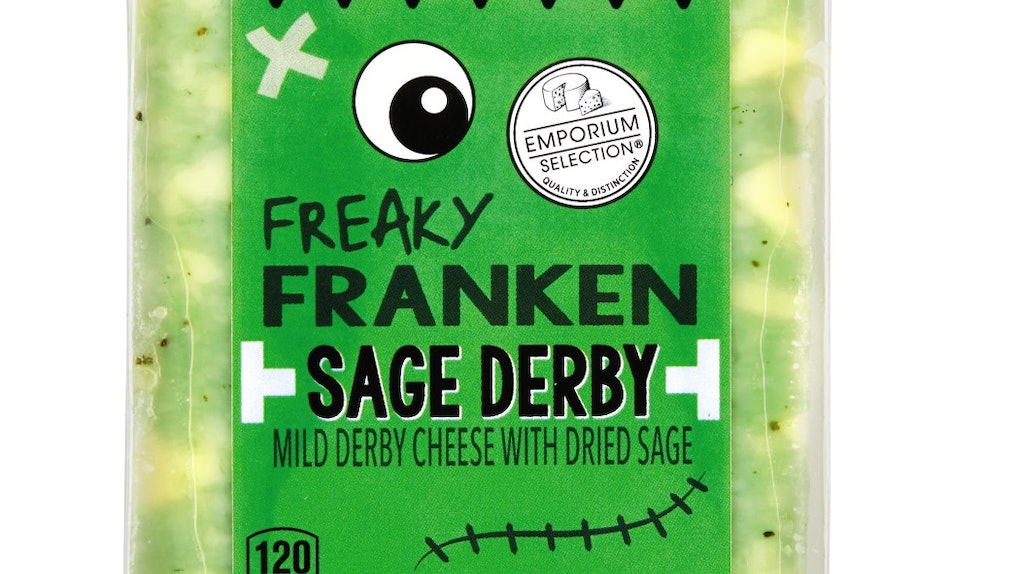 It's that time of the month for October's "Aldi Finds," y'all, and the Germany-based superstore's selection of seasonal sips and bites are chock-full of offerings that pay homage to the scariest night of the year. If you're thinking of stocking up for your wine nights in the most festive way possible, Aldi's Halloween-themed cheeses for 2019 include a dried sage-infused derby and a mild cheddar that play homage to Frankenstein as well as some of the other spooky figures associated with Oct. 31. They're all treat and no trick, and these savory bites are the perfect on-theme addition to your All Hallows' Eve spread.

While I'll be the first to admit that I tend to associate Halloween with all things sweet and sugary, there is something about adding some savory elements to the holiday that make it seem a little more grown up. So, when I saw that Aldi was offering a selection of scary-cute cheeses over the course of the next few weeks, you can bet that I was dusting off my cheese platter in preparation of some scary movie wine and cheese nights with my besties. While a few of these cheeses are popular varieties that you already know and love with some pretty cool packaging, I do like that a lot of the offerings include a fall-imbued twist on some classics by adding seasonal herbs and ingredients like sage, cinnamon, ginger, and nutmeg into the mix.

If you've ever wondered what kind of cheese Dracula would serve at his house parties, you'll want to check out the store's selection of Happy Farms Preferred Transylvania Cave Cheese, which is retailing at Aldi locations for just $3.99 starting on Wednesday, Oct. 2. Per the packaging, which includes a photo of a bat and a mysterious Romanian cave, the hard cheese is actually aged in a salt cave, which definitely adds a cool backstory to the snack. There's also a red wine-infused option for what's sure to be a bloody good addition to any gathering.

Personally, however, I think the real cheese MVPs of Halloween show up on Oct. 16. The Emporium Selection Halloween Cheese Assortment, which will be retailing for $3.99 each, include some seriously cute spooktastic monikers, illustrations, and flavor profiles in honor of the holiday. If you're looking for your classic aged cheddar, you'll want to check out the brand's Bat Knit Crazy, while a Scary Pumpkin Spice twist on Wensleydale cheese with cinnamon, ginger, and nutmeg is basically a cheese version of the PSL you've been sipping all season. Another twist on Wensleydale cheese, titled No Rest For The Wicked and featuring a Day of the Dead-inspired design, features notes of strawberry and Prosecco if you want to keep the summer vibes going.

My personal favorite out of the bunch, which is inspired by Frankenstein due to its mottled green color, promises to be a lot more delicious than it looks. Freaky Franken-Sage Derby is basically a makeover on a mild Derby cheese with dried sage, which in my experience is a completely delicious combination. Seriously, though, this packaging is almost too cute to open and eat, the key word being almost.

Again, these on-theme cheese offerings are on sale at Aldi's locations over the next couple weeks and will only set you back $3.99 each, so I'd grab a handful and prepare for a cheese platter that the Sanderson sisters would definitely be stanning.

More like this
8 Disney-Themed Charcuterie Board Ideas To Add Some Pixie Dust To Your Movie Night
By Rachel Chapman
Mother's Sparkling Mythical Creature Cookies With Unicorn Shapes Are Majestic AF
By Cianna Garrison
Winc's Summer Water Societé Rosé Subscription Is Back For 2021, So Bring On The Wine
By Cianna Garrison
Stay up to date