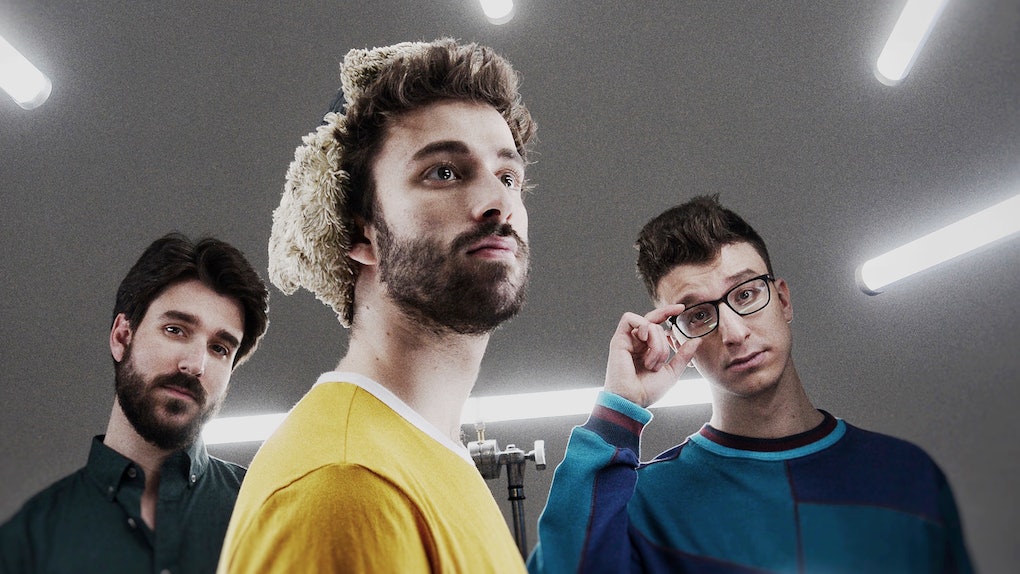 In 2020, celebrities are feeling compelled to get more vocal than ever about the causes they believe in. Fans are no longer settling for their favorite artists staying silent about the issues that affect them, so many celebs are stepping up, whether it's by sharing their personal stories and views directly with fans on social media, or expressing themselves through their art. For the brothers who make up indie-pop group AJR — Adam, Jack, and Ryan Metzger — making their beliefs known has always been a priority. AJR's quotes about writing music that reflects their values will inspire you to stand firm behind what you believe in too.

While in quarantine amid the nationwide coronavirus pandemic, AJR was hard at work making music from the safety of their living room. Beyond the worldwide health concerns, issues of ongoing racism and police brutality in the United States sparked worldwide protests after the May 25 killing of George Floyd, a Black man, by Minneapolis police. Amid the social unrest, AJR have thought a lot about how they can effect change and spread awareness about the issues they care about. "I think the reasons we want to get behind the important causes is because it feels very authentic to us," Ryan tells Elite Daily.

"It's a difficult thing when you're a public name," Ryan says, acknowledging it can be scary to wade into politically charged issues for fear of backlash. Ryan credits social media for helping celebrities take that much-needed step. "[The definition of a celebrity has] changed so much. [The perfect image] has really been thrown out the window with social media, where you can see every aspect of an artist's life."

To AJR, the issues affecting young people today are too important to them to stay silent. "We live in a world where there are so many causes, and that's a great thing because it shows that our generation cares a lot more about making the world a better place," he says.

On June 5, AJR voiced their support for Black Lives Matter in a statement on Instagram.

But AJR doesn't just speak out through Instagram. They stay true to their beliefs by reflecting them in their music. Ryan says: "We would be doing this even if we weren't famous. If you can use your platform for something that's helping the world in addition to connecting your art, isn't that the coolest thing ever?"

In 2017, the Obama-Biden White House tapped the band to record a song for their "It's On Us" campaign, an initiative launched by the Obama administration in 2014 to combat sexual assault on college campuses. Their mission is to change campus culture through engaging young men and prevention education. As of the 2019-2020 school year, the campaign boasts 250 campus chapters and 440,000 supporters.

AJR were more than glad to take part. "I think [that was] the first cause we got behind," Ryan says. "It was about sexual assault on college campuses and we got to go to the Barack Obama-era White House and perform the song that we wrote for the organization. That was a cool stepping stone for the band."

Adam, Jack, and Ryan consistently work real-life experiences into their songs, which is why they resonate so much with fans. Their 2018 song "Pretender" addressed social anxiety and insecurity, while their current single "Bang!" creatively explores the ups and downs of adolescence.

"We kind of took this Broadway Disney villain sound and put it into the 21st century and added more signature, hip hop, drums, and stuff," Ryan explains. "And then we kind of built the rest of the song around it, about growing up and about trying to find your place between being a kid and being an adult."

Each of AJR's songs are all lyrically and musically unique, but there is one common denominator in them all: The guys don't hold back when it comes to speaking out about what they believe in.