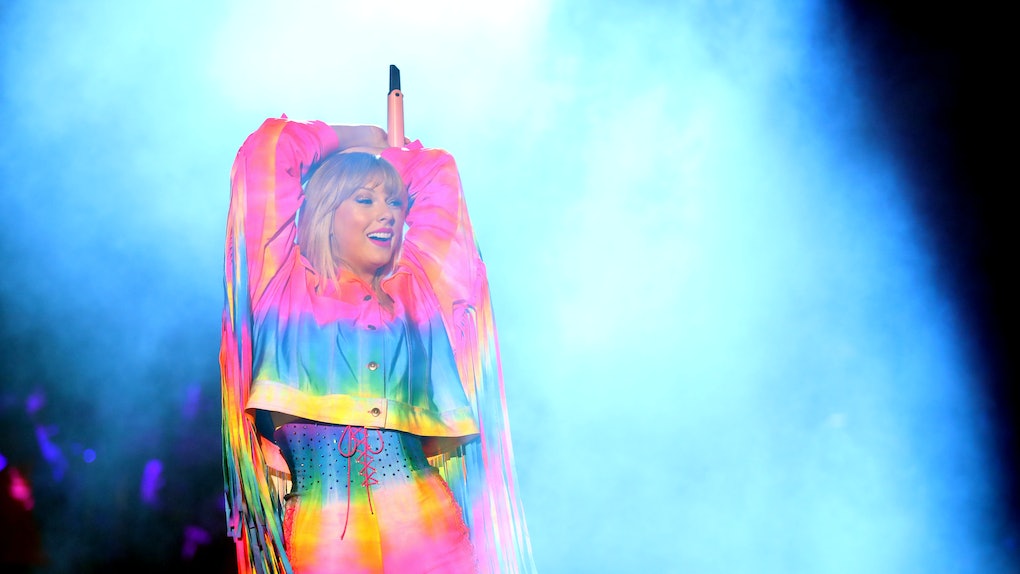 A Taylor Swift x Stella McCartney Clothing Collaboration Is Coming — No, This Is Not A Drill

We're in the midst of a Taylor Swift revolution. Not only is the singer set to release her seventh (!!!) studio album, Lover, on Aug. 23, but she recently revealed that a Taylor Swift x Stella McCartney clothing collaboration is also on its way. Yes, you read that right — the princess of pop is teaming up with the queen of sustainable fashion on a collection that's bound to be all kinds of magical, so start saving your pennies now because I guarantee it's something you'll want in on.

If you've been following Swift's recent reemergence into the scene then you know that it began with a series of pastel-hued photos uploaded to Instagram with a consistent cryptic caption of "4.26." Of course, we now know that that was the date when she released her new single "ME!" along with a range of pastel-hued merch. Prior to the date, fans were speculating that swift might've been releasing a fashion collaboration because of the images of shoes, tulle, and suits she uploaded, and while that theory was initially proven faulty, it's clearly holding ground now.

On June 13, Swift posted a 10-minute Instagram live video in which she spoke more in-depth about her upcoming album and also revealed her collaboration with McCartney. "Another thing I wanted to tell you, for the release of the Lover album, there's going to be a collaboration that I've done with Stella McCartney," she said. "She's been a friend for a really long time and also just a woman that I respect so much. I respect what she creates, how she creates it. There's so much whimsy and imagination and romance to the clothing that she designs."

Indeed, if you follow McCartney's designs at all then you know how enchanting they truly are. Saturated with color, wrapped in prints, and featuring strong silhouettes that somehow toe the line between ethereal and architectural, they're beyond dreamy. They're exactly the types of garments you'd expect Swift herself to wear which, as noted in the Instagram live, she often does.

"I've worn a lot of her stuff recently, and she's heard the new album, and this new collaboration is inspired by the Lover album... I'm really, really honored that she would want to collaborate in this way." While pretty much all other information about the collection like when it will drop, what its price points are, what types of pieces it will include, and where you'll be able to shop it are still a mystery, I have a feeling that it'll channel the aesthetic Swift has been championing on her Instagram account and through her recent merch drops. Think pastel colors, light and floaty fabrics, subtle tie dyes, and otherwise fairytale-like elements.

If you're a Swiftie, you might remember that the singer wore an ice blue gown designed by McCartney to the 2019 BAFTA Awards in February. Could that have been a subtle preview of one of the collection's standout pieces? Only time will tell.