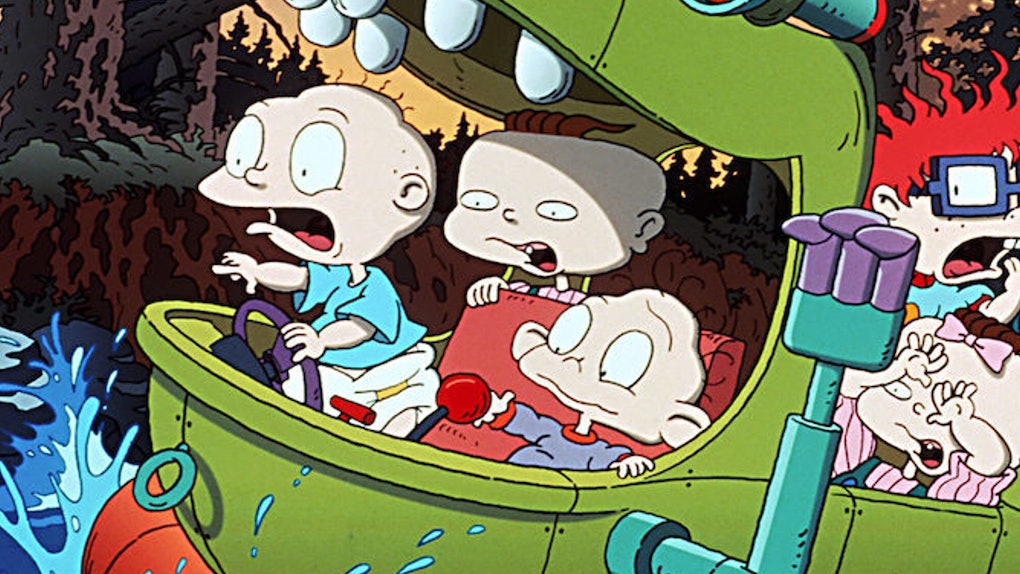 Reptar fans, the world may be your toaster after all, because a Rugrats revival is officially in the works. That's right, a new Rugrats movie and TV series is coming to impart so many relatable nuggets of wisdom to a whole new generation of kids, and my '90s self can't handle it. Get ready for a serious dose of nostalgia and grab a screwdriver, because this beloved band of babies is heading back to your screen for a whole new set of adventures so soon.

In a joint statement from Nickelodeon and Paramount Players shared on Monday, July 16, the studios revealed that beloved main-stays Tommy, Chuckie, Phil, Lil, Susie and Angelica will be making their return to TV with 26 new episodes full of animated fun and plenty of naps, of course. Considering that the Rugrats crew pretty much owned the airwaves for 13 years and 9 seasons when the show first premiered in 1991, I have no doubt that our favorite 'Rats will work their magic again in 2018.

It's tough out there right now, and what better way to escape reality than by grabbing a piece of avo toast and tuning in to follow this band of babies go on all the adventures in the comfort of their living room? Plus, the show’s OG team of Arlene Klasky, Gábor Csupó, and Paul Germain are set to return to the reboot series as executive producers, so I'm already calling that they'll be delivering so many '90s references.

The one piece of information I'm really excited about, however, is that a live-action film featuring CGI characters is also in the works, according to the press release. Tommy Pickles is bringing his crew to the big screen as soon as Nov. 13, 2020, and I can't wait to see what this looks like. While this isn't the first time Nickelodeon has tried to bring the popular series to your movie theater — The Rugrats Movie was released in 1998, followed by 2000's Rugrats in Paris: The Movie and 2003's Rugrats Go Wild — this will be the studio's first attempt at bringing these characters to life via CGI. Basically, all your favorite characters will probably look a little bit different than you remember in the live-action film, and I'm so curious to see how they differ from the originals.

Will Chuckie's fiery red mane still be hair goals in the movie version? Will Angelica still have pigtails? Unfortunately, I have to wait until November 2020 to find out, but I'm so pumped to see some of the millennial crowd's favorite group of friends come to life as live-action figures and meet a handful of new characters.

“Rugrats is hands-down one of the most celebrated cartoons in TV history, and we are thrilled for a whole new audience to meet these iconic characters in brand-new adventures,” Sarah Levy, COO of Viacom Media Networks and interim president of Nickelodeon, said in the statement. “What was true in 1991 when the original show premiered is still true today: kids are fascinated with the world of babies. We can’t wait for today’s kids to meet Tommy, Chuckie and pals.”

Nickelodeon has been on a roll in the nostalgia department lately, and I'm so here for it. In April, the network revealed that Double Dare would be coming back as soon as June 25. In addition, Blue's Clues, Rocko’s Modern Life, and Invader Zim all have reboots in the works. 2018 might be a confusing time, but at least it looks like everything's back to Norman on our TV screens.