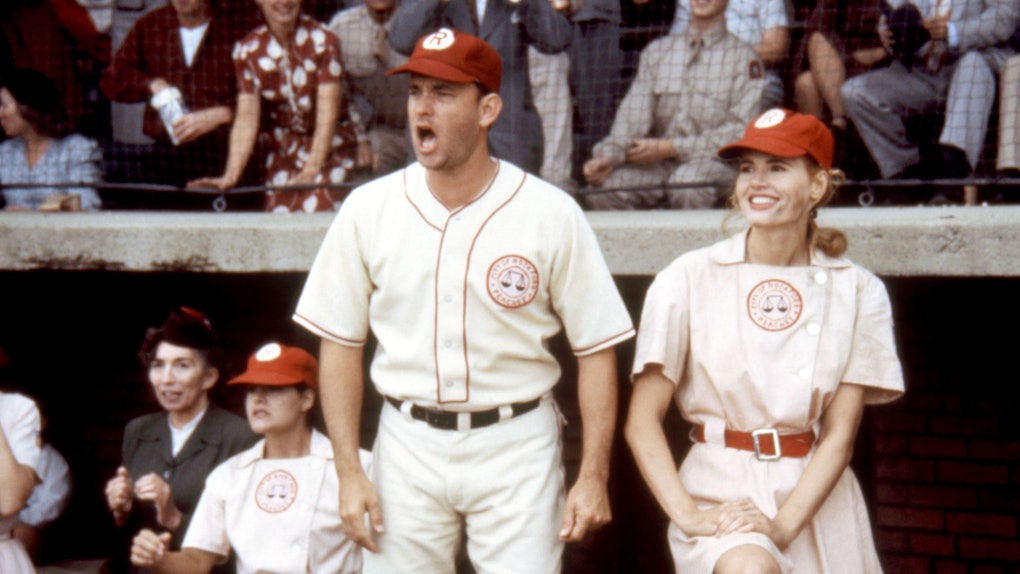 As the movie A League of Their Own taught me, there's no crying in baseball, but I might have to break that rule soon. The 1992 film focused on a fictional version of the origins of All-American Girls Professional Baseball League, which began in 1943 and was initially meant to keep providing fans with baseball when most men were away fighting in World War II. From its star-studded cast to insanely quotable moments, the movie is a feminist classic, and now A League of Their Own TV series by Abbi Jacobson is happening. Grab me a tissue before Tom Hanks yells at me for crying!

According to The Hollywood Reporter, Amazon Studios is developing a half-hour comedy series based on A League of Their Own. Broad City's Jacobson and Mozart in the Jungle executive producer Will Graham will co-write and executive produce the project, which will reportedly be a "modern look" at the 1940s softball league rather than a reboot in TV form. In case we needed more convincing that the series won't exactly be a continuation of the film's story, Amazon confirmed that characters Dottie and Kit, played by Geena Davis and Lori Petty in the film, will not appear in the new show. Jacobson also won't appear onscreen. Well, we may not have our favorite old characters in the series, but Jacobson's behind-the-scenes involvement is enough to keep me invested.

Amazon released an official logline describing the series, hinting that it will include more focus on the broader issues that the United States was facing at the time of the baseball league's prime:

A League of Their Own is a half-hour comedy infusing the warmth, humor and DNA of the classic film, while taking a contemporary spin on the stories of the women surrounding the All-American Girls Professional Baseball League. The show will begin with the formation of the league in 1943 and follows the Rockford Peaches, season to season as they struggle to keep the team alive through close games, injuries, late night bar crawls, sexual awakenings, not crying and road trips across a rapidly changing United States. The series dives deeper into the issues facing the country while following a ragtag team of women figuring themselves out while fighting to realize their dreams of playing professional baseball.

Although her deal with Amazon isn't finalized yet, Jacobson referenced the exciting news on her Twitter, posting a GIF of Davis and Hanks, who played Rockford Peaches manager Jimmy Dugan in the film.

Given the streaming culture and renewed interest in funny feminist TV, I think the show's fate is in good hands, but this isn't the first time A League of Their Own has been adapted for TV. In 1993, CBS launched a sitcom starring Megan Cavanagh and Tracy Reiner in their original roles as Marla Hooch and Betty "Spaghetti" Horn. Seeing as the show was dropped after only three episodes aired, it's best if we just pretend that the Amazon deal is the first attempt at recreating the film's magic for TV.

Jacobson and Graham reportedly reached out to Davis and film director Penny Marshall for their approval of the project, and the series will also address ever-relevant issues such as prejudice and equality. Proving that news of reboots still manage to get people excited, Twitter has mostly reacted positively to the news. Well, same.

It's unclear when the series will hit the streaming service, as Amazon is still considering scripts for the show before making any final decisions about it. We may have to wait a bit longer before hearing anything else about the show, but that just means more rewatches of A League of Their Own, right?