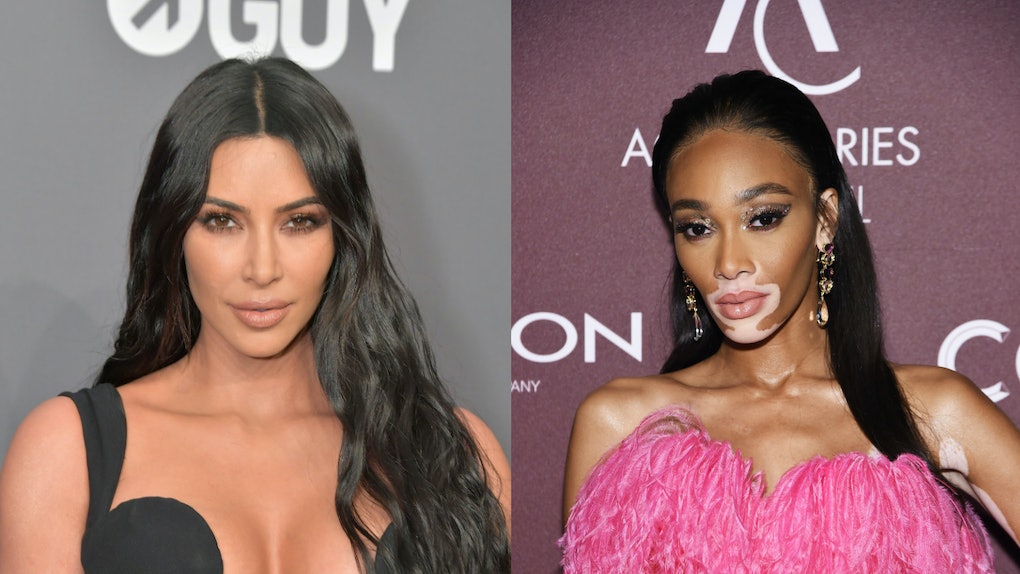 Kim Kardashian-West is superhuman. Between her recent sunglasses collaboration with Carolina Lemke, the announcement of her new body foundation line, and her plans to go to law school, the woman is busy AF. And yet, it's been revealed that a KKW Beauty x Winnie Harlow collaboration is in the works, proving that the beauty mogul isn't slowing down anytime soon. I don't know how she does it but she certainly keeps her fans on the edge of their seats — what's next, total world domination?

KKW Beauty is no stranger to collaborations. Previously, the brand has worked with Kylie Jenner, celebrity makeup artist Mario Dedivanovic, and makeup artist Argenis Pinal on collections that have flown off shelves in record speed. Pretty much anything KKW Beauty releases is an instant hit, so this newly announced collaboration should be no different.

Kardashian-West revealed the news on the latest episode of Keeping Up With the Kardashians, saying, "I am doing a collab with me and Winnie Harlow for KKW Beauty." The celebrity revealed no other information about the collection like what it might include, when it would be coming out, what its price points would be, et cetera. However, the episode did include a behind-the-scenes look at photos being taken of Harlow, who is a model, and Kardashian-West for whatever product(s) they'll be releasing together, and they are beyond gorgeous.

The Keeping Up With The Kardashians Twitter account also posted the news, and fans were beyond excited. "I'm freaking out!" wrote one fan.

"We stan!" wrote another.

Harlow got her start as a contestant on the 21st cycle of America's Next Top Model and although she didn't win, she went on to sign contracts with Spanish fashion brand Desigual as well as Diesel not long after being eliminated. Since then, she's appeared in the pages of i-D, Dazed, Glamour, Cosmopolitan, and more, and walked in the 2018 Victoria's Secret Fashion Show. She's also appeared in music videos for Eminem, Calvin Harris, and Beyoncé (you might remember her from Lemonade), so yeah, she's a pretty big deal.

Harlow was diagnosed with the chronic skin condition vitiligo, which is characterized by depigmentation of the skin. She's spoken openly about being bullied for her condition, writing an essay for Cosmopolitan detailing the harassment she endured all throughout school. "I didn't talk much to my mom about the bullies," she wrote. "I just tried to get through each day. I remember sitting by my window, wishing upon the stars that my skin condition would go away. I wondered, 'Why me?'" The essay culminates with Harlow realizing that she needed to stop caring what others thought of her. "I had to relearn how to love myself by forgetting the opinions of everyone else and focusing on my opinion of myself. Today, my motto is: You only have one life. Live it for yourself, not for anyone else."

There's no doubt her collaboration with Kardashian-West is going to be all kinds of beautiful and empowering, whatever it might include.