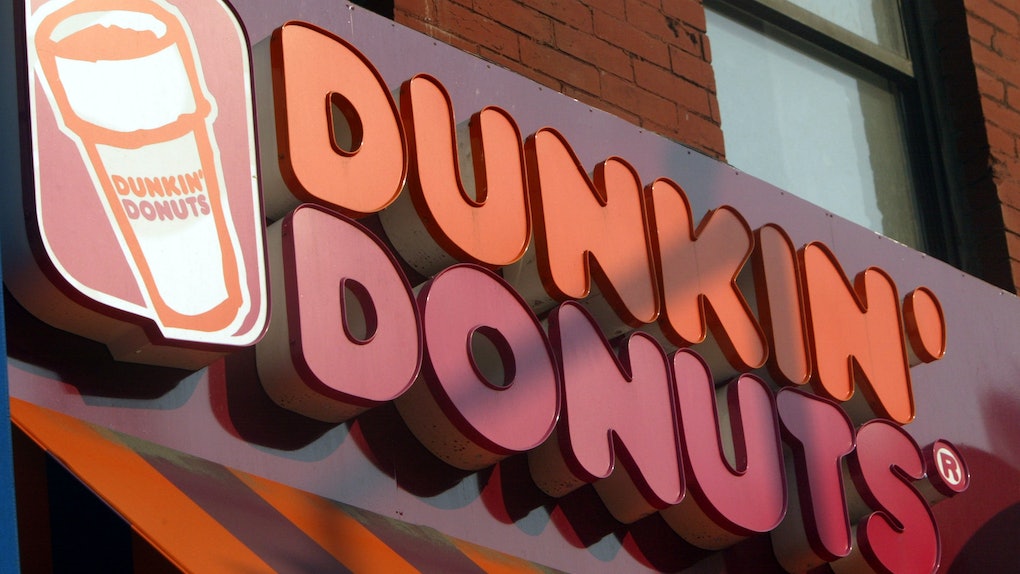 A Harpoon Dunkin' Donuts Beer Is Coming This Fall, So Get Ready To Enjoy

Word on the street is that Dunkin' Donuts and Harpoon Brewery are collaborating on a brand new beverage for you to sip on. The doughnut chain and the Boston-based brewery are working on a seasonal coffee-flavored beer, but it's not available for purchase just yet. Typically, you might think doughnuts go best with coffee, but this pairing is sure to make your wildest tastebud dreams come true. A Harpoon Dunkin' Donuts beer is coming this fall, so get ready to raise a glass and enjoy responsibly.

Well if this doesn't get you excited about fall, then I don't know what will. Dunkin' Donuts and Harpoon Brewery are working together on a limited edition brew set to hit shelves later this fall — sometime in October or November, according to Boston.com. Elite Daily reached out to Harpoon about the partnership but did not hear back at the time of publication.

So, what's the scoop on the impending beer? Federal filings from both Massachusetts-based companies show that the new libation will be called Dunkin' Coffee Porter, as reported by Boston.com. The Dunkin' Donuts beer is labeled as a "flavored malt beverage," according to Boston.com, but this libation will take on the flavors of a porter-style beer. Typically, porters are darker in color (think black like coffee) and tend to have a rich and robust flavor. This porter from Harpoon will be brewed with coffee from Dunkin' Donuts, so it should feature nice, subtle notes of Dunkin's famous roasted coffee beans. Basically, this hearty coffee beer is the perfect way to usher in the cooler fall weather later this year (hurry up and hit the road, summer, because it's way too hot out there).

For now, it is unclear exactly where you will be able to buy the coffee-infused brew, but stay tuned because (hopefully) the 12-ounce bottles should turn up in more than a few places later this year. You'll want to be sure you snag a few for yourself, if only for the fun phrasing on the back of the bottles. In true Dunkin' (and Harpoon) fashion, the orange and purple bottles labels have cheeky sayings like, "This porter is our tribute to all the days that Dunkin’ has helped us fire up the brew kettle,” according to Boston.com.

Dunkin' Donuts is no stranger to the world of brewing and has even dabbled in the beer business prior to this announcement. The fast-food chain partnered with Wormtown Brewery, located in Worcester, Massachusetts, last December to launch the DDark Roasted Brew (made with Dunkin' Donuts coffee, of course). This was the first draft beer for Dunkin' Donuts, and it seems it was a huge success since the company is doing it again.

America is about to run on Dunkin' in a whole new way come this fall. A coffee-style porter from one of my favorite doughnut chains — and breweries — is a win-win for my palate. The Dunkin' Coffee Porter from Harpoon Brewery is going to be perfect for those chilly nights, sitting around the fire pit. Remember to enjoy this beer responsibly.