Is three really a crowd? In the middle of the Oct. 7 vice presidential debate between Sen. Kamala Harris and current Vice President Mike Pence, an unexpected guest decided to make an appearance. A fly landed on Mike Pence's head at the vice presidential debate, and wow — what a metaphor. It's safe to say that everyone watching the debate, and definitely everyone on Twitter, noticed. And they all had a lot to say.

While some Twitter users are congratulating Harris for a well-argued debate, others think the fly was the true winner of tonight's face off. The insect, which showed up with barely 10 minutes left to the debate, really made itself at home on Pence's head — settling in for an approximate total of two minutes and 20 seconds during the last few moments of the vice presidential debate, and during a pretty significant moment as the sitting vice president weighed in on racial injustice, and denied there was systemic racism in policing.

"This presumption that you hear consistently from [Biden and Harris] that America is systemically racist ... is a great insult to the men and women who serve in law enforcement," Pence said. To counter, Harris called attention to Trump's continual reluctance to directly renounce white supremacy, stating that it was "part of a pattern" in his presidency.

Although the sheer presence of the fly alone would be enough to send Twitter into an uproar, the amount of time it spent nestled on Pence's noggin was truly mind-boggling for some viewers. Not to mention the strangely perfect timing of the fly's appearance as the two vice presidential candidates were discussing one of the most fraught and troubling issues of the 2020 election. It was — as many people pointed out — weirdly poetic. 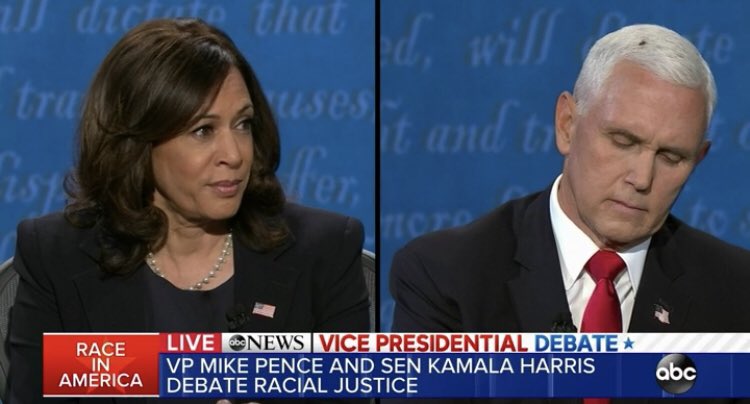 Of course, pop culture always has to enter into it, too. A lot of people took the opportunity to reference the classic sci-fi horror film The Fly, particularly the 1986 remake starring Jeff Goldblum. Who doesn't want a little Goldblum in their politics?

Even Harris' running mate, Vice President Joe Biden, got in on the jokes. Within minutes, the Biden campaign had apparently purchased the URL "flywillvote.com" and had it redirect to iwillvote.com. Meanwhile, a "Truth Over Flies" fly swatter was quickly available for purchase on the Biden campaign site.

While there can only be one winner in the November 2020 election, debate victories, by their nature, are a little more ephemeral. Still, viewers can agree that the unexpected hero of tonight's vice presidential debate flew onto Pence's head, and right into America's hearts.