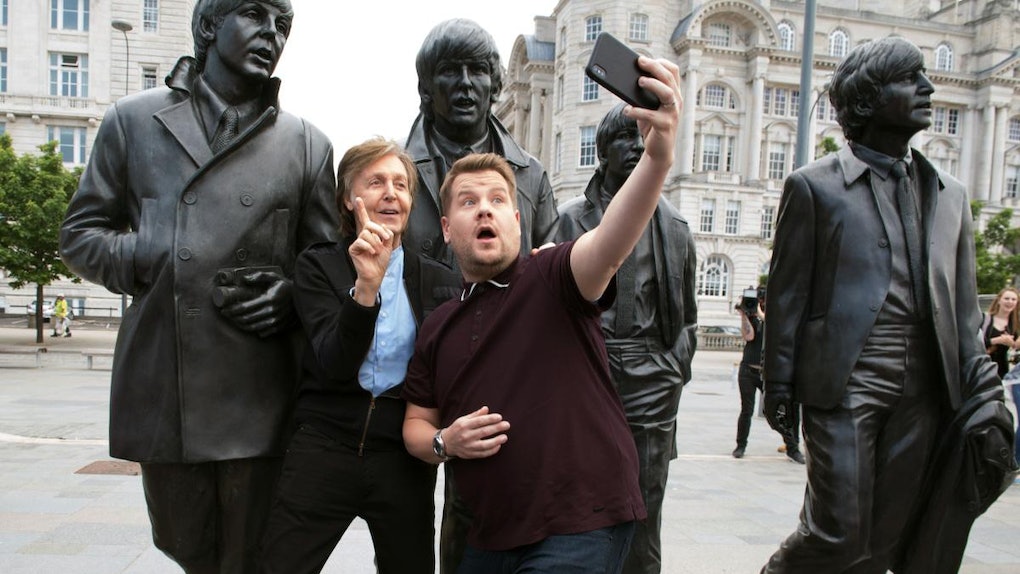 James Corden may be part of the secondary late show hosts who follow the lead-in acts of Colbert and Fallon, but this doesn't mean he's unsuccessful. His Carpool Karaoke segments have been such a hit, they've been spun off into their own standalone series produced by Apple Studios. Now, the bit has a new spinoff to add to their growing collection: a standalone primetime special, starring one of the most popular A-listers ever to grace the passenger seat of his car. The Carpool Karaoke Paul McCartney special will star a full hour of Cordon singing with former Wings frontman and forever-Beatle Paul McCartney.

Carpool Karaoke was one of the sketches Corden brought with him when he relocated from the U.K. from Los Angeles. The original was a Red Nose Day sketch. Red Nose Day is the long-running BBC telethon to raise money for children in need, where various stars from their primetime shows do comedy sketches.

Corden, as part of the BBC sketch show Gavin & Stacey, did a piece as his character Smithy. Smithy is on his way to pick up an old friend he hadn't seen in a while to hang out, only to get call demanding he come into work. Except, the passenger turned out to be George Michael, so they sang all the way to their destination, the Red Nose Day studio.

The American version is set in LA, with the passenger getting on board to commute using the HOV lanes. But a few have been Corden playing chauffeur to those who won't come to him, like Madonna in New York City, and in London with Adele. Paul McCartney's original segment was also chauffeur-based, set in the artist's hometown of Liverpool.

The original segment, which aired as part of the June 21 episode of The Late Late Show, was longer than most, clocking in at 20+ minutes. But McCartney, who has always been an enthusiastic performer who genuinely loves making music with anyone who wants to join him, apparently gave them so much footage, CBS decided they should turn it into an hour-long standalone special.

According to Deadline, Ben Winston, executive producer of The Late Late Show said:

We were overwhelmed by the response to our ‘Carpool Karaoke’ with Paul McCartney. We loved making it and knew we had something special, but it was so wonderful for us to see how many people watched and enjoyed it. I think it resonated with people as Paul’s music speaks to every generation, young and old, especially today. The message in the music is as relevant now as it has ever been. After the shoot, while we sat in the edit, we had to cut so much we loved for time. Not only did Paul do a concert in that Liverpool pub, but James and he discussed so much in the car. We are so delighted CBS has given us this primetime special to make an hour-long version of this ‘Carpool Karaoke.’ Now everyone can see the joy of that concert and more of their chat.

Carpool Karaoke: When Corden Met McCartney Live From Liverpool will air on Monday, Aug. 20, 2018 at 8 p.m. ET on CBS.