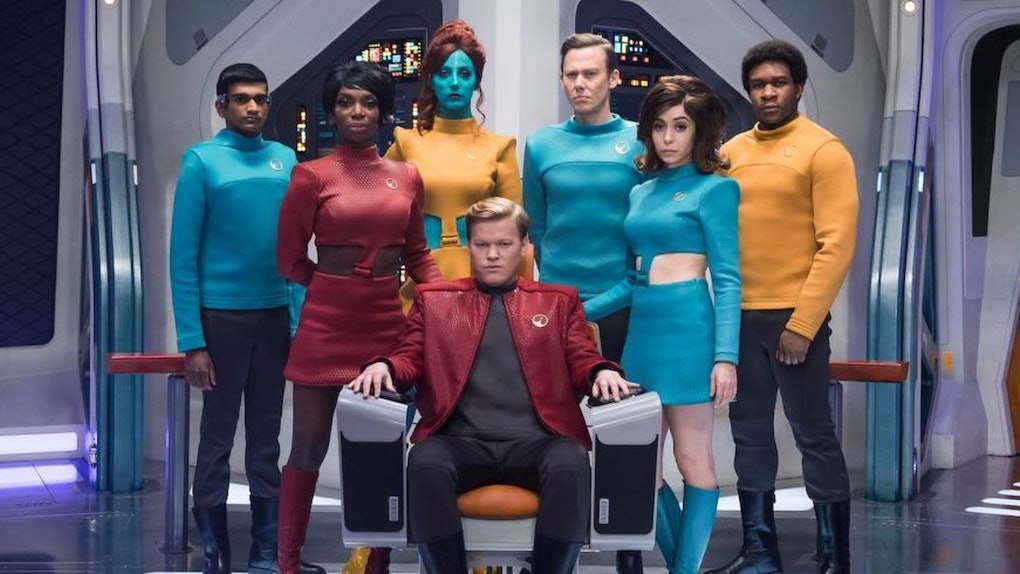 Black Mirror reached new heights in its newly released fourth season, specifically with its out-of-this-world Star Trek parody episode "USS Callister." And now, the breakout episode of the new season could become more than just an episode — both the director and star of "USS Callister" are enthusiastically talking about turning the space-age episode into its own spinoff series. So will a "USS Callister" Black Mirror spinoff series happen? Let's get into all the exciting details.

The director of "USS Callister," Toby Haynes, told the Hollywood Reporter that he thinks the episode is one of the best pilots for a space show ever, and that he would love to further explore the complex universe presented in the episode in a full spinoff series. Haynes isn't alone: Episode star Cristin Milioti also told the Hollywood Reporter that she "would love to see" a series spinoff from the episode. With all this enthusiasm from the main forces behind the episode, on top of the vast and open-ended nature of the episode's final moments, a full "USS Callister" spinoff series could definitely become a real thing soon enough.

Spoiler alert: The rest of this post will contain specific details about "USS Callister," so don't read on until you've seen the episode for yourself. What was expected to be just a fun Star Trek parody episode of Black Mirror surprised viewers by being the most timely, most twisted, and most adrenaline-pumping episode of Season 4. It doesn't take too long for viewers to discover the dark secret of the Starfleet-esque USS Callister: that it is actually a virtual prison where a disgruntled software engineer named Robert Daly (Jesse Plemons) can simultaneously live out his fanboy fantasies while also torturing digital clones of his IRL coworkers that he feels have slighted him in some way. While most Black Mirror episodes end on a bleak, devastating note, "USS Callister" actually gives our heroes a hopeful ending, as Daly's newest captive Nanette Cole (Cristin Milioti) ousts Daly from his captain's seat and leads the crew into a wider video-game outer space world without Daly in it.

As both director Toby Haynes and star Cristin Milioti point out, that "blasting off into a new galaxy" ending really does lend itself to some followup, possibly even in the form of a whole spinoff series. Haynes — who has worked extensively in acclaimed British TV series, including Doctor Who and Sherlock — said that he thinks the episode is perfect for a spinoff:

I’d love to do a TV series of "USS Callister" — it’s probably one of the best pilots for a space show ever. And I made it! So I’m keen to see it as a TV series. I think [Black Mirror showrunner] Charlie [Brooker] might revisit it as a Black Mirror. Whether I’m the one to do it, I don’t know. Being a fan of the show as much as I am, and being a part of making it, I’d love to work with that crew and cast again.

Cristin Milioti, best known for her starring roles in How I Met Your Mother and Fargo, echoed Haynes' enthusiasm for a spinoff series:

I would die if they turned this into a spinoff series because I do want to see that group of people figure it out, because it’s so real. They’re very funny and very dysfunctional, but it’s also a group of coworkers from an office — it’s like The Office in space. They’re stuck in this thing they didn’t even create and they would just have to battle aliens. It’s such an incredible concept.

As for what a potential "USS Callister" spinoff series might look like, both Toby Haynes and Cristin Milioti shared some of their ideas. One of the most interesting parts of the episode that they both would love to continue exploring is its split between the intergalactic virtual world and the more true-to-life actual world. A TV spinoff could see the digital version of Nanette Cole and the rest of her crew going on adventures across space, while in the real world, Robert Daly is either dead or comatose, and the real Nanette's fingerprints are all over his apartment. There's definitely a lot more to get into there.

"USS Callister" and five other episodes from Black Mirror Season 4 are currently streaming on Netflix.