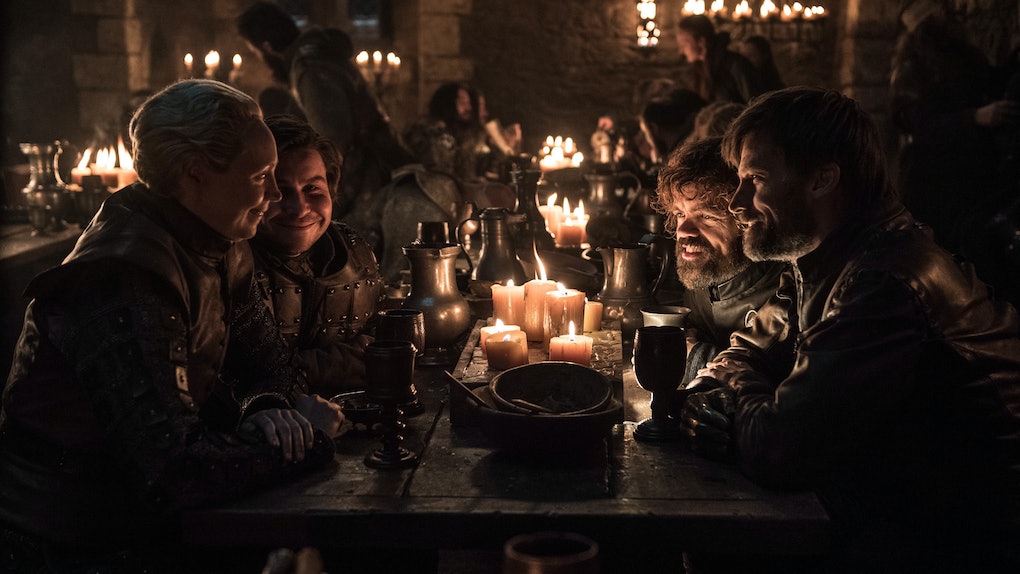 Game of Thrones Season 8 isn't just the final season of the show. It's also a tribute to the series history, starting with the premiere, which was practically a love letter to the show's pilot back in 2011. While not every episode is quite as chock full of references, the series calls back to its history (and the A Song of Ice and Fire books) whenever possible. In the latest episode, the Game of Thrones Season 8 Episode 4 easter eggs were mostly confined to the post-battle feast at Winterfell, but they still came thick and fast.

One clip that probably wasn't an easter egg, but might have felt like one to book readers was the way Rhaegal died. The dragon's namesake, Rhaegar, was killed from a spear to the chest from Robert Baratheon, and "blood flew like jewels" from his chest. (The book describes this several times, sometimes comparing the blood to rubies.) Rhaegal's death in this episode felt like a match to that, especially as the blood flew out of his chest before he crashed into the sea.

While that one might be a bit far-fetched, some of the other references and callbacks were much more direct. Let's run them down.

1. The Opening Credits Reflect The Damage To Winterfell

This week the opening credits reflect the state of Winterfell after the battle. Outside the walls, the funeral pyres sit, inside the castle, the Great Hall is wrecked.

Jon Snow's speech at the funeral for the fallen is pulled from the Night's Watch eulogy, which fans heard Maester Aemon give in Season 4.

Bran makes a passing reference to Daeron Targaryen when talking to Tyrion at the feast, to the delight of book nerds. In A Game Of Thrones, Jon Snow idolizes this historical figure. When Benjen argues Jon is too young to take the black; he counters: "Daeron Targaryen was only 14 when he conquered Dorne."

4. The GoT Showrunners Had A Cameo

After eight years, showrunners David Benioff and Dan Weiss show up in front of the camera. It was the same scene as the infamous coffee cup, so maybe that wouldn't have happened had they been doing their regular jobs.

5. Podrick Is Still A Ladies Man

While everyone else was debating the meaning behind the Hound and Sansa scene, Podrick was leaving the party with not one, but two girls.

Arya once told her father she didn't want to be a lady. That wish has come true, as she turns down Gendry's marriage proposal. "I'm not a lady. That's not me."

In a callback to Season 2, when Bronn bursts in on the Lannister brothers with news he's been sent to kill them, Tyrion starts to quote Varys: "Power resides..."

This isn't quite an easter egg as much as it's an answer to every last person who has been asking how Jon and Daenerys are related. She's his aunt! Thank you Varys!