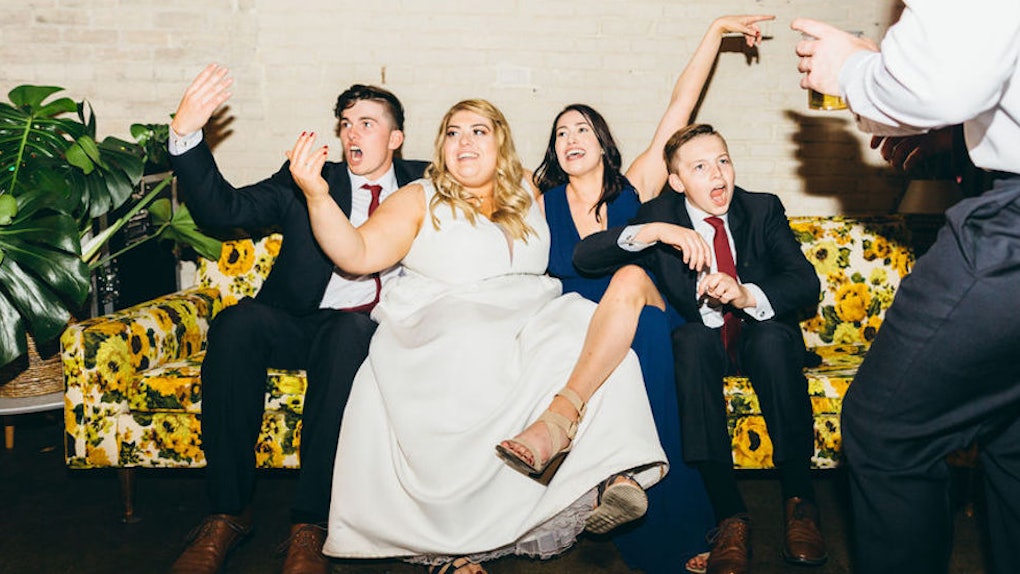 8 People Reveal How To Crash A Wedding & Not Get Caught, Based On Personal Experience

I, admittedly, have never crashed a wedding. I’ve seen Wedding Crashers a million times but I’m too chicken to try it IRL, and honestly, the opportunity has never really come up. But I’ve always wanted to! People talk about how it’s a great activity to do on a date because, hi, free drinks, good music, and what are the odds someone you don’t know actually asks you, “Bride or groom?” The thing is, knowing how to crash a wedding without getting caught is kind of an art, and in order to avoid any awkward encounters or close calls, you have to know how to get by.

Imagine just casually going to a hotel bar for drinks and stumbling across a group of bridesmaids on their way to a reception. Or coming across a bride in head-to-toe white taking photos outside a gorgeous church. Do you join in and try to pass as part of the crowd, or do you silently wish them well and carry on your way? I’ve always picked the latter, but after reading these expert accounts from the wedding crashers of Reddit, and from people who've seen others crash weddings successfully (or unsuccessfully), I'm starting to think that maybe next time, I’ll slip on a pair of heels and join the party. Here’s how they’ve done it, without getting caught.

I don't know if this qualifies but there was a hotel my friends and I would stop to piss in while walking between bars. We were walking through and the wedding party thought we were interesting, we were punks, and asked us to stay. We did and we danced and drank and had a great time.

But you should try to at least know someone.

One of my bridesmaids and I "crashed" a wedding that her sister was in - the bride was the daughter of her parents' friends, and when she heard we were in town for the weekend she invited us to come to the reception after dinner. For a wedding at which I knew literally no one except my friend's family, we had quite a good time. The MOH was the bride's twenty-year-old sister, who got very drunk and kept insisting she was going to go home with her "significant brothers".

Definitely try to blend in.

I witnessed an attempted crashing that wasn't all that exciting. I saw a couple coming in the front doors of the venue well after the party was in full swing, and the woman was wearing a very brightly-patterned dress that I didn't recognize, so they stood out immediately. The bride and groom were right near the door at the time so they stopped the couple like "...can we help you?"

Apparently they said they were visiting from out of town and heard the venue was cool spot and that there was a reception that night, so they decided to come check it out. The bride sweetly told them it was a private event and they left.

Pretty tame, as things go, but I'm still shocked by the nerve of those people!

Got a few free drinks out of it, wasn't as exciting as it is in the movies. Was at a hotel with some friends for a night out and we were dressed somewhat decent to go out. There was a wedding reception there that night so we went in and got some drinks at the open bar hung out for a bit and then left.

So, I attended a wedding at a hotel in Boston with a few of my friends. This hotel was large enough to have 2 or 3 different wedding receptions at the same time.

My friend thought he could sneak away from our wedding and mingle his way into the larger one. He made his way over and began talking to a small group of people

My friend is 6'4" and tan - of Greek origin. The wedding he was attempting to crash was for 2 Japanese families, of which the average height was 5'7". Needless to say, he wasn't able to blend in and was asked to leave almost immediately

And don't do anything silly.

I only crashed one wedding. I saw a wedding party going on at a hotel I was staying at. It was fancy, everyone looked nice. I looked like a homeless drunk, which I was, minus the homeless part. It was way too easy for me to get in, I quite literally walked through the doors to the ballroom without anyone saying a word. I wandered around for about 30 seconds trying to think of some way to become a welcomed member of the party. Whilst doing this, I tripped on an extension cord powering the stereo, face planted, and promptly terminated the music. Everyone looks to the stereo. Drunk estimate: 100 people watching me wiggle my way back to sturdy standing position. Groomsmen escorted me out.

Try to do your research!

Having done it- I would say, yes, it's a thing. But similar to the movie I've only ever done it at BIG weddings where there's almost no way to tell if you were invited. I just dress nice and bring an envelope with "To the Newlyweds" on it (as a gift) and leave it on the table.

Enjoy the ceremony to get all the details you might need later about those who are in the brides and grooms party. Most are pretty damn straight forward.

Now the only thing that might screw you over is if the dining area tables are labeled. But some big weddings don't always keep track of who's a plus one or if someone's bringing one.

There's usually a table without labels so people can sit if they don't really know anyone.

Either way. It doesn't hurt to screw off while they're doing the groomsmans speeches. Etc. Its when the dancefloor opens and the open bar service starts. It's just a party where everyone dresses well, drinks, and dances the night away. If you're an easy going people person, no ones really likely to catch on. If anyone's caught off guard and asks who I am- I just say i went to college with the bride/groom/best man/whoever is convincing.

But most importantly, do your best to play it cool.

Try swanky hotels any Saturday during the summer. Show up in a nice suit (charcoal or navy is safest, covers the most dress codes) with a date or a buddy, grab a drink at the bar, and walk around until you find the banquet/ballroom. Slide on in. For a real power move, try to show up to the ceremony too...if people see you there seated for that, you'll have an easier time blending at the reception. And I know this is full creeper mode, but once you get there, look up the couple on Facebook or LinkedIn to grab a few pieces of info to throw into conversation if anyone asks you how you know them. Saying you met in college is a safe excuse for anyone 10+ years older than you. If someone your age asks, there's really no safe answer other than a one-off activity, like you met on a plan and hit it off or something. +10 bonus points for bringing a card...it will make you look like you belong, plus it will be hilarious for the bride and groom to open it after they get back from their honeymoon. Godspeed my friend. Please report back with pictures.

Wedding crashing is clearly no easy feat, but if you're going to do it and you think you can pull it off, I hope these stories taught you a think or two. Remember: Do dress nicely and bring a card. Don't get drunk, trip over an extension cord, and fall on your face. Got it? Good.