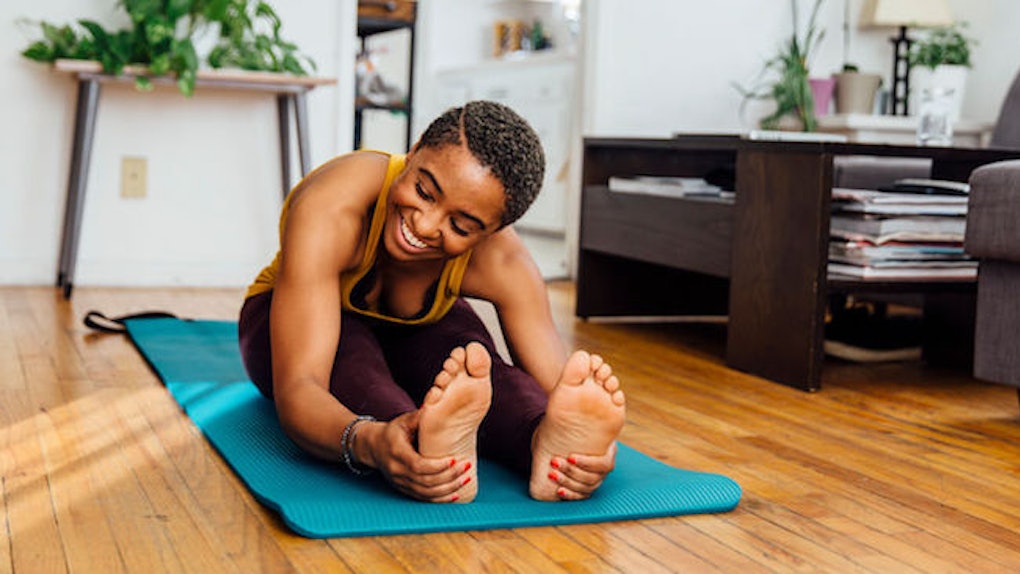 8 Embarrassing Moments In Yoga That Legit Happen To Everyone, So Don’t Even Sweat It

Going to yoga class is one of the most blissful forms of self-care you can provide for your body, mind, and soul. Any yogi who regularly stretches it out on the mat knows the feeling of pure, euphoric relaxation that sets in after a few deep breaths and fluid movements. However, just because yoga is typically a super ~zen~ experience, that doesn't mean there aren't some embarrassing moments in yoga class from time to time, too. These awkward instances will probably make you cringe or turn beet-red just by reading about them, but honestly, anyone who's practiced yoga has definitely experienced them, too, or is bound to experience them at one point or another.

As a long-time yogi and teacher myself, I can confidently say that embarrassing moments in yoga truly never stop happening — that's just life. The thing is, though, when you're a beginner, you might want to move to Sweden, dye your hair, work on a goat farm, and reform your entire identity when you, say, fart in plow pose (totally not speaking from personal experience here). But if you decide to stick it out and show up to the next class, you'll quickly realize that everyone has experienced an embarrassing yoga moment of some kind atop their own mat, and it's literally nothing at all to stress about.

Take these eight relatable, embarrassing yoga moments, for instance. Talk to just about any yogi, and I'm willing to bet they'll knowingly nod and recall the moment that they did one of these exact cringeworthy things in class, too — but hey, they lived to tell the tale, which means you definitely can, too.

When You Queef In Headstand

Let's just get right into it, shall we? I'm pretty sure every woman in existence who's dabbled in yoga inversions can relate to the experience of queefing while upside down.

According to Verywell Fit, the cause is pretty simple: Air gets trapped inside the opening of your vagina, and when it eventually has to come out, it makes a cute little noise — aka, the infamous queef. It's all fun and games when you do it at home, but when you're in a studio, owning an invisibility cloak feels like it would be real lit in the moment.

But seriously, listen to me when I say this, girl: It. Is. Fine. We all queef, and what are you really accomplishing by obsessing over that one moment and how awkward it felt, when you could just as easily laugh it off and go on with your life?

When You Face-Plant In Crow Pose

Face-planting in more advanced asanas is also pretty common in yoga, especially when you're just starting to experiment with these types of poses. It's so common, in fact, that it even happens to the most experienced of yoga teachers: "Once I fell when I was demoing crow [in front of my entire class]," Kate Van Horn, a yoga teacher, wellness blogger, and co-founder of the GOOD fest, tells Elite Daily over email. "It was a face-plant, but I made it a deep life lesson about still trying after."

Hey, it's all about perspective, right?

Whether you have your legs thrown over your head in plow pose or you're wringing out your internal organs in a twisted asana, farting is almost inevitable when you're a committed yogi. "In yoga in particular, twisting postures — like revolved crescent lunge and prayer twist — are historically thought to aid in digestion," Claire Jacques, an instructor at CorePower Yoga tells Elite Daily over email. "Twisting from right to left compresses your ascending and descending colon."

In other words, yoga makes you fart, y'all, and there's really no way around it, so don't sweat it too much. After all, your body's just doing its job.

Ah, prasarita padottanasana (aka wide-legged forward fold), how I love you and your uncanny ability to make my yoga class students closer than they ever wished to be.

If you practice yoga on the reg, you've most likely been in a super-packed class before where the mats had to be really, really close to one another in order to accommodate everyone. In situations like this, when you're getting into a pose like wide-legged forward fold, you might just unintentionally end up with your head in a stranger's crotch. Whoops.

Look, the best thing you can do is laugh it off and let it go — even if it's difficult to look that person in the eye at your next class.

Accidentally Kicking Someone In The Face During Down Dog

Downward facing dog feels great during yoga class, and three-legged down dog feels even better for your hamstrings in particular — but it's maybe not as great for the yogi on the mat behind you, who you may or may not have swiftly kicked in the nose as you found your way into the asana.

All you can do here is profusely apologize — and hope that it only leaves a faint bruise. Sorry, girl.

When You Get Lost In The Sequence Of Poses

Sometimes you get really into the sequence that your favorite yoga instructor is teaching, to the point where you quite literally get lost in the combinations of movements and breaths. You close your eyes, vibe with the energy around you, and breathe mindfully — but when you open your eyes, you realize that everyone else is either moving through the poses on a completely different side of their body, or worse, they're doing completely different poses than you are. *Chuckles nervously*.

Again, it happens to all of us — just hop right back in whenever and however you can! Chances are, no one even noticed, and if anything, it's pretty awesome that you're that immersed in the sequence in general.

When You're Casually Sobbing In A Hip-Opener

Hip-opening poses can sometimes bring on a flood of emotions in the midst of a otherwise casual class. Like, one moment, you're thinking about what you're going to eat for dinner as you balance in tree pose, and the next minute, you're high-key sobbing in pigeon pose.

Look, as a teacher who sees this in class all the time (and who does it herself on occasion), let me assure you that crying in hip-openers happens a lot. It's simply because of all of the tightness you naturally store in your hips during your day-to-day activities. All of that tension builds up over time, trapping negativity and old feelings along with it. And when you finally release it, your emotions bubble to the surface, too. Let it flow, girl, and don't you dare hold back.

When You Start Snoring In Savasana

Don't act like you've never fallen asleep in corpse pose. Savasana is an optimal opportunity to melt into your mat and let go of stress, and pretty much every yogi can relate to the feeling of accidentally drifting off to sleep in this restorative posture.

Honestly, as long as you make sure that loud snoring isn't becoming a habit for you every time you get into this pose during class, you're fine. Everyone does it sometimes, but eventually, you might get a reputation as "that girl who always snores" if you keep letting yourself snooze in the studio.

More like this
25 Instagram Captions For Workout Pics & Being A #Boss In The Studio
By Marisa Casciano
I Tried Singing While Running Like Miley Cyrus & OMG, My Lungs
By Rachel Varina
The Netflix Reality Show You Should Watch, Based On Your Zodiac Sign
By Chelsea Jackson
Stay up to date